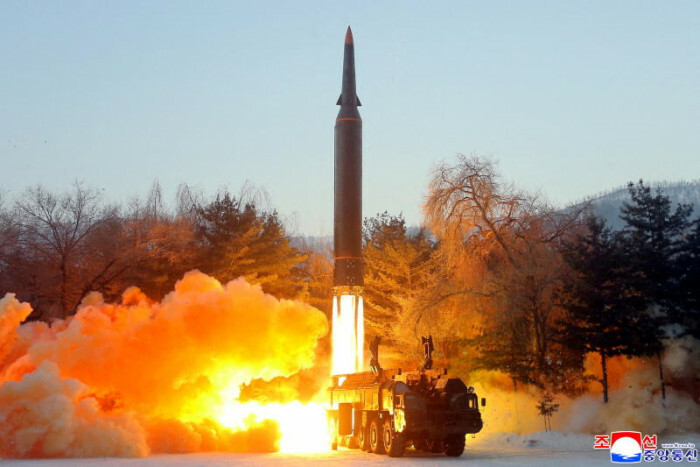 North Korea fired what appeared to be a ballistic missile into the waters off its eastern coast for the second time in less than a week, ratcheting up tensions as Kim Jong Un ignored calls for a return to stalled nuclear talks.

The South Korean Joint Chiefs of Staff said North Korea launched what appeared to be a ballistic missile at 7:27am. The missile traveled about 700 kilometres (400 miles) and flew at almost 10 times the speed of sound, the Yonhap News Agency reported without citing anyone.

The South Korea National Security Council and Japanese Prime Minister Fumio Kishida separately expressed regret over the launch, with Seoul urging North Korea to return to talks. The allies were working with the United States to analyse details of the launch, which Japan said likely landed in waters outside of its exclusive economic zone.

No other details on the flight were immediately available. North Korea typically does not comment on its launches until about a day after the fact.

Shares of South Korea’s so-called "peace stocks," which tend to benefit from talks between Seoul and Pyongyang, slipped Tuesday, led by a 5.2% decline in J.Estina Co. Hyundai Elevator Co fell 2.1%, while Shinwon Corp and Ananti Inc were down -2.7% and -2.8%, respectively.

The tests come days after Kim told a top ruling party meeting that he was more interested in bolstering his arsenal than returning to stalled nuclear talks with the US. In his remarks, Kim, who turned 38 on Saturday, urged North Korea to focus on easing food shortages and containing Covid-19 and suggested disarmament talks were a low priority in the coming months.

The latest launch follows what North Korea last week claimed was its second "hypersonic" missile test in about four months. The South Korean Defense Ministry subsequently dismissed those claims, saying they appeared to be "exaggerated" and Pyongyang still had not developed the necessary technology for hypersonic glide vehicles, which are designed to maneuver past missile defenses at high speeds.

Nuclear disarmament talks broke down about two years ago under former US President Donald Trump. In the meantime, Kim’s regime has continued to develop its nuclear weapons program, including with new weapons systems designed to evade interception by the US and its allies.

The Biden administration has said the door is open for talks and indicated it would be willing to consider economic incentives to reward North Korea for taking steps to wind down its nuclear arsenal, which has only grown as disarmament discussions have sputtered.

At the same time, North Korea's economy is now smaller than when Kim took power after his father, Kim Jong Il, died in December 2011, largely because of the sanctions to punish him for testing nuclear weapons and missiles that can deliver warheads to the US mainland.

In recent months, Kim’s regime has tested new weapons including long-range cruise missiles that could hit all of South Korea and most of Japan, a system to launch ballistic missiles from train carriages and a new submarine-launched ballistic missile. It has also resumed plutonium-producing operations at its main Yongbyon nuclear site, while satellite imagery shows it expanding a plant that enriches uranium for weapons.