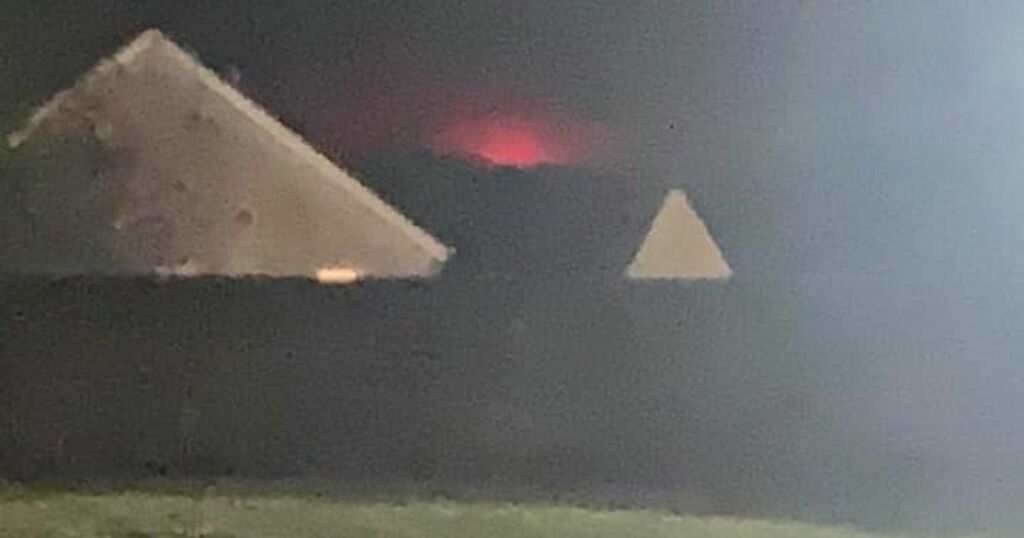 A mysterious red glow in the sky above a Scots village has left residents spooked.

Locals in Neilston, near Glasgow, have been left scratching their heads after the light appeared in the distance towards nearby Uplawmoor.

Residents have suggested everything from extraterrestrial activity to volcanic action after a stunned eye-witness took to Facebook to raise the alarm on Thursday night around 9pm.

Others were more concerned about the pyramid like shapes which appeared in view on the picture posted on the social media site.

The two triangle shapes can be seen in front of a large red glow in the background.

In the comments, a few were quick to suggest it may have been a blaze nearby - but the resident later confirmed that "it didn’t look like a fire."

A shocked local said: "Oh wow", while another added: "OMG we saw this that night."

A third person suggested aliens had arrived, adding: "Just driving out the unwanted. Nothing to worry about…"

Another said: "Maybe a volcano erupting like the Canary island's!"

For others there were more pressing matters, with one saying: "Never mind that, where did the pyramids come from?"

While the pyramid shapes were not accounted for, another resident was quick to rubbish claims of any extraterrestrial activity.

He said: "The red glow is there every night, it is the light on top of windmills, I see it from my back door every night."

One last person perhaps hit the nail on the head though, simply saying: "You've had too much to drink."