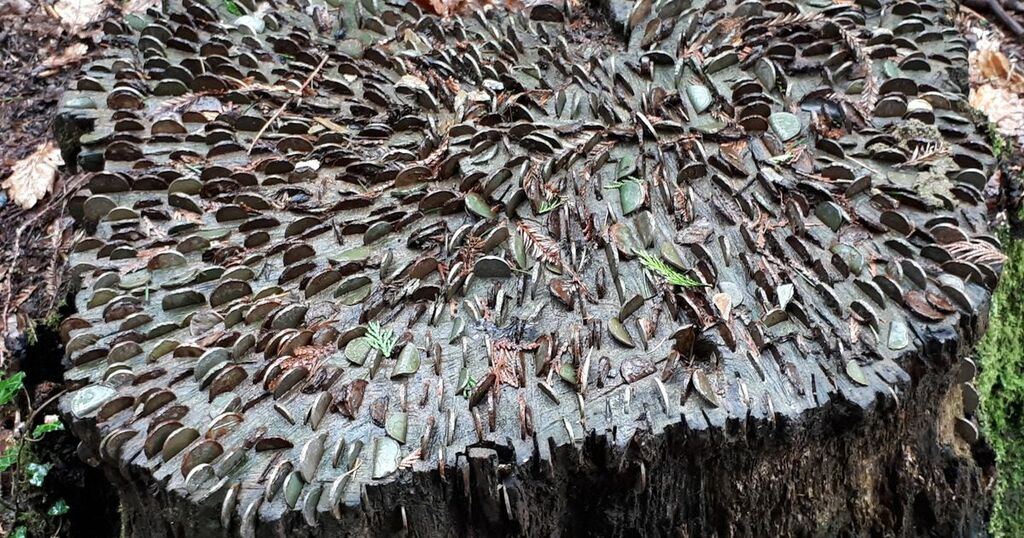 A video shared online has got people discussing the mystery of penny trees that can be found in Portmeirion.

Trunks were spotted as far back as 2011 with coins stuck into them and they even started to become popular tourist destinations in their own right.

Workers from the village realised they were being used as wishing trees - otherwise known as penny trees.

It is a tradition dating back to the 1700s across Britain.

One tree in Scotland was even found to have a florin wedged in, the coin was issued from 1849 until 1967.

These trees are often viewed as mysterious as it is believed that a person suffering from illness can lodge a coin into a wishing tree for a way to be healed.

On the other hand, removing a coin can cause an illness.

One penny tree by Dolgoch Falls in Llwybr Llywnog, near Machnynlleth, went viral on Tiktok with over 363,000 views and nearly 10,000 likes.

It showed a tree stump with hundreds of pennies hammered in, and the beautiful surroundings of waterfalls and rivers.

One commenter said, “Omg this is deffo a fairy tale land.”

Another said, “Such a stunning place. I will need to pay it a visit next time I’m up the A9.

One more said, “Beautiful the British isles truly are breathtaking.”

As beautiful as the stumps are to seek out and admire - in 2019 The National Trust issued a warning to no longer add to the coins.

They posted on Facebook, stating that the trend for hammering coins into ‘wish trees’ is damaging woodlands and should be stopped.

It said,:“We wish you wouldn’t do it - especially to live trees as it's harmful. Instead, why not donate the coins to the Trust so we can use them to conserve woodland and wildland.”

Where to find Wishing trees in Wales

Can you add to the list or have you visited a penny tree elsewhere? Be sure to l et us know in the comments and sign up on 2Chill to leave a recommendation.

As well as videos, tips and advice, we’ll also be sharing some dreamy places where you can Eat, Drink, Do & Chill.