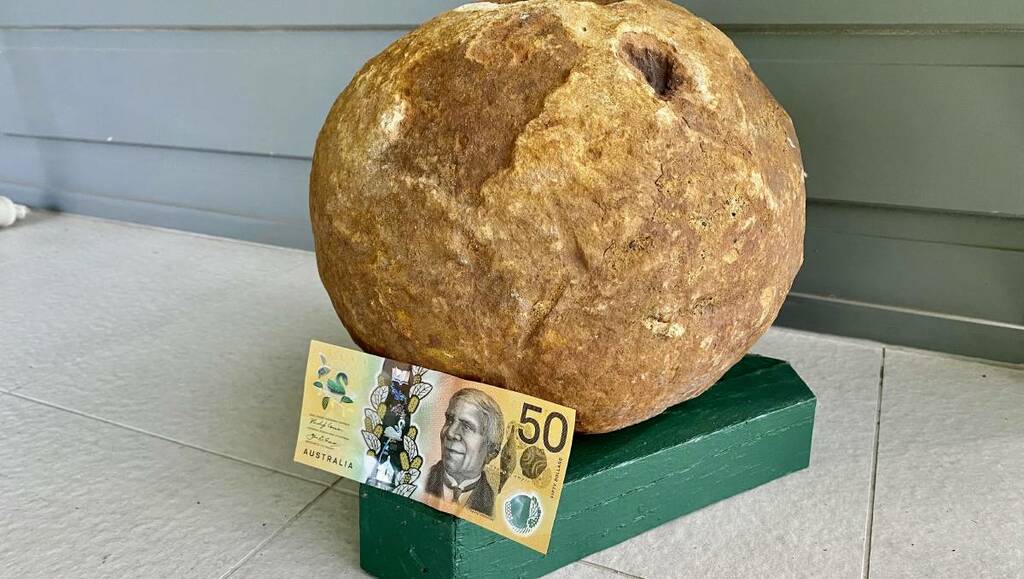 Boolaroo astronomy buff Col Maybury was excited to receive a phone call offering him a meteor.

As Col recalled, the call came 12 years ago from a bloke named Tom, of Nulkaba.

Tom told Col that his dad found a meteor in a quarry around 1922. He asked Col if he wanted it. My word he did.

Tom said he would deliver the meteor to Col. But a fortnight later, Tom called again.

"Dad died and I will bring that meteor down," he told Col.

This time, it turned up.

"A lovely bloke that Tom from Nulkaba," Col said.

But it wasn't a meteor.

"It was nearly perfectly round, a hard sandstone rock," he said, adding it weighed about 30 kilograms and was 30 centimetres wide.

Col contacted his geologist friend at University of Newcastle, Dr Bill Landenberger, who immediately identified it as a concretion.

Apparently they are often mistaken for dinosaur eggs, turtle shells and bones. And meteors, of course.

They're not fossils, but sometimes they contain a fossil. They are a common geological phenomenon found in sedimentary rock, including sandstone, shale and limestone.

The concretions form a kind of nest for themselves.

"I have since seen the empty nests in Abermain Swamp Creek and on the foreshore at Cape Otway, Victoria," Col said.

"I have inspected them embedded in sandstone, atop hills above Wollombi."

NASA has pictures of blue concretions on the surface of Mars. It nicknamed them "blueberries".

The Opportunity Mars rover's investigation of the "hematite-rich concretions during the rover's three-month prime mission in early 2004, provided evidence of a watery ancient environment".

Col said his concretion was "my pet rock".

"It requires no food, no exercising, no great affection, but I do love it and I am most grateful to Tom of Nulkaba and his dad who gave me a most appreciated example of this geological wonder of time, energy and limestone glue with a touch of red iron."

Analysis of the rocks may help scientists piece together the timeline of the area's past, which was marked by volcanic activity and periods of persistent water.

"It looks like our first rocks reveal a potentially habitable sustained environment," said Ken Farley of Caltech, project scientist for the mission, which is led by NASA's Jet Propulsion Laboratory in Southern California.

"It's a big deal that the water was there a long time."

The rock is basaltic in composition and "may be the product of lava flows".