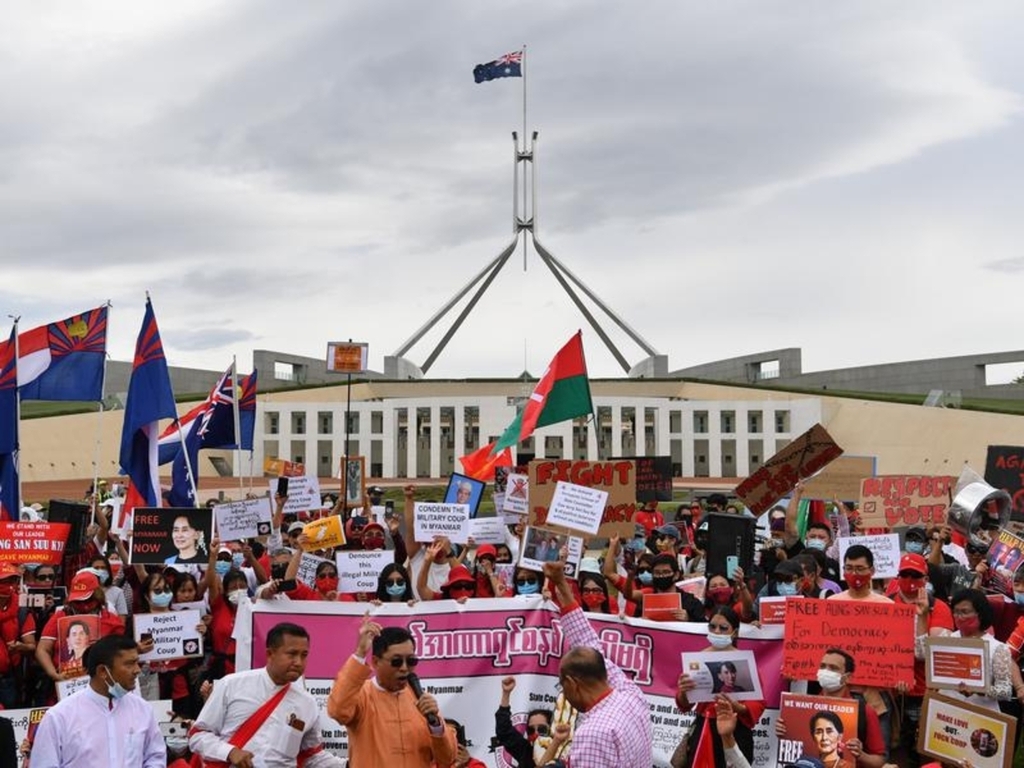 Alongside assignments and exams, international students from Myanmar are regularly changing their phone numbers and worrying about family members back home being arrested by a hostile military.

Speaking on the condition of anonymity for his own safety, a student at an Australian university says his country is in danger of descending into civil war following a February 1 military coup.

"There's no day without bombing, without arrests, without people being killed," he said as he explained the contrast with typical university life.

"Your family is experiencing a horrible situation, more than 50 million people are suffering, people are dying and losing their loved ones ... and you're the only one who is studying ... trying to finish an assignment."

Measures to avoid surveillance are seen as a necessary precaution when communicating with people in Myanmar where the death toll has passed 1000 according to activist group, Assistance Association of Political Prisoners.

That's why students are changing their phone numbers.

Adding to the stress of studying abroad is the prospect of going home once scholarships expire.

The student said a number of people in that situation have already graduated.

"According to their visa, they can't stay here anymore," he said.

Immigration Minister Alex Hawke announced in May that Myanmar nationals in Australia on temporary visas may "apply to extend their stay until it is safe for them to return home".

"While the Australian Government is unable to extend timeframes on currently held visas, there are a range of visa options, both permanent and temporary, that Myanmar citizens in Australia may wish to consider," a spokesperson for the Department of Home Affairs said.

"In May 2021, the Department of Home Affairs wrote to Myanmar nationals holding temporary visas, inviting them to apply for new visa if their current visa is approaching expiry.

"Citizens of Myanmar, like all other nationalities, are able to lodge applications under the migration and temporary entry programs."

The situation in Myanmar escalated on February 7 when a shadow government comprising democratically elected politicians ousted by the military, called for a citizen's revolt.

In a video posted to Facebook, head of the National Unity Government Duwa Lashi La launched "a people's defensive war against the military junta".

"Following the coup, the people have not passed a day with joy" he said.

As well as offering a temporary home, the student said countries like Australia can help through measures taken by the UN.

He wants to see the UN diplomat U Kyaw Moe Tun and the National Unity Government recognised in preference of a military representative.

U Kyaw Moe Tun has, at the UN, publicly opposed military rule and represents the "civilian government".

Without his voice, some people fear the pro-democracy movement will be silenced.

On Tuesday the General Assembly's credentials committee is due to make a recommendation of who to recognise, which member states can either accept or take to a vote.

Australia has previously raised "grave concerns" about escalating violence and the rising death toll in Myanmar.

Foreign Affairs Minister Marise Payne in March condemned the use of lethal force and violence against civilians.

"Australia will continue to play a constructive role, including in consultation with international partners, particularly ASEAN, in support of the Myanmar people."