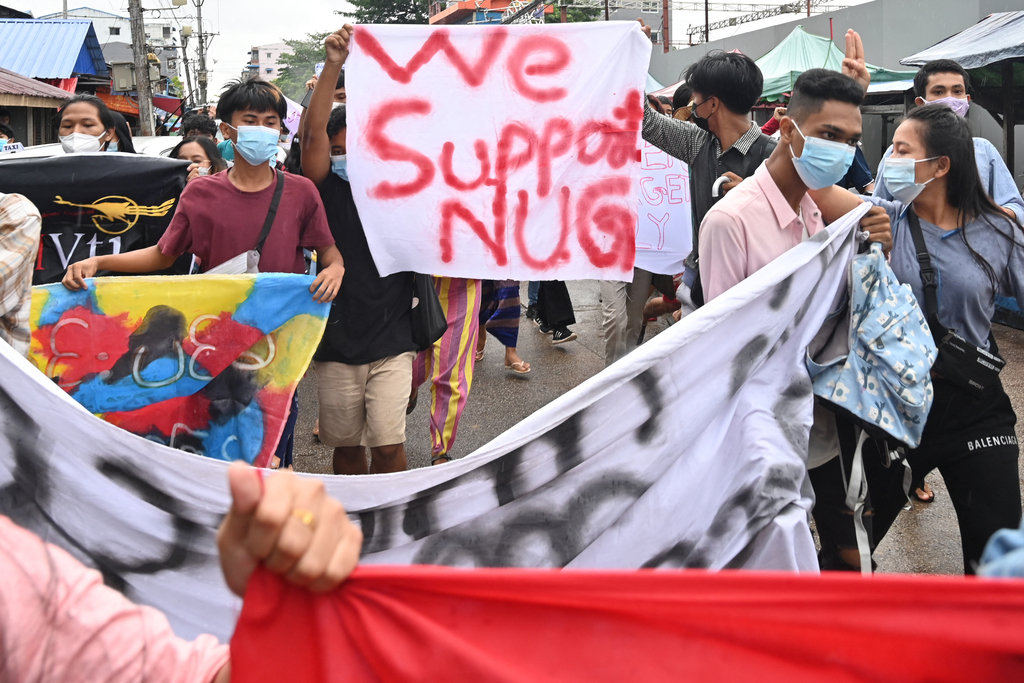 Myanmar’s shadow government has called for a “people’s defensive war” against the country’s military, prompting a flare-up in fighting in borderlands, according to media reports, as several powerful ethnic groups expressed support for the call to arms.

Duwa Lashi La, the acting president of the National Unity Government (NUG), formed by the elected legislators who were deposed in a February 1 coup, issued the call for the nationwide uprising on Tuesday.

“With the responsibility to protect the life and properties of the people, the National Unity Government … [has] launched a people’s defensive war against the military junta,” he said in a video statement posted on Facebook.

“As this is a public revolution, all the citizens within entire Myanmar, revolt against the rule of the military terrorists led by Min Aung Hlaing in every corner of the country.”

Myanmar has been in turmoil since Senior General Ming Aung Hlaing seized power from the elected government of Aung San Suu Kyi just as the new parliament was about to sit. The coup triggered widespread protests and a civil disobedience movement to which the military has responded with deadly force. More than 1,000 people have been killed, according to the monitoring group the Assistance Association for Political Prisoners with thousands arrested.

The crackdown has, in turn, triggered armed resistance to the military’s rule, especially in Myanmar’s borderlands, with opponents joining ethnic armed groups and forming People’s Defence Forces (PDF) to fight back.

Tens of thousands have been displaced in the violence.

Diplomatic efforts to end the turmoil have failed to make much headway, however, despite sanctions from Western countries and pressure from Southeast Asian neighbours.

In his video, Duwa Lashi La accused the military of committing “war crimes” against innocent civilians and called on ethnic groups to “immediately attack” the military and to take full control of their lands.

He also ordered the PDF militias to “target to control the military junta and its assets” in their respective areas.

Military-appointed bureaucrats must resign from the government, he said, urging border guards to “join with the people and attack the people’s enemy” and forbidding civil servants from going to work.

He also advised members of the public to “avoid unnecessary travel” and to stock up on supplies and medication.

“We will remove Min Aung Hlaing and uproot dictatorship from Myanmar for good,” he said, “and be able to establish a peaceful federal democratic union that fully safeguards equality and is long-aspired by all the citizens.”

A spokesman for the military dismissed the NUG’s call, suggesting it was an attempt to seek attention ahead of the United Nations General Assembly, which begins in New York next week.

“They are inciting [others] to commit more violence and for the public to become terrified and for instability,” General Zaw Min Tun was quoted as saying by local media. He called the NUG “extremists” and told the public they “do not need to worry”.

The NUG’s call was followed by reports of a flare-up in fighting, according to local media, with several ethnic groups including from the Shan, Kayin and Kachin states expressing solidarity with the shadow government.

VIDEO – Myanmar Now spoke to leaders of ethnic armed organisations and local resistance groups who have cautiously welcomed this morning's (Sep 7) announcement by NUG that the people’s “resistance war” against junta had started. https://t.co/2HeVT6f2w8#WhatsHappeningInMyanmar

A firefight broke out between Myanmar junta forces and Kachin Independence Army troops in Homalin Township, Sagaing Region on Tuesday morning, after the shadow National Unity Government declared war on the junta, according to Kachin State-based media.#WhatsHappeningInMyanmar pic.twitter.com/skqPzKFHep

The Myanmar Now news portal reported a bomb attack on a police checkpoint in Mandalay, the country’s second-largest city, as well as multiple protests across the country.

Following the NUG's announcement of the start of people’s “resistance war” against Myanmar's junta this morning (Sep 7), members of the military are conducting more checks in Yangon.

Richard Horsey, an analyst with the International Crisis Group, said NUG’s call to war “has energised Myanmar popular opinion and raised expectations the revolution will now shift into higher gear”.

“Meeting expectations is the next challenge,” he said in a tweet. “Either war, military’s determination to hang onto power means future of violence, poverty for many”.

Others said the NUG’s call to arms reflected a failure on the part of the Association of Southeast Asian Nations (ASEAN), a 10-member regional bloc that recently appointed a special envoy to Myanmar to open talks between the opposing sides.

“ASEAN is seen to be a military ally and the envoy weak,” said Bridget Welsh, a research associate at the University of Nottingham’s Asia Research Institute Malaysia. The envoy, Erywan Yusof, Brunei’s second minister for foreign affairs, has “not respected the shadow government” in his recent dealings with the group, she told Al Jazeera.

“Most see ASEAN as not only doing too little too late but also too in the pocket of the brutalisers. ASEAN needs to do more to legitimise itself with the NUG and given the envoy’s lack of credibility this should come from member states who are less accepting of the junta’s crimes.”