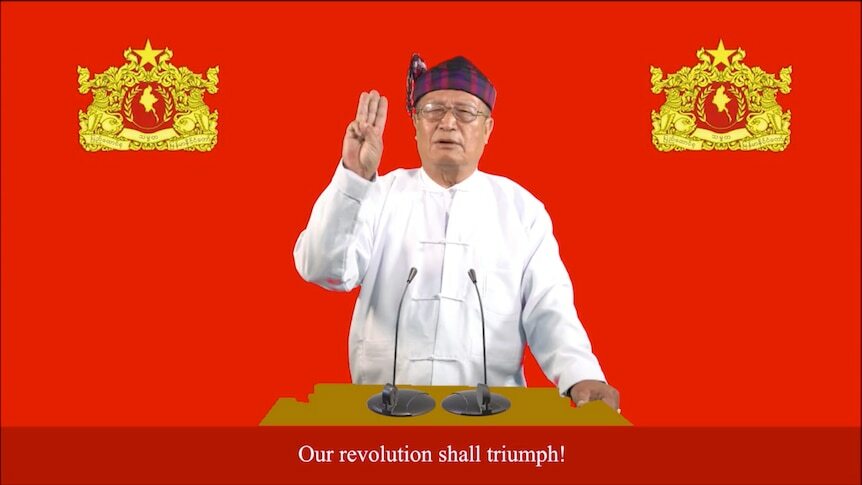 Myanmar's National Unity Government, formed by opponents of the country's military coup, has urged all citizens to revolt against the junta government.

Formed two months after the February 1 coup, the National Unity Government (NUG) is comprised of ousted politicians and the heads of many of Myanmar's ethnic groups.

He also called on soldiers, police and civil servants to defect to the "public revolution".

"Following the coup, the [Myanmar] people have not passed a day with joy. It has been eight months since the military continuously and cruelly murdered, tortured, detained and imprisoned using many laws," he said in the subtitled video which lasted almost eight minutes.

"As this is a public revolution, all the citizens within [the] entire Myanmar, revolt against the rule of the military terrorists led by Min Aung Hlaing in every corner of the country."

The junta has previously branded the NUG and People's Defence Forces as terrorist groups.

It said on Tuesday a call for revolt by the shadow government was a bid to gain international attention and recognition from the United Nations General Assembly that would not succeed.

The NUG is seeking to destabilise the country, including disrupting a national coronavirus vaccination programme, but is heading for failure, military spokesman Zaw Min Tun said, according to the Telegram channel of the army-owned Myawaddy television.

As part of the revolution, Duwa Lashi La said that civil servants, including those recently appointed by the military, should "immediately leave" their positions and stop being "deceived".

"From today onward, all the civil servants under the military council, we warn and forbid you from going to the office," he said.

"All the Border Guard Forces (BGF) and all the militias being deceived by the junta ... from now on, join with the people and attack the people's enemy.

Spokesperson for the NUG, Dr Sasa, told the ABC the NUG's declaration was about formally laying out a strategy to topple the military regime and unite the people.

"The only way to make the junta weaker is for the people's revolution to coordinate together," Dr Sasa said.

"This is the only option left, there is no other option like diplomatic options or political options."

Dr Sasa, who goes by one name, said it was also important to show the international community that the people of Myanmar remain steadfastly opposed to living under a military dictatorship.

"We will no longer live in fear."

Since February's coup, the South-East Asian nation has descended into chaos, with months of clashes between pro-democracy protesters and security forces.

According to the Assistance Association of Political Prisoners (AAPP) activist group, the official death toll passed 1,000 last month. The toll does not include members of the security forces.

Earlier this week, Myanmar's military rulers agreed to an ASEAN call for a ceasefire until the end of the year to ensure the distribution of humanitarian aid.

That was after the efforts of ASEAN envoy, Erywan Yusof, who proposed a ceasefire with Myanmar's Foreign Minister Wunna Maung Lwin on Sunday.

He said the military had accepted the ceasefire to "ensure safety [and the] security of the humanitarian workers" in their efforts to distribute aid safely.

Mr Erywan added that he was negotiating with the military over a visit to Myanmar in late October, where he would seek access to ousted leader Aung San Suu Kyi.

But pro-democracy groups were unimpressed by the Myanmar junta's concession, saying it could not be trusted to stick to the deal.

During his Facebook address, Duwa Lashi La warned NUG supporters to protect themselves during "the people's revolution" and prepare for tougher times.

"Arrange to protect the safety and lives and properties of the people in your respective villages and towns ... avoid unnecessary travelling and mind your personal safety," he said.

"Save necessary supplies and medications.

Pro-democracy activist, Thinzar Shunlei Yi, told the ABC the people's war began when the military seized power, but she believed there would be more defensive action now.

She said she thought one of the reasons the NUG wanted to formally declare the revolution now was to bring international attention back to the situation in Myanmar.

In one week's time at the UN General Assembly (UNGA), its credentials committee will have to decide what to do about Myanmar's membership with the body.

"I hope [the NUG declaration] will raise international awareness of what is happening to the people in this country because we have been killed almost every day, and we have been tortured and arrested," Ms Shunlei said.

After the credentials committee makes its recommendation there will then be a vote by the UN General Assembly's 193 member states, including Australia.