'My wife and son were told they should say goodbye': Dad's warning after he lost legs and hands to meningitis 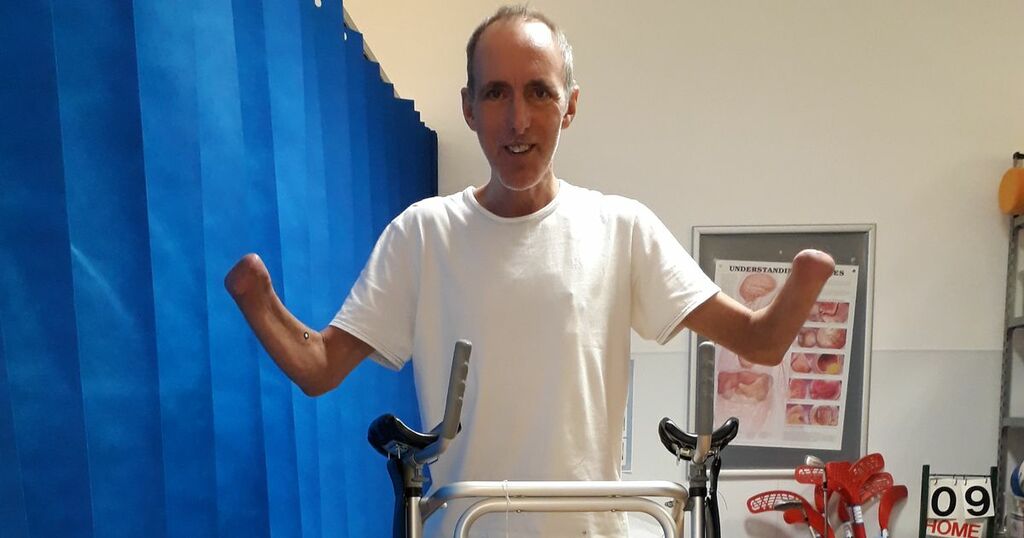 The family of a beloved husband and dad were told 'multiple times that he would not make it' after he contracted meningitis on Christmas Eve.

After spending 10 weeks in intensive care, where he lost his legs and hands to the vicious infection, he miraculously survived.

Now, Mike Davies, from Manchester, is helping other people living with amputations after their battles with meningitis.

READ MORE: Everything you need to know about the vaccination roll-out for children

Mike and his wife, Julie, had just moved to Brighton from Manchester when he contracted bacterial meningitis on Christmas Eve 2017.

Mike spent 10 weeks in intensive care at the Royal Sussex County Hospital, where he faced the amputation of his legs and hands in order to save his life.

“I was mostly unaware of what was going on,” Mike remembers.

“But my family had it tough. My wife Julie and my grown up son Rory were told multiple times that I might not make it, so they should say goodbye.”

With the help of medics, Mike survived and went on to spend the following months at Queen Mary's University Hospital, Roehampton, learning to walk on prosthetic legs.

He said: “I was determined at the outset to be the best version of me that I could be.

"To go to rehab and work hard at everything, so that I could be as independent as possible.

"To surprise people, and to lift as much of the burden as I could from my family.”

Over the years Mike has adapted to life after limb loss, and can now do many of the things he did before – including driving.

“You should see people’s reaction when they see someone with no hands or legs get into the driver’s seat!” he said.

Mike now has a motto he lives by.

The 62-year-old is sharing his experience of living life after limb loss for a new peer support programme called Meningitis & Me - designed to help other people living with amputations.

Mike is offering practical tips for fellow amputees, as well as advice on the mental challenges of life following meningitis, including advice on coping with depression.

The series of online videos offering practical tips and advice has been launched as part of Meningitis Awareness Week, which stretches from September 13 to 19, organised by the charity Meningitis Research Foundation (MRF).

“Mike is an inspiration to us all, whether or not we have suffered limb loss. We know that his story, and the other stories featured on our new Meningitis & Me platform, will provide invaluable advice to people living with amputation and their families.”

Freely available to all, Meningitis & Me enables those affected by meningitis to share their experiences, tips and advice.

Visit www.meningitis.org/meningitis-and-me to watch the videos.