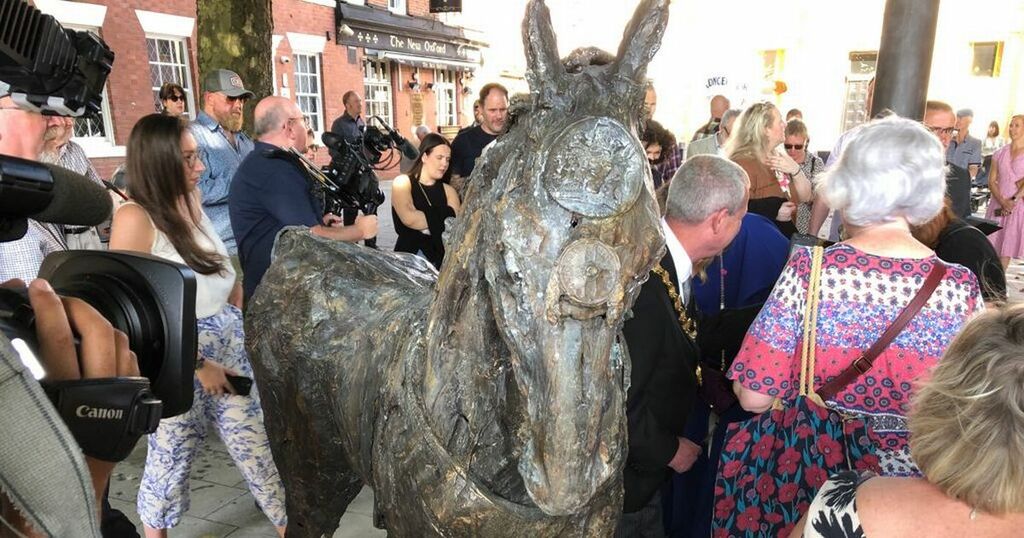 The toil and talent of generations of Salfordians now stands immortalised in a bronze statue at the heart of the city.

At over eight feet tall, the horse and lamppost pay homage to Salford's rich cultural history and its proud historical achievements.

It includes sayings from the city's great modern artists, including Joy Division and New Order founder Peter Hook's own 'Salford Rules' - which is painted on his stage equipment.

He told the Manchester Evening News : "I think it's important for Salford to celebrate a lot of things. My mentor Tony Wilson always used to say to me that he was sick of living in Manchester's shadow.

"Salford is a great place. It's much maligned, but it's on the way up, and you couldn't think of a better place to be here - next to the old town hall, that actually refused to give me a job when I was 16, which I still hold it against them.

"I've always felt that Salford gave me my spirit - my mother and father, Langworthy, Ordsall, I lived in Ordsall for a long time - I'm very proud of it and I'm happy to celebrate it and push it whenever I can.

"My whole life is written on these streets."

The sculpture features pages from literature - a nod to Salford being host to the first public library in England, which opened in 1850.

It includes quotes from the likes of poet John Cooper Clarke, Happy Mondays star Shaun Ryder and actor Albert Finney, who gave permission for one of his most famous quotes to be used six months before his death in February 2019.

Merseyside sculptor Emma Rodgers, who worked on the statue in her garden during the pandemic, says the lamppost represents the first artificially-lit lights which featured in the city.

The horse, meanwhile, pays tribute to the animals which were used at the city's coal mines, canals and on its horse-drawn transport - with Salford the first city to have a horse-drawn tramway.

Peter said: "When I saw the research that had gone into this statue, it taught me a lot about where I live because in a funny way you always take it for granted.

"Education in any way to make you release what you can do, and what you can achieve, by far is the best thing.

"We all stand together in strength, that's the best way to do it. And more than at any time in the world, we need to do it now.

"It's lovely to see it, I think it will be treasured."

Many of Salford's contemporary artists like Peter had connections to Tony Wilson, the Factory Records and Hacienda founder from Pendleton, who died aged 57 in 2007.

Peter believes the new sculpture - at the scene of a famous battle between police and 10,000 protesters against unemployment on October 1, 1931 - would be right up Tony's street.

He added: "I think he'd love it. He loved s*** like this. We all do - as you get older you realise the things that are important in life.

"As I drove past before and saw all these people, it makes you realise what is important in life, people being nice and celebrating the city they were brought up in."

Addressing the crowd which assembled on Bexley Square this morning before the sculpture was unveiled, Coun Mullen reeled off Salford's achievements - from the opening of the Bridgewater Canal in 1761 and the opening of Peel Park as the country's first public park in 1846, to MediaCity UK a decade ago and the new RHS garden centre in Worsley earlier this year.

He said: "Salford men and women pioneered social and scientific advances, made personal sacrifices in war, helped women win the right to vote, invented Vimto and created music, films and art which are renowned throughout the world."

As much as the statue celebrates Salford's past, artist Emma Rodgers hopes it will educate future generations.

It features a QR code, which passers-by can scan on their smartphones to learn more about the artwork and the city's heritage.

Emma said: "I'm just relieved that everything went so smoothly and it's had a great response. Hopefully people will enjoy discovering a few things more about Salford.

"It's been a really interesting journey for me. It's Salford's history, from the railway system, the canal system, right the way through to contemporary artists."

Coun Stephen Coen, executive member for culture, leisure and sports, was one of the driving forces behind the £50,000 artwork - which was five years in the making.

"We're celebrating what Salford has done and recognising Salford's sons and daughters in three dimensions," he said.

"Tony Wilson was from Salford, Joy Divison were basically from Salford, Albert Finney - people always act surprised, and it's about time we started singing it from the treetops.

"It's just a reminder that a lot of cool people and a lot of cool events happened in Salford. Our neighbours in Manchester should know these things as well.

"It isn't a horse that looks like it's had an easy life, it's a horse that has struggled through the industrial revolution pulling canal boats along the Ship Canal.

"It's a horse with a story and character, and I think that connects with people. Life's hard and it's had a hard life."

Share your memories of Salford and thoughts on the new sculpture in the comments section below.