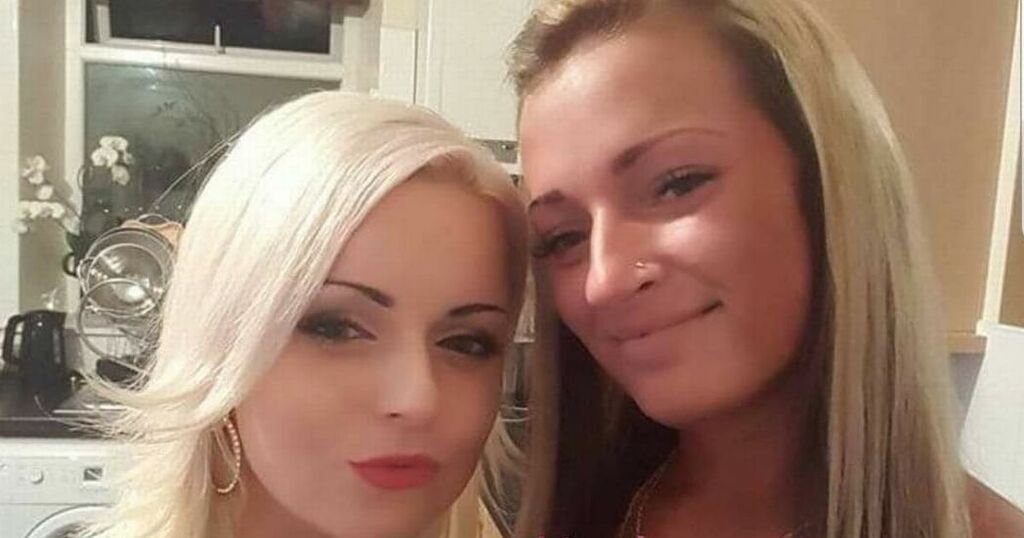 I had been through my wardrobe twice, looking, when the penny dropped. “Daniela,” I shouted. “Are you wearing my dress?”

A few moments later, my younger sister’s face peered around my bedroom door. “Sorry,” she said, with a guilty smile.

Daniela was two years younger than me and forever borrowing my clothes and make-up.

We were like best friends, as well as sisters.

My sister was a whirlwind, full of energy and enthusiasm.

She was hard-working – she had two factory jobs and she was training to be an accountant. She loved the gym, boxing, and had a passion for motorbikes.

And she was beautiful – Daniela had it all.

But I knew, more than anything, she wanted to settle down and have a family. In time I moved out and had a son, Aleks, now 11, and Daniela adored him.

“I want a baby of my own,” she confided.

But Daniela had been unlucky in love. That was until she met a boyfriend, Raja Rez, whose nickname was Jonny. He was a bit older and, like her, he loved motorbikes. They went out riding together.

At first, it didn’t seem too serious between them. Then, in October 2019, we went to Poland, our home country, for a family wedding.

To everyone’s surprise, Jonny knocked on the door. He’d travelled from Lancashire. “He just jumped on a flight and found me here,” Daniela told me.

She thought it was romantic. But I felt it was a bit odd. And he seemed to me rude and distant somehow.

When we returned to the UK, Jonny moved into Daniela’s home. He bought her jewellery, flowers and he proposed with a beautiful ring. She was ecstatic.

He worked long hours every day and she hardly saw him.

I started to notice she wasn’t her usual self. Usually, we spoke three times a day, but she began avoiding me. She stopped socialising with friends, too.

Once the party animal, she was now stuck indoors.

“We’re just a bit short of money, that’s all,” Daniela told me. “Jonny had some debts. I’ve been helping him out.”

“How come he needs your money if he works such long hours?” I asked.

But she couldn’t say.

I was getting worried. Then, Daniela – a qualified accountant by this time – confessed that Jonny had taken charge of her money and her work laptop. He’d even fitted a tracker to her car, to keep an eye on her.

“You have to leave him, please,” I begged Daniela as alarm bells rang in my head. “He’s no good for you.”

But she just accused me of trying to spoil her happiness. I knew she wanted children and she saw Jonny as the answer to her dreams. In November 2019, she announced they would marry that month.

Jonny had been married before, she said, but was divorced.

I was really upset. But I was wary of confronting him and alienating Daniela. Jonny was taking care of all the wedding arrangements, and Daniela was so excited.

They were supposed to be having an Islamic ceremony, then a big party, and a civil ceremony at a later date, according to Jonny.

On the day of the wedding, I did Daniela’s hair and make-up for her. She looked so beautiful. We hugged and, for a moment, it was like old times.

“Remember we’re having a big meal after the wedding, so don’t eat beforehand,” she reminded me. I nodded and smiled. But deep down I felt she was making such a big mistake and hoped she would pull out.

To our surprise, instead of the ceremony we had expected near our home in Lancashire, Jonny took us to a house in Manchester for an Islamic wedding. I didn’t recognise any of the guests, either.

Nobody on Jonny’s side had bothered dressing up. There was an imam to officiate, but Jonny’s parents weren’t even there and he just shrugged, “They can’t make it.”

I felt so uneasy. And when it came to him signing the register, Jonny wrote a different name. What the hell was going on? There was no marriage certificate.

On the photos afterwards, Daniela smiled, but it wasn’t her usual beam. I knew she was putting on a brave face.

And then Jonny suddenly announced, “Right, unfortunately, the restaurant was booked up so that’s it. The wedding’s over.”

“This is a complete sham,” I mumbled, shocked.

But I couldn’t bring myself to confront Jonny over it. I knew it would upset Daniela too much.

Soon after the wedding, she called me to say she’d suffered a miscarriage. She was heartbroken. She later had another one, sank even lower, and rowed frequently with Jonny.

Then, in floods of tears, she turned up on my doorstep – with shocking news. She’d been to see his dad who told her that Jonny was living with his wife.

He’d been married to her all along. He’d spend his days with his wife, his nights with Daniela.

It all fell into place, why he had acted so strangely. By stringing my sister along and pretending they had married, he thought he could have two women. When we confronted him at his cousin’s house, where he was staying, he casually said, “Yeah,I’m married.”

Angrily, I shouted, “How could you lie? You’ve broken her heart!” Then he lunged at me shouting in my face, “F**k you!” We dartedpast him and escaped.

“Promise me you’ll never see him again,” I pleaded to Daniela. “I promise,” she replied.

And for a while, she seemed to get stronger.

In July 2020, she bought a new house, a fresh start. But just a couple of weeks later, I was stunned to see a new photo of Daniela and Jonny on social media.

I asked her how she could go back to him after all he’d done. He’d told her he’d left his wife for real this time, but I didn’t believe a word of it.

Then on 8 August last year, my dad called me. I knew, from his voice, something dreadful had happened.

My heart dropped like a stone inside me. Dad had gone round to see her, to check that she was OK. Instead, he found her body.

“No!” I screamed. Daniela was only 28, with her whole life ahead of her.

The police came but they were unable to trace Jonny. He’d been seen out with his wife and children on a trip to Blackpool the day after Daniela died. After that, he seemed to have vanished.

We had to plan a funeral. I chose a white coffin and we had a motorbike procession after the ceremony. It broke me saying my final goodbyes.

Meanwhile, the police began looking for Jonny. As the last person to see Daniela, they needed to speak to him.

But later, they told us that Jonny was formerly known as Rezwan Javed, and was 44. He’d been jailed in 2011 for a £1 million fraud with his brother Rehan Javed – he had lied to Daniela every step of the way.

An inquest this June heard how Daniela took her own life. The hearing was told Jonny was said to have lived a double life with two different wives.

At the inquest there was evidence he had been violent towards Daniela, used her home to grow cannabis plants in, and stolen money from her.

Apparently texts and calls between Daniela and Jonny in the days leading up to her death had upset her so much that she’d told a friend she “couldn’t live any more”.

Giving evidence, DI Paul Langley said the police were satisfied there was no third party involvement in Daniela’s death, but they still could not track down Rezwan Javed.

He is still at large now.

My sister was beautiful, hardworking and intelligent. She had her whole life ahead of her, yet Jonny broke her down until she was a shadow of the person she had been.

If you need to talk, telephone Samaritans free on 116 123