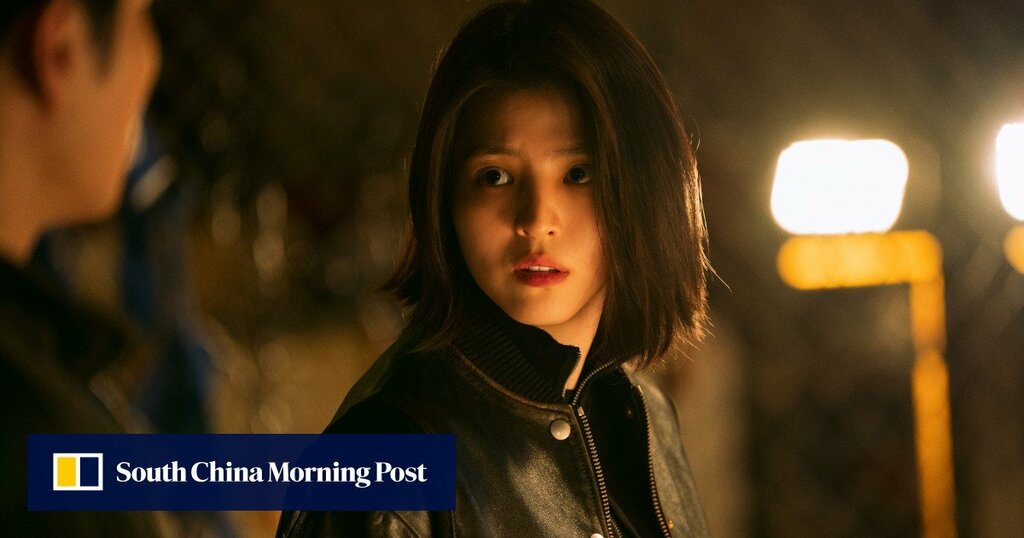 Han So-hee, recently seen in The World of the Married and Nevertheless, leads the cast as a young woman who teams up with a crime boss and infiltrates the police to track down her father’s killer.

Painted in red, black and brown tones and spiced with liberal amounts of violence, this series throws many well-worn thriller tropes into a pot and boils the mix into hard-boiled noir. Everything is turned up to 11 in this gritty eight-part series.

Han plays Yoon Ji-woo, a high school student whose life starts to get very complicated when her father becomes a wanted man. Known as a drug dealer’s daughter, she is bullied by her classmates and asked by her principal to leave the school on her 17th birthday.

Fuming as she leaves her office, she finally snaps and – in an intense single take – starts a classroom brawl with a half a dozen other girls. This will be the first of many tightly choreographed fight scenes in which Ji-woo faces off solo against a large group of opponents – though they become bigger, meaner and better armed as the series progresses.

5 new Korean dramas to look out for in October 2021

She returns home to find a cake and present from her father and later gets a call from him, the first time she’s heard from him in a long time. Sensing her daughter’s pain over the phone, he takes a risk and goes home to see her, but before he can open the door, a hooded figure brandishing a gun appears behind him.

In the stand-out scene from the show’s first three episodes, which just premiered at the Busan International Film Festival in South Korea, a helpless Ji-woo looks on through the keyhole as the mysterious assailant pumps lead into her father while he holds the door closed to keep her safe.

With nowhere else to turn, a despondent Ji-woo visits Choi Moo-jin, her father’s blood brother and the head of Dongcheon, Korea’s biggest drug cartel, which fills its ranks by packing topless muscle-bound young men into a dark and sweaty gym, where they pummel each other day in, day out, until they are pulled up to the syndicate and start wearing sharp suits.

Moo-jin is played with icy cool by the square-jawed Park Hee-soon, who seldom appears in dramas but has played countless tough guys on the big screen, in films such as The Suspect and The Witch: Part 1. The Subversion.

Initially turned away, Ji-woo soon joins the iron-pumping meatheads in the gym, where Moo-jin is impressed by her steely-eyed resolve and heartfelt desire for revenge. As the only girl among the recruits, Ji-woo is ridiculed and sexually harassed, but she’s no pushover and soon starts to level up.

In a giant cage-fighting competition, the scrappy Ji-woo, trained by Moo-jin to go for her stronger opponents’ weak points, emerges as the winner, in the process humiliating Do Gang-jae (Chang Ryul), her predecessor as newest recruit.

Kang-jae and a buddy plan to do something terrible to Ji-woo but she surprises them again and they ultimately incur Moo-jin’s wrath.

Ready to confide in Ji-woo, Moo-jin shares with her the few clues the gang was able to dredge up concerning her father’s murder, including the murder weapon, a police-issued gun.

As a mole for Dongcheon, Ji-woo enters the police force and, five years later, finally lands a position in the narcotics team of the Jinchang Police Department, which is headed by Cha Gi-ho (Kim Sang-ho), a man who mysteriously darkened her door shortly after her father’s death.

Ji-woo becomes Detective Jeon Pil-do’s new partner, and he isn’t happy about it. Pil-do is played with macho bravado by Ahn Bo-hyun, a role that is miles away from his romantic lead in Yumi’s Cells, currently airing.

Looking for clues to find her father’s killer, Ji-woo feeds Moo-jin information, but a new drug kingpin is on the rise, threatening Dongcheon.

My Name is the second Netflix Original drama in a row for director Kim Jin-min, who explored a very different but equally grungy world last year in teenage escort crime drama Extracurricular. His latest show is more stylised, with sharp editing, dynamic cinematography and a script by Hero and The Huntresses writer Kim Ba-da.

The adrenaline-fuelled opening hour rips through a simple set-up, and while things get a bit overwrought in the next episode, the sheer fun and energy of the story carries the show. It’s another matter once Ji-woo enters the police force; from this point on the story slows down considerably.

Yet plenty of time remains for the tempo to pick up again.

All eight episodes of My Name will start streaming on Netflix on October 15.