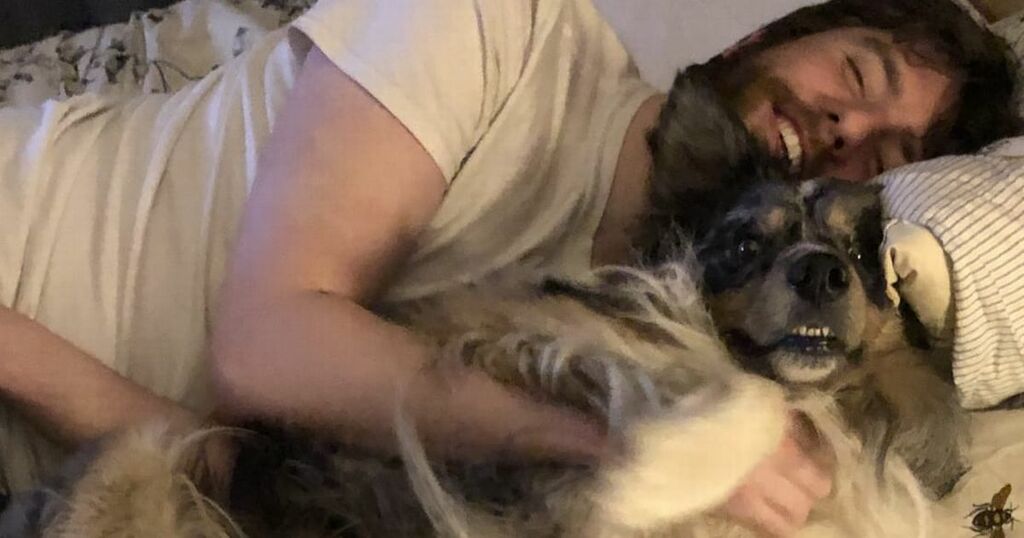 Last Thursday my partner Cathy and I got the fright of our lives when our beloved Border Collie - Ché - suffered from a seizure.

As a result, I wanted to write about the experience so that dog owners across Edinburgh and the Lothians will have an idea of what to do.

On Thursday January 6, I forced my partner out of the bed at around 05:30am as I smugly rolled over onto their warm side to get another 20 minutes or so in.

But whilst I was drifting off I heard a banging at the foot of the bed, at first I thought nothing of it as that is where Ché sleeps every night.

I assumed at first that he was just giving himself a scratch in the confined space between the wall and the bed frame and thus was just making a typical racket.

But panic began to set in after five seconds when the rattling failed to stop.

I jumped out of the bed and rushed to Ché but horrifyingly found him foaming at the mouth with his legs as stiff as the bed posts he was rattling against.

His neck was in an awkward position and my first thought was to get his tongue out of his mouth as you hear that is what you should do if a human suffers a seizure - this is not the case with dogs.

Dogs tend to lie on their side when having a seizure - my vet later informed me of this but not until after I had suffered a tooth right into the thumb (which I later required a tetanus jag for and course of antibiotics)- so therefore are extremely unlikely to choke on their tongue.

I then began to rub his chest and started to call his name in an attempt to bring him back to me as his eyes rolled to the back of his head.

It was at this moment that I genuinely thought I had lost my best friend in my arms and there was nothing that I could do about it.

My partner called the emergency vets and within another 20 seconds or so he had stopped having the fit.

He lay still as if frozen by the fit and even gave out a confused growl - something he has never aimed towards myself in the four years that he has been part of our family.

But after around five minutes he came back round, although he was still extremely disoriented and confused.

We were directed to take him to emergency vets at Chesser who ran some tests (at an astronomical cost) and thankfully his vitals and blood results were ok.

Our registered vets at Oak Tree then asked to have a look at Ché and they again confirmed that all his tests were coming back clear.

The vets have been unable to give us a diagnosis and have said that Ché should rest and that we should monitor him in the event that he suffers from another seizure. They added that it is important to try to time the seizures and to keep a log as well as to video in order to give vets the best chance of recognising anything that may help with treatment.

Advice given by the vet was that if the seizure lasts longer than 15 minutes then you should transport your dog to the nearest vets as calmly as possible.

We were also told not to touch our dog if he goes into a seizure or to talk to him as this will send the brain into overdrive when it is already struggling to cope - it can make the seizure last longer.

They were also able to prescribe diazepam, which is to be injected directly into the rectum walls in order to bring the seizure to a halt. But this must only be used if the seizure has lasted longer than two minutes.

“Seizure symptoms vary depending on which parts of the brain it affects - most seizures affect the whole brain, causing collapse, uncontrollable shaking, loss of bladder and/or bowel control, drooling, vocalising and limb paddling, but others only affect part of the brain, causing less obvious symptoms such as vacant stares or twitching. Seizures often happen unexpectedly, when a pet is resting quietly, but if your pet has regular seizures you might find yourself identifying certain triggers, or recognising changes in their behaviour beforehand (such as restlessness, pacing, panting or whining).

“If your pet is having a seizure, stay calm and clear a space around them so they can’t injure themselves on furniture or wires. Don’t try to restrain them - they won’t be in control of their movements so might hurt you, or themselves. Only ever move them if they are in a dangerous position, such as on the sofa (where they could fall off).

“Noise and light can make a seizure worse, so keep the area around them as calm, dark and quiet as possible. Move children and any other pets away, close the curtains, and turn any lights, TVs and radios off. Try to time how long the seizure lasts, make a note of all your pet’s symptoms, and if possible try to take a video of your pet whilst they are fitting. All of this information will help your vet to treat your pet.

*If your pet’s seizure lasts for longer than 2 minutes, or they have had more than one seizure in 24 hours, speak to your vet immediately, as they may need to be seen as an emergency.

“After a seizure your pet is likely to be dazed and confused. Give them somewhere calm and comfortable to recover, speak softly to them, and monitor them closely until you are comfortable that they have come round fully. If this is their first ever seizure, speak to your vet for further advice.

“Seizures are fairly common in pets, and although some experience them more regularly, fortunately, most only ever have one in their lifetime. There are several possible things that can cause a seizure. ‘Idiopathic Epilepsy’ (abnormal electrical activity in the brain with no underlying cause) is the most common – especially in pets between 6 months and 6 years old – but there are also other causes such as heat stroke, head injuries, poisoning, meningitis and in rare cases, brain tumours.

“We’re still not completely sure what causes idiopathic epilepsy, but we do know it’s more common in certain breeds and can be passed down from a parent to their offspring. Although there’s no cure – making it a lifelong condition – these seizures can often be successfully managed with medication and regular check-ups. Most epileptic pets go on to live very happy and settled lives.”

They also have advice for pet owners about seizures on their website here.