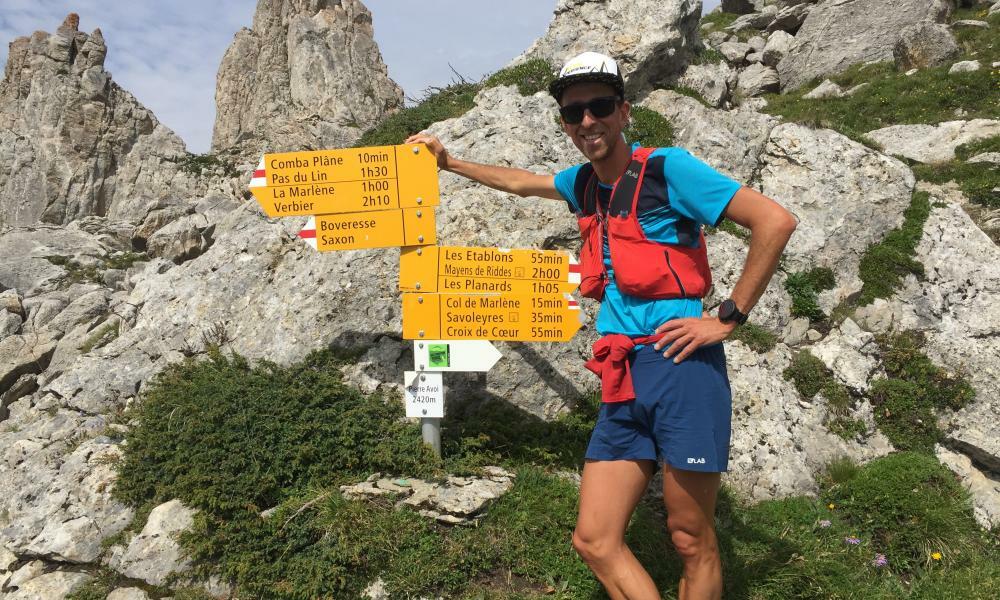 ‘Freedom. That’s what you’re chasing in the mountains.” I was hurrying along a slope below Mont Fort in Verbier to keep pace with Emily Vaudan, a trail running guide for new activity company Bee Heidi, and I kept stopping, trying to run but distracted by the views.

Every so often, she paused to shout encouragement – and a bit of life philosophy – as I gingerly picked my way over scree and shoogly stones that could easily snap an ankle. Mont Blanc and the Grand Combin massif encircled the skyline ahead; at 2,500m, unbroken views of Europe’s most spectacular peaks and glaciers were our hard-won prize.

“Trust your shoes,” Emily said, as the track rollercoastered along. As a bog-standard road runner, I was more worried about a perilous slip into the valley below.

“Trail running is about finding your natural balance and running instinctively – this is different to what you are used to.” And Emily should know: one of the best in the world, last September she competed in a heart-thumping 360km ultra trail marathon across the Swiss canton of Valais.

For those not in the know, Verbier is extreme sports territory. Free-ride skiing bosses winter, while come summer the surrounding Val de Bagnes offers some of the Alps’ trickiest downhill mountain-biking routes. The latest compelling argument to visit, however, is trail running. Here, the rewards for forgoing sedate country roads for extreme mountainsides and ridgelines are immense. And now that Switzerland has moved on to the green travel list, Verbier could be the perfect upgrade from the hills nearest your home (while you can trail run all year, for regular joes the season ends in late October or when the snow begins to fall).

Launched last summer, 21 trail running routes totalling 415km have been plotted high above the swish resort to give one of the world’s fastest-growing sports a timely, post-lockdown boost. Paths wend to backcountry spots far beyond the cable car crowd, and there is a glut of staggering mountain lakes and panoramas to revel in, as well as several spectacularly placed refuges where you can overnight.

A moment of stillness, and then we were chasing the light down the slope at a brisk pace

The overriding impression is that Verbier is primed for a trail running boom, which is why I’d joined a session with Bee Heidi. For those who don’t feel brave enough to go it alone (“What if I get lost?” swirled round my mind), the startup lets you simply choose the time, date and duration and the team does the rest for you. It’s like Uber, but for sky runners. You stay anywhere, book one of the 30 freelance running guides based across Valais, tell them your experience and group size and they plot a route to suit. Me? I was based in the cosy Bristol hotel in town – and asked for the easiest option.

That first morning, Emily and I tackled a beginner-friendly 10km. We penetrated a skirt of larch forest and were soon above the fall-line, scrambling over rocks. As I huffed and puffed, Emily talked about the misconceptions about trail running and why she does it: that the key is knowing when to slow to a fast walk and when to run; how, by nature, it should not be evenly paced; why she thinks nothing of running Verbier’s hardest trail – the 89km Tour des Cabanes – on a Friday night after her 9-5 office accounting job. “OK, you can call me crazy now,” she added.

Just as I was grappling with the art of rock-hopping, we arrived at Cabane Mont Fort. A legendary hostel at 2,457m on the long-distance Haute Route, it’s where gurgling cauldrons of cheese fondue are served with hunks of bread. No such carb-loading for me: stormy clouds had closed around us and we had a 1,000m descent into the valley before we could eat. A moment of stillness, and then we were chasing the light, down the slope at a brisk pace. First, into the cool of the forest, then skirting Alpine pastures in the company of nothing but bell-jangling Hérens cows.

As well as meandering along the Bisse du Levron, the 16km circuit climbs to the Col de Mines pass, where wild ibex scattered as we grew closer

On our return to Verbier, pizza was ordered at La Pergola restaurant and I wolfed it down. Hard work, this trail running lark.

The next day, cold sunshine lit up the summits and I couldn’t resist the lure of another trail. This time, I’d been invited to join running coach Candide Gabioud, who owns activity outfit AlpsXperience with his brother Jules-Henri. The pair are regular podium finishers in the world’s most gruelling marathons, including the 170km Ultra-Trail du Mont-Blanc, and Candide wants to convert road runners to the sport. But he also wanted to show me his favourite of the new running trails. Tight hamstrings be damned.

We were en route to Pierre Avoi, a piton of angular rock that punches obtrusively into the sky. As well as meandering along the Bisse du Levron, an ancient irrigation channel that wiggles along the mountainside, the 16km circuit eventually climbs to the Col de Mines pass, where wild ibex scattered as we grew closer.

For an hour or so, dog-tired and dizzy, I followed his whippet-like pace, until we made a quick stop at restaurant La Croix-de-Coeur to refuel. “I’m a sucker for dessert,” he said, “and sometimes an energy bar just doesn’t cut it.” That’s what trail running is all about, in my book: to see remote corners of mountains that few ever see, but also to have no regrets about pigging out on tarte aux pommes with cream.

If ever there was a landscape made for burning off calories at the same time as racing the sunrises and sunsets, it’s the Swiss Alps. In these mountains, it’s possible to find the freedom that trail runners like Emily and Candide seek; the abstract feeling of pushing above the clouds on to an Alpine ridge with clearcut views of the kind that only hikers dream of.

And with the Alpine air whooshing into my lungs, we hit the trail again. I got it now. I was converted.

• The trip was provided by Verbier. Hotel Bristol has doubles from £120 B&B. Verbier and Val de Bagnes trail running maps can be downloaded here. Bee Heidi offers tailor-made guided itineraries from £79 an hour, or £339 a day (£8 each additional runner). Trail running with Alps Xperience costs from £75 an hour, or £419 a day, for groups of up to 10