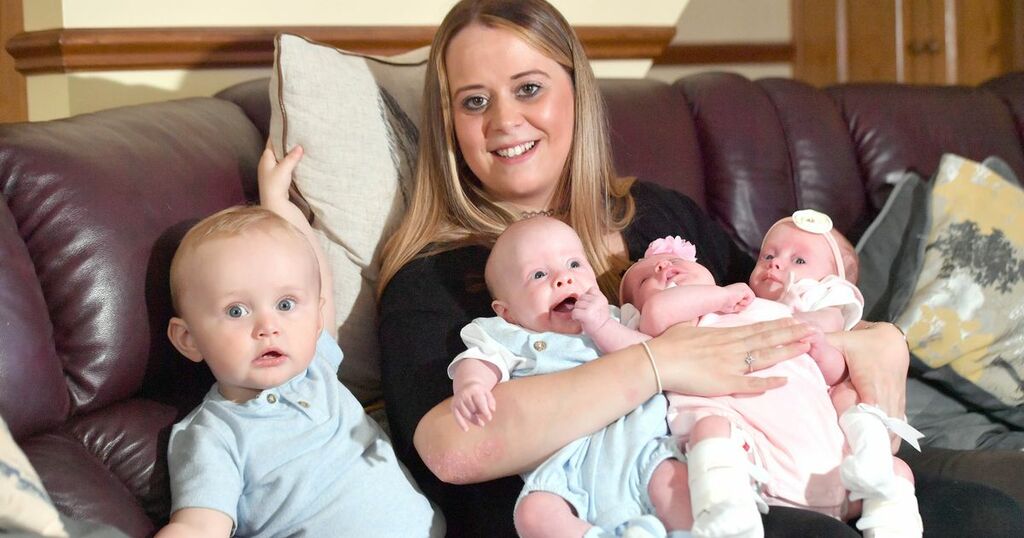 A mum who was told she might never have babies, has just become a mum-of-four kids under the age of one.

Medics told Vickie O'Donnell she would likely never conceive with her husband Jamie, due to her polycystic ovary syndrome.

However the 28-year-old welcomed triplets in June - less than a year after welcoming their first miracle baby, Phoenix.

Violet, Tarney and Rhubie-Ann's arrival in summer this year meant that the couple were parents to four babies under the age of one, WalesOnline reports.

Vickie, who is a twin herself, said life as a mum-to-four can feel like "a conveyor belt" - she wouldn't change it for anything in the world.

She said: "People see us walking towards them with the pram and you can see their faces glowing thinking 'look it's twins'!"

"Then they see the third baby and they're like 'Oh my God, it is triplets!"

"I honestly have no idea how many nappies we get through.

"The babies are all in different sizes too, so we have about three boxes on the go at any time.

"I absolutely love it though, I honestly would not change it for the world."

Vickie was devastated to learn she might never conceive a child and began hormone therapy to try and improve the couple's chances.

They were thrilled when they welcomed their first 'miracle' Phoenix, but just four. months later, Vickie and Jamie were told they were pregnant again - with triplets.

Vickie, from Abercynon, said: "I was screaming. At first the woman said it was twins, and I said 'I think you should look again because if it is twins what is the other one?' And I was just sobbing."

The triplets, now three-months-old, were born seven weeks in advance due to complications.

Vickie said parenting four babies at once is challenging and the couple are living with her parents to help them cope.

She said: "I would say the hardest part is when all four of them want feeding at the same time.

"So if the three babies are unsettled and want a feed, and Phoenix wants his dinner, that is definitely challenging.

"And I don't like to hear them crying, that makes me worked up then, that can be quite challenging, but I am never on my own.

"I am always with my mam or if she has popped out she is always close by. We live with my mam and my dad, they are our super heroes."

Vickie says evenings and night feeding are very busy for her with the babies all waking at different times so some times she gets next to no sleep at all.

She said: "It all depends on who is the most unsettled first really, so I will start feeding one then get them in the bath, then I'll pass them onto my Mam or Dad or Jamie who will all be home from work by then so they can get them dressed and into bed, then I move onto the next one then the next one.

"Sometimes I don't get back to sleep after their night feeds before Phoenix wakes up and we have to start the day.

"I don't know what I would do without my mam, often I'm feeding two babies and she has one. I'm a twin myself so it makes me appreciate what it was like for her."