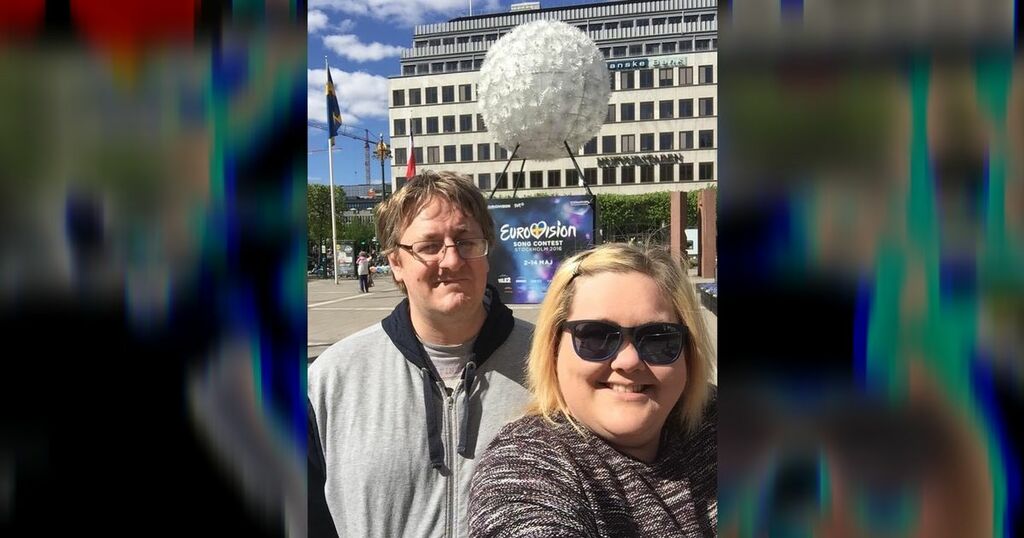 A mum is regularly stopped in the street as strangers think her son is a doll or wearing a wig thanks to his thick mop of hair.

Emma Mooney was stunned when her baby Charlie Foster was born with a shock of jet-black hair that stunned nurses and midwives commented on while he was in hospital.

Since then, the nine-month-old's hair has only got longer and more voluminous, with certification manager Emma quipping his enormous 'do makes him look like 'one of the Golden Girls'.

READ MORE: Owner of some of Liverpool's biggest bars text wife as he 'knew he was going to die'

Charlie's big barnet means Emma is stopped every time she leaves the house with stunned passers-by believing him either to be a life-like reborn doll or that he's wearing a wig.

Once the 35-year-old mum sets the record straight, they coo over his brunette locks and want to touch it.

Emma said that they were once stopped 11 times in just one day as strangers gushed over Charlie's hair.

The mum, from Kettering, Northamptonshire, said: "People stop us in the street all the time, it's like having a little celebrity.

"We can't go through a supermarket shop without people stopping us.

"Some people in a shop think he's a doll and that I'm just pushing a doll round in a pushchair.

"I've been asked if he wears a wig and he gets constantly mistaken for a girl despite dressing him like a boy.

"When people ask if he's wearing a wig I do think 'why do you think that? No-one's putting babies in wigs'.

"I used to say he looked like one of the Golden Girls because he had this incredible, enormous head of hair. It looked like he'd had it blow-dried at the salon.

"I was in Ikea the other day and someone walked past and she said 'oh my god your baby's hair is amazing', I get that quite a lot.

"I don't mind the attention at all, it's lovely.

"It takes me ages when I go out shopping with him. We went to Asda a couple of days ago. I only needed some bread and some milk and we were there an hour-and-a-half.

"I think the most I've been stopped in one day is 11 times with people stopping to ask about it and they want to touch it."

It was a case of real-life repeating itself online when the mum-of-one, who lives with 45-year-old transport planner partner Colin Foster, shared a charity shop bargain on Facebook modelled by Charlie.

The post was flooded with comments from baffled social media users quizzing Emma over whether Charlie, who was perched on a seat, was a doll or wearing a hairpiece.

Emma said: "In my Facebook post people said they thought he was a doll and asked if he was wearing a wig.

"Within a few minutes it reached 100 comments, it was crazy."

After posting her Facebook advert, she had to update it to read: "Edit: he doesn’t sit in it for long periods, thank you for your advice and yes, I promise he’s a real baby and that’s his real hair!

Emma suspected Charlie was going to have a good head of hair when she started experiencing severe heartburn during her pregnancy.

Emma said: "I had heartburn when I was expecting him. I had to send Colin out late at night to get me some Gaviscon in the last month.

"It's completely true, not an old wives' tale at all. I'm convinced it was because he was so hairy.

"He was born in January with a full head of hair and all the nurses and midwives all commented about how much hair he'd got.

"When I first saw him his hair felt like thick layers of silk. It was amazing, it was the softest thing you could ever possibly imagine touching."

Emma said: "When I see another bald baby I just think 'oh my god where's your hair?', it's so weird.

"I'm completely obsessed with his hair. It's more noticeable to me when I see another baby that doesn't have any hair.

"All of my male friends are completely jealous because he's got more hair than most of them.

"A lot of my friends' babies didn't have hair until they were two years old - even then not as much as his. I love it, it really suits him."

Charlie's locks grow at such a rapid rate that Emma had to book him in for his first haircut at the tender age of just four months old.

Emma said: "He hasn't lost any hair at all since he was born, it's just got bigger and bigger and longer.

"By the time he was four months old he had to have his first haircut as it was getting into his eyes and you could see it was annoying him.

"I remember taking him into the salon. I hadn't got an appointment, the hairdresser just looked at me and said 'what would you like doing?

"I said 'it's not for me it's for the baby'. She took one look at him and her jaw dropped to the floor.

"I sat in the chair and sat him on my lap. The hairdresser had some tiny scissors and he had a tiny bit trimmed off.

"He needed a second haircut at six months because his fringe was going into his eyes and covering his ears, so she gave him a little bit of a tidy up."

Despite having a lot of hair, Emma said that Charlie's hair care routine is surprisingly low maintenance.

Emma said: "Charlie's hair falls in a slight side parting, I have to brush it constantly otherwise it can get quite tangled or knotted.

"I just shampoo his hair but as it's so thick it takes ages to rinse it out and if I don't do it often enough it can look a bit lank.

"I towel dry it and then let the rest dry naturally, it looks lovely when it's freshly washed and is really glossy."

Emma said Charlie's hair, which is longer than his mum and dad's, has caught the attention of companies looking for hirsute tots to model their products.

Emma said: "Charlie's got longer hair than both Colin and I have, but we both have incredibly thick hair.

"Because he does look a little bit like a doll and he's got massive hair, he's quite striking.

"He's got a fairly new Instagram account and there's been a little bit of interest from a couple of companies that want him to do a bit of modelling."

Charlie will experience his first Halloween at the end of the month, and Emma said his luscious locks give her a few options of what to dress him up as.

Emma said: "We've got a little pumpkin costume for him for Halloween, but I think he'd make a good Dracula if we put gel in his hair and swept it all back."