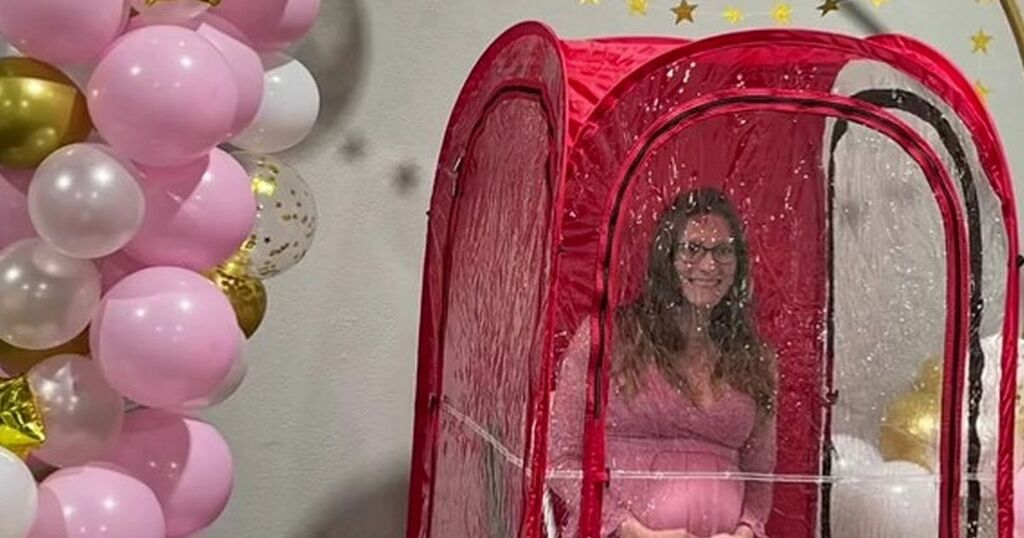 A mum-to-be who was determined not to miss her own baby shower after testing positive for Covid spent the entire day in a one-person tent.

Amber Mills had been planning the nursery rhyme-themed shower for two months when she discovered she had the virus.

The 27-year-old, who is expecting a baby girl in February, tried to reschedule the event but the $500 (£365) venue in her hometown of Houston, Texas, was fully booked.

Reluctant to miss out on the celebrations for her first baby, Amber purchased a $100 (£70) 'Under The Weather ' pod online, which are normally used by people watching sports, so she could still attend without infecting any of her guests.

But the expecting mum has come under fire over her decision and revealed that a third of her guests walked out when they discovered she was Covid positive.

Amber said: "I had a little bit of congestion and a stuffy nose. I brushed it off as allergies but I wanted to get tested because of the shower and didn't want to infect anyone.

"I'd been looking forward to it, planning the theme and buying decor. By the time I found out I was positive, we had all the food and a cake.

"I was upset because I thought I would have to miss this baby shower that I'd been planning for months.

"The original plan was that I wouldn't go until everyone had left but I ended up finding an 'under the weather pod'.

"I had seen them before and I was just laying there thinking about how I was going to have to miss my baby shower and it just popped into my head.

"I could be zipped up so the air I was breathing out wouldn't go near my friends."

Of the 30 friends and family members who showed up, 10 decided to leave when Amber's partner, Ethan, 37, announced she had Covid but would still be attending.

Since the baby shower on January 9th, Amber said she's been checking in with guests and none of them have tested positive for Covid.

Amber, who works at a car dealership, sent a friend to pick up the tent and arrived later than the other guests to give anyone who didn't want to be there a chance to leave before creeping in through the back door of the venue.

Amber said: "I don't think anyone thought it was a bad idea, people were telling me to come out.

"I had a mask on as well but everyone told me to take it off. No-one seemed to have an issue with me being there - people were glad to see me.

"My boyfriend opened the gifts for me so we weren't constantly zipping and unzipping the tent.

"It was weird sitting there and watching and not being able to get close and look at my gifts.

"We could talk and hear each other. After everyone had left, I came out and had my mum, dad, boyfriend, stepdaughter, one friend and one cousin there so I could have a look at all the gifts and have a slice of cake.

"I enjoyed it in the end even though it wasn't a traditional baby shower and Covid-wise, everyone who came to the baby shower is fine."

Since sharing a video of herself perched inside the tent at her baby shower on social media, Amber said people were split down the middle over whether it was a good idea or not.

"A lot of people have said it's a great idea, I kept guests safe but there were a lot of people saying it's dumb and I shouldn't have gone and I put people at risk.

"I don't feel like I put people at risk. I feel like I took every precaution I could to not spread it.

"I wore a mask and I let the people coming know I had covid so that it was their decision to stay.

"Ten or so people said they couldn't be around people because of their jobs and I respect that.

"When I tested positive, the paperwork they gave me said I needed to quarantine for five days but if I needed to be around people, I should wear a face covering.

"I have been quarantining apart from those 45 minutes. A lot of people are thinking I'm going to the supermarket and things like that and that's not the case.

"Just because I had my baby shower doesn't mean I'm not taking this seriously."

Some social media users accused Amber of putting lives at risk and threatened to report her while others praised her for trying to protect guests.

One commenter wrote: "If you were trying to protect those around you, you would have cancelled it. This isn't the flex you think it is."

Another commented: "Oh and I took the liberty of notifying the Texas dept of state health services."

However jumped to Amber's defence, arguing it was a 'brilliant' idea.

One wrote: "Leave her alone, she took her precautions. Those who went to see her definitely deserve to be there when the baby is born."

Another commented: "I totally appreciate that you're trying to protect those around you."