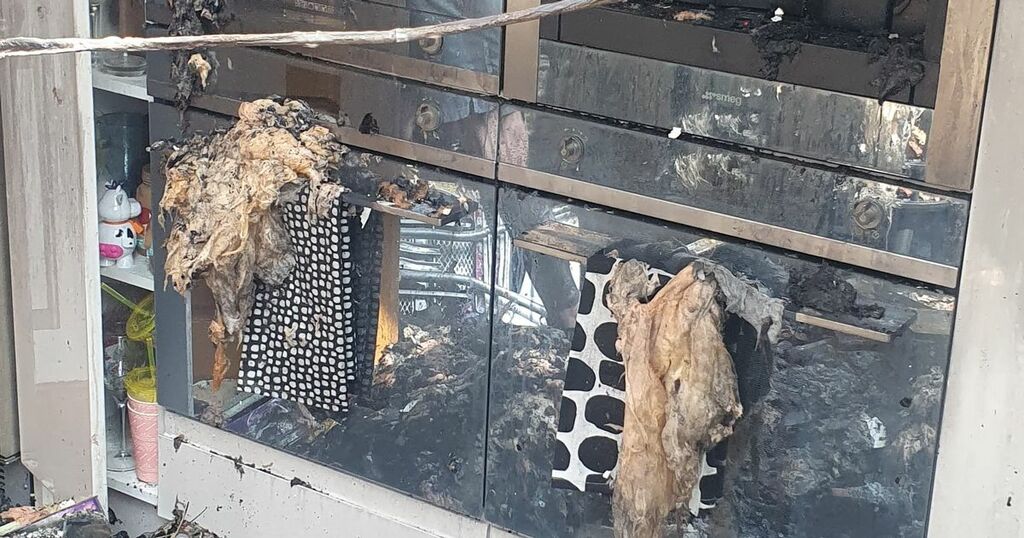 Scots family 'hysterical' and left with nothing after home completely destroyed in devastating fire
Andrea Loughrey, 51, husband John, 53, son Ben, 23, and daughter Zara, 20, of Kennoway, Fife, are 'distraught' after a…

Fire crews raced to the scene of the blaze at around 5pm on Friday, the fire in the village of…

Mum's fundraiser for firefighters after her home was gutted in blaze

A mum and her two sons who escaped a fire which wrecked their home near Bristol are appealing for help with a fundraiser - for the firefighters who rushed to save them and their most precious belongings.

And the family’s fundraising page for their local fire station has already raised seven times more than they initially hoped after their story touched the hearts of people in the village.

The fire left the upstairs of the home in Pill gutted, but the destruction would have been much worse had there not been a team of retained firefighters on call and based at the fire station in Pill.

In fact, one of those firefighters, crew manager Jamie Gibbard, lives opposite the home and rushed out of his front door to make sure his neighbour and her sons were safely outside, before shouting ‘I’m coming back’ as he raced to the nearby fire station.

He did come back, with the rest of the Pill-based fire crew, within seven minutes of the first 999 call.

But it is what happened next, and the way the local firefighters treated the family and their possessions that has caused the victim of the fire to start the fundraiser. Tracey Cosway said she is proud of her sister Teresa for starting the fundraiser, after watching as her house was almost destroyed. “Despite losing everything, my sister and her boys are raising funds for the firefighters who helped them,” she told Bristol Live. “It’s such a selfless thing to do. Their lives have been turned upside down and they are still thinking of others. They are still trying to find accommodation, as they have been told it will be a year before they can go back home.”

Teresa said the firefighters were so kind in the aftermath of the fire.

“I’m not sure how many fire fighters there were, but what I do remember is how supportive every single one of them was,” she said. “Checking to see we were all ok regularly and keeping us updated on everything happening.

“When we were allowed back into our house later that morning, I can’t begin to describe how distressing it was. The firemen that accompanied us were so supportive. One of them advised me not to go on the floor where the fire had destroyed everything, but instead agreed to do me a short video so that I could see it. I was distraught thinking about everything that we had lost,” she added.

But Teresa said she was overwhelmed to discover that the firefighters had moved all of the family’s most precious and sentimental things to a place of safety, to protect them from the fire and the jets of water used to put it out.

“When I walked into the lounge, I realised that the firefighters had removed all of the precious photos from the walls, and moved all my sentimental items into a safer place during the fire,” she said. “I don't have the words to explain how much this was appreciated. When I thanked them, they said that they were 'just doing their job'.”

She said she wanted to raise money for the local retained fire station, because she realised just how important it was to keep that station and support it in the village.

“So many people have asked what they can do to help and support me and the boys during the last week. That is such a difficult question to answer right now,” she said. “So instead, what I would like to do is to say a huge thank you to the Pill Fire Team for doing much more than ‘just their job’.

“I would therefore like to raise as much as possible to donate to their charity, and would ask you all kindly to make a donation. No matter how small, every penny will help these amazing people. Having a fire service in the village is something we need to support. It really does save lives,” she added.

The family set the Just Giving page target at £250 - and already within a week or so the amount raised is pushing £2,000. To check out the page and donate, click here.

Firefighters said the cause of the fire was accidental - and remarkably, Pill Fire Station’s crew manager Jamie later discovered the moment the fire spread rapidly on the upper floor was captured on his own doorbell camera - as well as him racing out of the house and to the fire station to return with his crew.

TeresaPill (Geopolitical Entity)
Sign up to read this article

Scots family 'hysterical' and left with nothing after home completely destroyed in devastating fire
Andrea Loughrey, 51, husband John, 53, son Ben, 23, and daughter Zara, 20, of Kennoway, Fife, are 'distraught' after a…

Fire crews raced to the scene of the blaze at around 5pm on Friday, the fire in the village of…