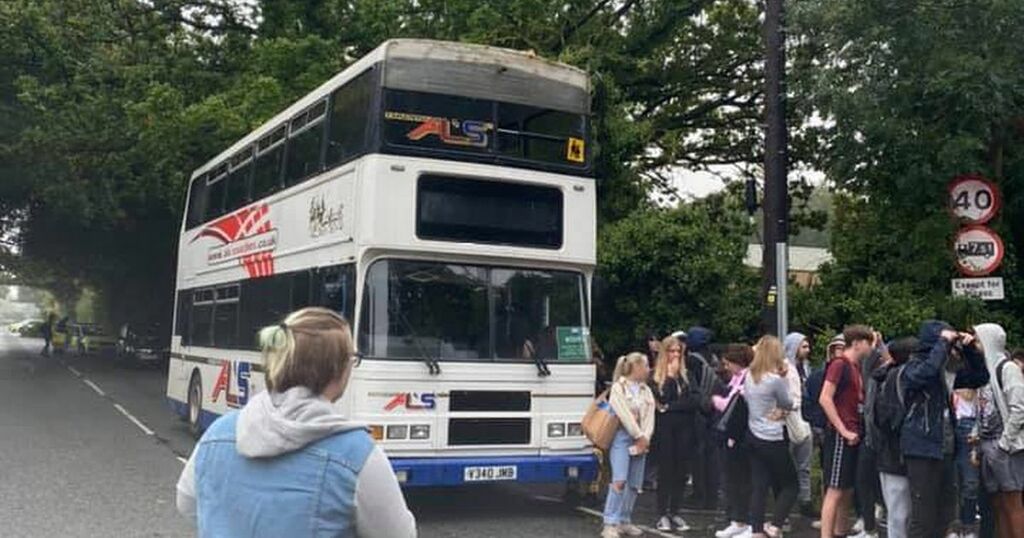 Students travelling to a Birkenhead college were forced to flee their bus this morning when it was hit by a tree.

It is believed two teenagers were hit by flying glass when a branch from the tree smashed into an upstairs window of the double decker bus.

One parent said she was left "picking glass out of her daughter's hair" after the frightening incident.

The bus, operated by Birkenhead-based company Happy Al's, was taking students from the Ellesmere Port and Neston area to Birkenhead Sixth Form College.

It happened as the bus travelled through a tree-lined stretch of road, at the junction of Mill Lane and Lydiate Lane in Willaston.

Sue Wright, a passer-by who witnessed the incident and helped administer first aid, said: "The tree had smashed through the front of the upper deck, and windows were broken.

"A number of students were covered in glass, two with minor injuries. Many of the students were crying and shaken, and one was having a panic attack."

A number of parents took to social media after the incident, which happened at around 8.30am today (Friday).

One said: "My daughter was on this bus by that window, I've just been picking glass out of her hair. Absolutely frightening."

Another said: "My daughter is on that bus, can't comprehend what she was saying when she rang me."

It is believed there were around 70 young people on the bus at the time.

Mike Kilbride, principal of the Birkenhead college, said: "The bus was driving along safely when a branch from a tree came through one of the upstairs windows.

"A couple of the students were hit by the flying glass but fortunately the injuries were minor, mainly cuts and bruises. They were treated at the scene but no-one was taken to hospital.

"Some on the upper deck were shaken up and they are taking the rest of the day off.

"A replacement bus was sorted out so students could continue to make their way to college. I've spoken to quite a few of them and they said it was an unfortunate accident but was unavoidable.

"I'm very thankful no-one was seriously injured. We've reached out to a number of students as it was a really unpleasant thing to go through."

A Cheshire Police spokesperson said: "At 8.30am on Friday 10 September police were called to reports of a collision involving a school bus after a tree fell on Birkenhead Road in Willaston. Officers attended and two girls were treated by paramedics with injuries believed to be minor."