Mum of quadruplets on her 'chaotic' days of 3am starts, 40 nappy changes and 32 bottles of milk 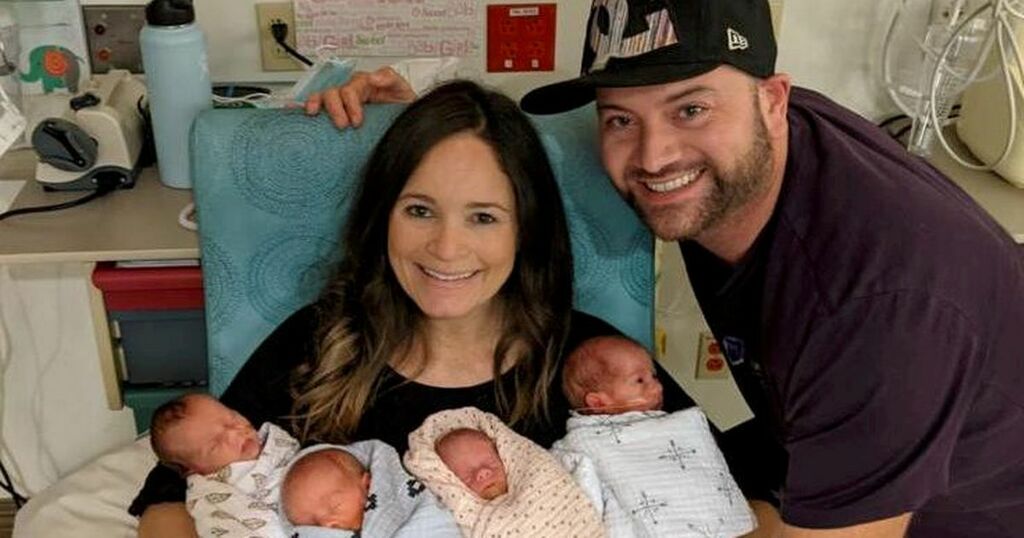 A mum of quadruplets has detailed her 'chaotic' mornings - getting up at 3am and going through 40 nappies a day and 32 bottles a day.

Santina Monreal, 37, welcomed not one but four babies through IUI with her husband, Adrian, 37, on 20th January 2021.

Since the couple have had to get used to being a family of six and juggle feeds, wake-ups and cuddles.

The busy mum starts her day at 3am to pump breastmilk before going back to sleep until 6am when she rises to feed them and get ready for work.

Luckily her husband, Adrian, is on hand to feed them throughout the day before she gets back at 7pm with another round of breastmilk.

Santina, a property manager, from Corona, California, US said: "I was feeding them every three hours to start off with.

"It was exhausting. They were going through 32 bottles a day and about 40 nappies. Now were down to 20 bottles a day - which is still a lot.

"It's a madhouse and exhausting but a dream come true to be a mum to four gorgeous babies."

The family spend £108 a week on five large containers of formula milk - which lasts a week and a half.

They must do at least four loads of washing a week to clean up the messy bibs.

"It gets very messy after each feed," Santina said. "We have so many bibs as we have to replace them each time."

As the babies are growing, they are also finding they are having to spend a lot on new clothes for them.

"I just bought the boys new pyjamas and now they look snug on them already," Santina said.

Adrian, an insurance broker, said: "I just bought £145 worth of onesies and they will probably only last a week."

But despite the now manic lifestyle the couple couldn't be happier as the pair had been desperate to be parents and have spent £11,000 on six IUI attempts before falling pregnant with the quadruplets.

In September 2017 the couple conceived naturally, but sadly Santina suffered a miscarriage - she was told she had a uterine septum which is a 'heart-shaped uterus' which can make miscarriage more common.

Doctors then removed her septum to correct the shape, but the couple struggled to conceive naturally again so turned to a fertility consultant for help.

Their second attempt was successful, but they lost the baby again and after five failed attempts they decided to give it one last go and were ecstatic to find out they were expecting in July 2020 and even more surprised when they found out they would be having quadruplets in August 2020.

After a nervous pregnancy, Santina gave birth on 20th January 2021 to two boys and two girls.

Thankfully after two months in Saddleback Memorial hospital, California, US, all the babies came home and they are now six months old and thriving.

Santina said: "I had felt so defeated. I thought maybe I just wasn't meant to have my own children. But then I got not one but four.

"It's been crazy. Having quadruplets is a lot to juggle. But I wouldn't change it for anything. They are such a miracle."

Santina and Adrian had nearly given up hope of having their own children when they decided to go for a sixth attempt of IVF.

"We decided to give it one last shot," Santina said. "I took a pregnancy test and it was positive and I couldn't believe it.

"I didn't even phone the fertility clinic like I was meant to as I just didn't really believe it was real."

At five weeks Santina went for an ultrasound which confirmed the pregnancy.

At seven weeks they went back for another check-up - to hear the baby's heartbeat.

"I went to the toilet and there was blood, so I was terrified I was having a miscarriage," Santina said. "I was expecting the worst when I went in for the scan.

"But the sonographer suddenly just said: 'Oh, there's three.' I just started laughing. Then she was checking the heartbeats and found a fourth one. I couldn't believe it."

Santina had to be monitored throughout her pregnancy as she was high risk - due to carrying quadruplets.

She had check-ups every week.

"I was terrified each time that I would lose them," Santina said.

At 28 weeks, Santina was admitted to hospital when one of her babies had intermittent reversed blood flow of the umbilical cord artery.

She was told if one of the babies became distressed, they would all have to be delivered.

Santina managed to hold on until 31 weeks.

"I was terrified of the birth," Santina said. "The doctor came in that morning and just said we would have to deliver them as one of the babies had a dip in their heart rate."

Santina was rushed for a c-section and gave birth to her four babies.

"They were all crying so it was a big relief," Santina said.

The babies had to stay in the neonatal unit at Saddleback Memorial hospital, California, US, while they grew.

Aiden came home after five and half weeks in hospital and Aria and Sebastian followed a few days later.

Sevilla had to spend nine weeks in hospital before she could come home.

"That was really hard having Sevilla in hospital still and the others home," Santina said. "Having them all home was amazing. There personalities are starting to come out and they are doing so well.

"Aria is a little chatterbox, Sebastian is the smiliest and needest, Savilla is our easy baby and the sweetest, and Aiden has a flirty personality- he's going to be a cheeky chap."

Adrian said: "I had always thought we would have twins. I always had hope we would get pregnant. So when we found out there were three and then four babies, I was so shocked.

"It sucked not being able to go to appointments with Santina. I'm never going to forget the birth- seeing them healthy and crying was such a relief.

"It's amazing having them all home. I think it's easier than we thought it would be. We were thrown into the deep end, we have four babies and we make it work.

"I'm glad we have a family now, it can be chaotic but that is our family."