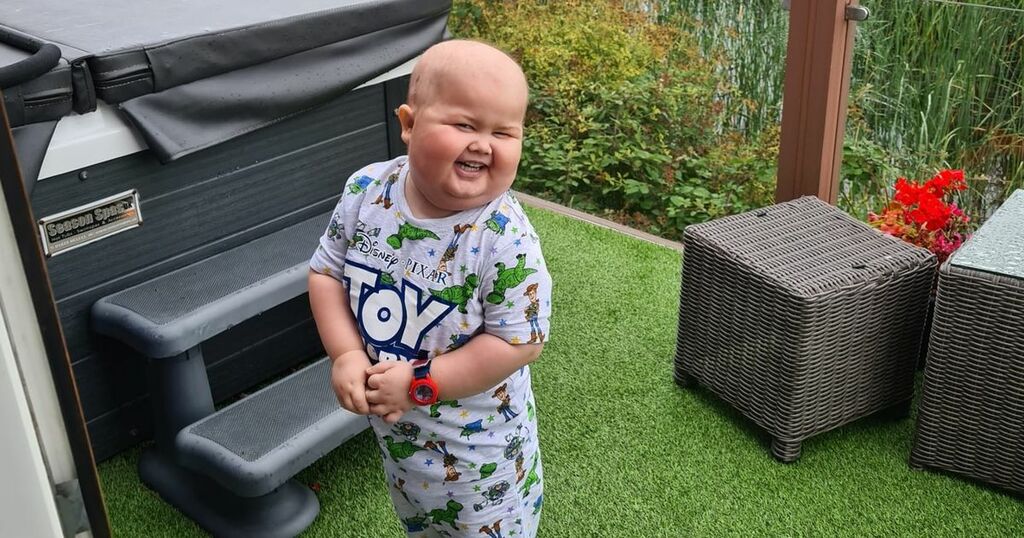 The mum of a little boy diagnosed with multiple tumours and has months left to live has spoken of his dreams as he enters his final months.

Sophie Molyneux, mum of four-year-old Zack from Eastham, has spoken of the "overwhelming" support the family have received as they cram in "as many special memories as possible."

She says that while Zack's tumours have continued to grow and "he sleeps a lot now" they are still striving to make every moment count with her little boy.

Sophie told the ECHO: "As a family we're okay, just trying to stay positive and keep hoping, but it is hard and you can see him getting worse.

"He sleeps a lot now and doesn't have the energy to do as much as he did. He'll do something and then it will take it out of him for the rest of the day."

After a GoFundMe was set up shortly after his diagnosis to help the family to spend as much quality time with Zack as possible, Sophie says they have been on some "wonderful" trips with their son, and their five other children.

She said: "One of the things he wanted to do was go to Peppa Pig world and we got to do that, he loved it.

"He went on all the baby rides and loved the water rides and he had an amazing day.

"We went there and back in one day and it was quite hard going, four hours there and four hours back but he got to meet Peppa and he absolutely loved that."

"He also went to watch his beloved Liverpool FC, watching from a VIP box as the team played Burnley."

Sophie said: "He absolutely loves Liverpool and all the players but his undoubted favourite is Bobby Firmino. He only came on near the end of that match so he was properly devastated.

"After the match finished he kept asking can we go and meet him now, I said it doesn't work like that, but loved watching the game."

Zack's symptoms have continued to deteriorate, with him becoming "much more wobbly" and unsteady on his feet and increasingly making use of a wheelchair.

The four-year-old is also losing his hair due to chemotherapy and gaining weight because of the steroids he is taking, but Sophie says his enthusiasm and sense of fun remains.

She said: "He's asked to go on holiday, to go to more Liverpool games, but it's nearly impossible to get tickets.

"He's mentioned Legoland so that's something else we're going to look into and he really loves animal experiences - his favourites are penguins so we're going to find a zoo to do that.

"It's harder now because he gets so tired and we know he's deteriorating quickly."

Sophie says she has worked hard to remain "upbeat" for her son and the rest of her kids, but she and Zack's dad Adam Topham have had some "heart-stopping" moments recently as their son's condition has worsened.

She said: "We were told that a scan in July has shown his tumours have grown and they're expecting him to get worse quite quickly and have to go into hospital soon.

"We've been told that the tumours in his brain will suddenly burst, without warning, and that will be the end.

"We've got our hearts in our mouths sometimes, it's that fear of any moment it could happen.

"On Monday he woke up in the night screaming with pain in his head, it's too much to bear to see him suffering like that.

"That moment got me, it hit home, I thought we were losing him then."

She says when the kids returned to school last week, it was also something that was "very difficult".

She said: "It was amazing and I was really shocked, we never expected anything like this.

"People have been doing raffles themselves and putting money in, donating big amounts they'd raised through raffles and in work.

"My dad's work did a raffle and made £1784 to donate and we didn't have any idea they were doing it.

"I can't tell you what an impact it's had. It's paid for anywhere we've needed to go, anything Zack's wanted to do.

"We had to give up work to spend these months with Zack and it has helped pay the bills.

"It's paid for all the clothing I've had to buy, because the steroids Zack his on has made his weight go right up.

"The money people raised, I haven't had to panic, if we've been shopping and Zack's said 'I want that' I don't need to worry, I can just get it for him.

"The support we've received has been incredible.

"There was an Amazon Wishlist for him and the delivery driver said he'd never seen so many parcels delivered to one address, he took a picture.

"It's also the support people have given us just getting in touch.

"We were the people who kept ourselves to ourselves and that's how we were before all this.

"Now, we're out and about and everybody knows him, people are always asking how he is and we get messages all the time.

"We've cried over it because it is so lovely that people are checking.

"It's nice, a comfort, to know there are people thinking of him and praying that he's going to be better.

"He has his own Facebook page and we get messages constantly. People say 'we don't want to bug you we just wanted to send best wishes or see how he is.

"I'm more than happy to receive those messages, to know there are people out there thinking of him."

A family fun day has been arranged in support of Zack's fundraiser on October 2 at the Tap in Eastham.

Sophie said: "The Tap's been a big part of my entire life, it's part of my family and Linda who owns the tap is helping organise it, there's going to be live music, bouncy castle, New Brighton radio will be there, mascots, all in support of Zack.

"The support that people have given our family, it's helping us get through it and we're just so grateful for the moments it is allowing us to have with Zack.

"We know we don't have long and time is running out, every moment we have is so precious."