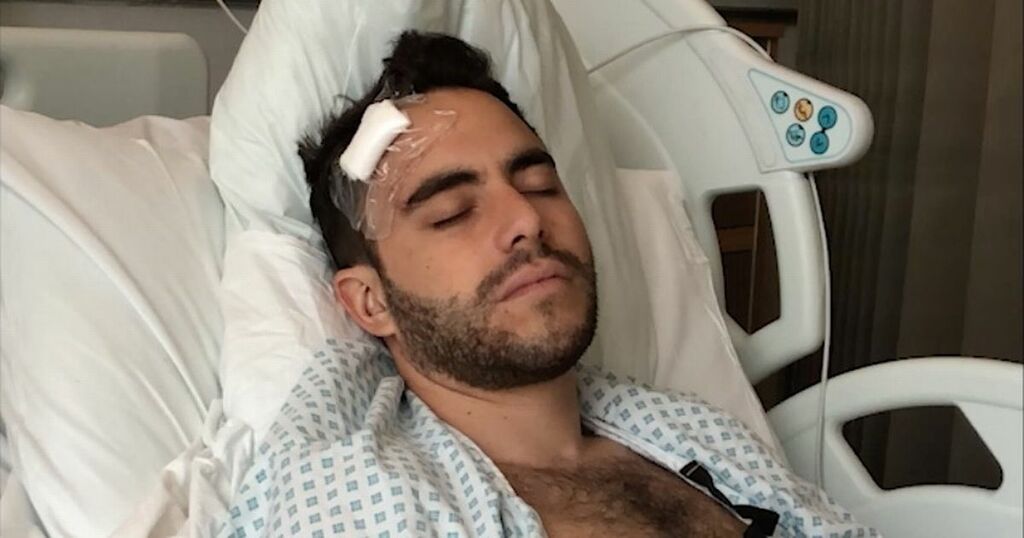 A woman feared her healthy husband had 'gone' after he collapsed and split his head open in a freak accident at home.

Andy Bord, 38, has baffled doctors who don't know what caused him to randomly fall into a seizure that almost killed him.

It is still a mystery as Andy hasn't been ill since and had never experienced anything like that before.

Wife Emma, 37, feared he was going to die and even said goodbye to him as he was airlifted to hospital.

The last thing the dad-of-three remembers is hopping in the shower one Sunday morning in June 2019.

He then woke up in a hospital bed.

The couple, from Bushey, Herts., have now hailed Andy's survival a "miracle" and are fundraising for the incredible Air Ambulance crews to raise awareness of the amazing work they do.

Emma, a personal trainer, explained: “Nobody is sure whether he blacked out and had a seizure because he banged his head, or whether his seizure began as he lost consciousness.

“Whatever happened, I heard a thud and rushed up to find him shaking, with a huge amount of blood pouring from his head.

"What the hell should I do? I didn’t want to leave him.”

Emma phoned the emergency services who told her how to help Andy - who was fitting and had a huge, bleeding gash on his head.

She said: “He became quite aggressive and was asking who I was.”

A neighbour rushed over to help take care of the couple's children - Lola, then three, and Archie, who was 18-months-old at the time.

A land ambulance crew arrived alongside the Essex and Herts Air Ambulance.

Paramedics sedated Andy in order to treat him, leaving Emma terrified he would never wake up.

She said: "For me - the words ‘coma’ make you think the worst. I was convinced he was gone."

She added: “I thought he would be brain dead and he was gone. I even said goodbye as they took him down the stairs.

"That was awful to see - ventilated and tubes everywhere.”

Andy underwent gruelling surgery on the horrific gash on his head and miraculously recovered within just days.

The couple have since gone on to have a third child, Lydia, who is one.

Andy, who works in recruitment, said: “The incident has changed my life forever. It was very scary, once I woke up, I was just grateful to be alive and all in one piece.

“On the day all I remember is a cloud coming over me and the next moment I woke up in the hospital bed with Emma looking at me crying, saying my name and then saying to the people around me ‘Will he remember my name?’

“It was a strange few months after and I took life very easy and was super tired and weak.

“Thankfully today I feel great and grateful to be alive.”

This year’s fundraising campaign shares the vital message that Every Second Counts and Every Penny Matters when saving the lives of people with a sudden life-threatening injury or medical emergency.