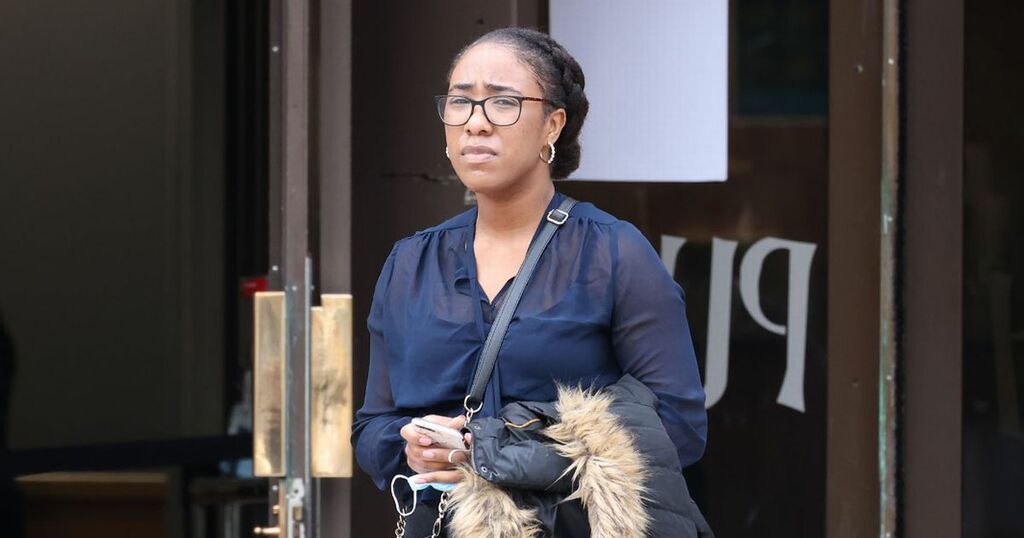 A mum-of-two who blew thousands of pounds of dirty cash on shopping sprees and meals out was today spared jail.

Jasmine Trott and her boyfriend - convicted drug dealer Richard Mademutsa - laundered the proceeds of a "heartless and faceless" cybercrime.

Mademutsa used her bank account to transfer £30,000 to crooks in Nigeria, who had hacked the email accounts of victims in a near £60,000 fraud.

The couple, both 29 and of Walton Breck Road, Anfield, then splurged cash at places including H Samuel, Marks & Spencer, Footlocker and KFC.

One victim, Marcus Quiligotti, was selling a property and instructed GD Property Solicitors in Manchester.

But his email account was hacked by the fraudsters, who sent an email to his solicitors instructing them to pay the sale proceeds of £44,665 to a joint account, supposedly in the name of him and his wife.

In reality, the details provided were for Trott's NatWest account and she received the cash on August 14, 2019.

On August 15, £6,000 was sent from her NatWest account via money transfer app Azimo to Nigeria.

Mr Hopkins said an employee at GD Property Solicitors hadn't checked the proposed account details, so the firm accepted responsibility and paid the money - £44,665, plus interest - owed to Mr Quiligotti.

Mr Quiligotti said he and his family felt as though they were being watched and he didn't know how someone got his details.

He said: "Cybercrime is a heartless and faceless crime that can be absolutely catastrophic to its victims."

The fraudsters also compromised the email account of Northgrant Ltd, a firm that supplies scaffolding across the country.

Over the next two days, four transfers were made from Trott's NatWest account to Nigeria, totalling £19,003.

When the fraud against Northgrant came to light, the bank was able to recall £11,000.

They were both charged with removing criminal property from England, relating to transferring the £30,000 to Nigeria.

However, prosecutors dropped this charge against Trott, after Mademutsa pleaded guilty.

Mademutsa was previously jailed for three and a half years for supplying Class A drugs in 2016.

Frank Dillon, defending the dad-of-two, said he no longer stood by any suggestion "he did not go into this enterprise with his eyes open" and abandoned claims that he was "intimidated, coerced or cajoled".

He said: "He's a facilitator for the proceeds of the fraud, rather than a fraudster."

Mr Dillon said Mademutsa had been self-employed but his business struggled and eventually closed due to Covid,

He said Mademutsa, who now worked at a restaurant, helped looked after his and Trott's one-year-old child and he also had a 10-year-old child, cared for by his mum.

Mr Dillon said the Probation Service believed Mademutsa had "a realistic prospect of rehabilitation" and jailing him would harm his child.

Stella Hayden, defending Trott, said she was of previous good character and jailing her would significantly harm her children.

She said Trott had shown remorse "for the act of stupidity of allowing herself to become involved in this criminality".

Ms Hayden argued Trott played a "lesser role", adding: "She maintains she didn't provide her bank details. It was an account in her name but used by both defendants."

She said Trott came to the UK from Bermuda when aged 18, completed undergraduate and masters degrees, and had worked since.

Ms Hayden said Trott had two children, aged one and six, and with her only other family in this country living in Nottingham, her ability to care for them was her "biggest concern".

Ms Hayden said: "She appreciates she only has herself to blame."

Judge Garrett Byrne said the underlying fraud was "very serious" and led to "a great deal of loss" and "stress and inconvenience".

He said: "While I accept neither of you played any direct part in that fraud itself, without your help the fraudsters would not be able to launder this money."

The judge, who commented it was a "prevalent" type of fraud, said he wasn't convinced Mademutsa did have a realistic prospect of rehabilitation.

The judge said Trott was in a different position, with previous good character and "genuine remorse".

He said: "You have a young child to look after. I'm not going to put you into prison."

The judge handed her nine months in jail, suspended for 12 months, with 60 hours of unpaid work.

Merseyside Police said it did not have a mugshot of Mademutsa because he attended a voluntary interview.

Speaking after the case, Detective Constable Tony Madden, a cybercrime investigator with Merseyside Police, said: "I would like to take this opportunity to warn anyone who may be tempted to make what they wrongly see as 'easy money'.

"If you are approached by someone who wants to use your bank account to channel ill-gotten cash, please refuse. It is not a victimless crime - ultimately that money will have been stolen or could be the proceeds from other forms of criminality causing harm in our communities.

"Allowing your account to be used in this way is an offence, and Trott and Mademutsa are now counting the cost of their mistake. Not only could it land you in prison, you will have a criminal record and it can affect your credit rating and ability to get a mortgage for years to come. It simply is not worth the risk.

"In both cases the victims were totally innocent and, unbeknown to them, had their emails compromised. If you recognise any suspicious activity on your bank account, have any concerns about a transaction or are asked to partake in such activity then please report it to the police or Action Fraud.

"I'd also urge anyone who receives payment instructions via email, even if this is a regular communication method with a known individual, please contact them by phone or other means to verify the details."