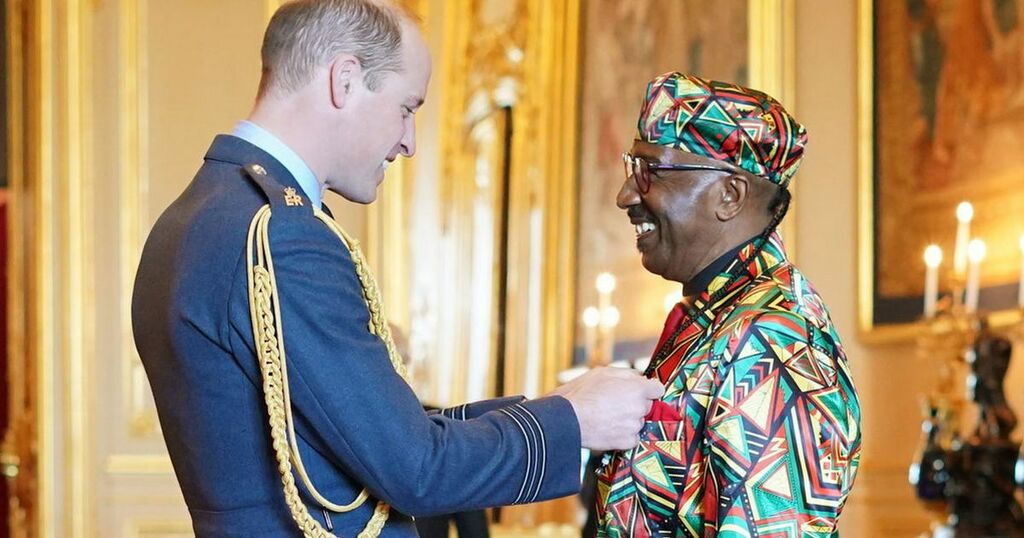 Mr Motivator flashed a beaming after receiving his Member of the Order of the British Empire medallion following a ceremony at Windsor Castle presided by Prince William, Duke of Cambridge.

The 69-year-old – whose real name is Derrick Evans – was awarded his MBE for services to health and fitness in HM The Queen’s 2020 Birthday Honours list and was clearly thrilled to finally receive the award.

The star took to social media ahead of the ceremony, sharing a photograph of himself posing outside Windsor Castle and alongside his wife, Sandra.

The fitness fanatic looked pretty chuffed before the ceremony as he posed in some crips winter sunshine outside the palace on Wednesday – and was smiling even more after he had his award.

In his post shared via Instagram before the event, Mr Motivator wrote: “On the way to get my MBE.”

While photographs from the event showed the star standing before 39-year-old Prince William – with both men grinning while the young Royal pinned the MBE to Mr Motivator’s brightly coloured jacket.

The ITV legend posed with the medal after the ceremony and gave a big smile as he posed for photographs.

The ceremony was attended by a number of other award recipients – with the official Instagram account of Prince William – the Duke and Duchess of Cambridge account – shining a spotlight on those receiving MBEs on Wednesday.

Their official post stated: “As The Duke conducts his first investiture of 2022 today, we shine a light on the inspirational individuals who have achieved great heights in their sporting fields and brought communities together through sport.

“Congratulations to all! Here are some highlights.”

Mr Motivator was included in the highlights reel – with a comment stating: “Mr. Derrick Evans, better known as "Mr Motivator", was awarded an MBE for his services to Health and Fitness.”

Mr Motivator became a household name in the UK in the 1990s when he featured on early morning TV to give fitness tips and guide viewers through gentle exercises they could complete at home.

Effectively the Joe Wicks of his day, Mr Motivator provided segments on GMTV between 1993 and 2000 that included 10 minute workouts and released countless fitness DVDs.

He featured on the 2014 BBC gymnastics inspired reality competition Tumble – but was forced to pull out of the show after taking a tumble and dislocating his knee, requiring surgery.

While in 2020, he joined the BBC’s HelathCheck UK Live TV show where he again offered home-based workout routines for viewers to join along with as the channel took steps to try and keep the UK fit during lockdown amid the still ongoing Covid-19 pandemic.