Johnny Depp is suing his ex-wife Amber Heard for defaming him in a 2018 Washington Post op-ed in which Heard suggests the actor was seriously abusive toward her – an allegation Depp contends torpedoed his career. But with a week to go in the much-watched dispute another star has emerged in Camille Vasquez, the Depp legal team’s ace in the hole.

The hashtag #camillevasquez has more than 980 million TikTok impressions. One video of her viper-quick objections to Heard’s lead attorney Elaine Bredehoft had almost 30 million views. The two-minute TikTok video of her courtroom interruptions captioned – “where did this woman get her degree?” – coincided with a 1,820% uptick in Google searches for Southwestern Law School, Vasquez’s alma mater, research by higher education website Erudera shows. (Searches for USC, Vasquez’s undergrad college, are up 127%.) Another TikTok compares Vasquez to Rachel Zane, the legal eagle Meghan Markle played on Suits.

The dramatic white suit Vasquez wore for some of the Heard testimony is probably the most talked about since Hillary Clinton accepted the Democratic party nomination for president. Shortly after Disney+ dropped the trailer on Wednesday for the Marvel TV series She-Hulk, about a lady lawyer who shares Bruce Banner’s jaded temperament, Vasquez was already inspiring memes. Outside the Fairfax county courthouse Depp supporters ambush Vasquez for hugs and selfies.

What is it about the previously unknown Vasquez, who dealt mainly with internal corporate grievances before signing on to the celebrity trial of the decade, that has so many people fawning?

Vasquez was born in San Francisco to Cuban and Colombian parents. She is currently an associate at Brown-Rudnick where she was named one of Best Lawyer magazine’s “ones to watch” last year. She had previously assisted Depp in cases against his former attorney Jake Bloom and ex-business manager Joel Mandel.

After keeping a relatively low profile for most of trial’s gavel-to-gavel coverage the 37-year-old Vasquez stepped in for lead attorney Ben Chew and into the spotlight to handle Amber Heard’s witness testimony. Vasquez, a young woman like Heard, seemed a more appropriate interrogator than the middle-aged Chew.

Shaking her head and rolling her eyes, Vasquez announced herself to the cameras by wearing down Bredehoft as she questioned her client. Vasquez made many successful objections, blocking Bredehoft from establishing facts that could favour her client. Occasionally, Vasquez buzzed in before Bredehoft had gotten her question out. After one sustained objection, Judge Penney Azcarate told Bredehoft to rephrase her question; after a pause, Bredehoft huffed, “I’m trying, I’m trying.”

Vasquez’s performance attempted to blunt the impact of Heard’s testimony while turning focus away from some of the devastating physical evidence against Depp, including threatening text messages as well as serious allegations of abuse and assault made by Heard under oath.

During her own cross-examination Vasquez attacked Heard’s credibility. Among other things: Vasquez presented photo after photo of an unscathed Heard taken in the wake of the actor’s abuse allegations and reiterated that Heard reneged on promises to give away her divorce settlement from Depp.

The responses to her in the court of public opinion recall Johnnie Cochran’s mid-90s star turn during the OJ Simpson trial. One commenter to the Vasquez objection TikTok heralded her as the “Hermione of Law”. Gushed another: “I love how she knows when Amber is playing with words, and she stops her immediately.”

Vasquez’s interactions with Depp have led to online rumours of a romantic entanglement between the two – an idea that had Vasquez laughing when one paparazzo suggested it outside the courthouse. (Vasquez is said to be involved with a British realtor.) More likely, the touches and hugs shared between Depp and Vasquez are – as body language experts have speculated – engineered to make Depp appear softer.

Her star turn is further evidence of the strange way this defamation trial has become a made-for-TV blockbuster. It’s one thing to have a high-powered lawyer in court, quite another to have one with her own set of fans. 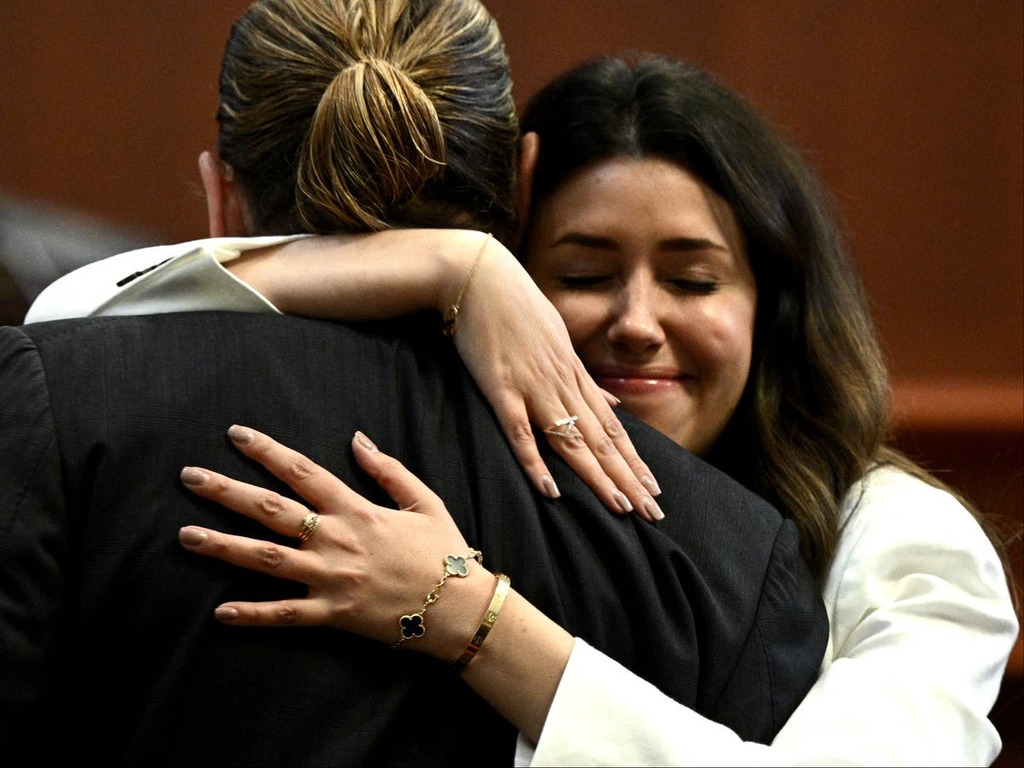 The Independent UK
One subscription that gives you access to news from hundreds of sites
Fan pages, video tributes, and romance rumors: How Johnny Depp’s fandom turned its focus to his lawyer

Cross-examination has been described as ‘often harsh’