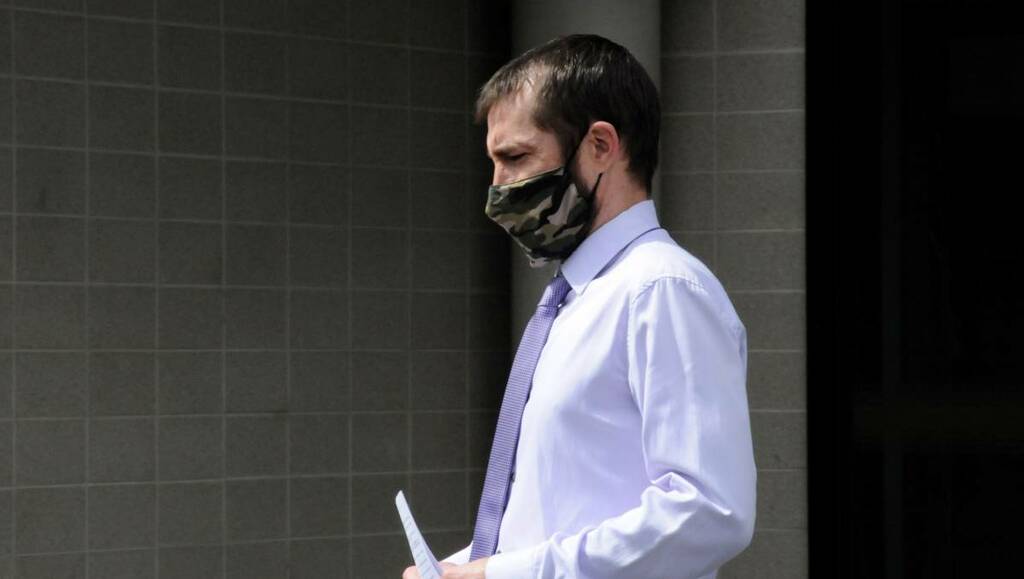 A Canberra bricklayer has avoided jail time after glassing a man who "got a bit mouthy" and threatened to rape a member of his family.

Magistrate Beth Campbell described the victim's remarks as "disturbing" when she fined Benjamin Thomas Kenworthy on Monday and placed him on a good behaviour order.

Kenworthy, a 34-year-old single father from Conder, had previously pleaded guilty to a charge of assault occasioning actual bodily harm.

On Monday, the ACT Magistrates Court heard he had a confrontation with the victim on a balcony at the Tuggeranong Vikings Club in August 2020.

A statement of facts says Kenworthy "got in [the victim's] face".

"Their faces were so close they were almost touching," the document says.

"[Kenworthy] then used a glass bottle that was in his right hand and swung it straight into the face of [the victim], causing immediate pain and blood to spill from [the victim]'s nose and mouth".

When police arrived a short time later, Kenworthy told them he had been "a bit aggressive" because the victim "got a bit mouthy"

"I did not try to hurt him properly," Kenworthy told officers.

Kenworthy's lawyer, Jacob Robertson of JDR Law, said the victim and his partner had "made disparaging remarks" about one of his client's female family members a few minutes prior to the glassing.

He told the court the man spoke of wanting to rape this person.

"Those comments, of such a vulgar nature, are likely to receive a response from the defendant," Mr Robertson told the court.

He said Kenworthy, who had been drinking from a glass bottle of Jack Daniels, had merely intended to throw its contents on the victim.

Kenworthy instead recklessly, rather than intentionally, hit the victim with the bottle.

"This offence can be characterised as impulsive, and I would say there's a high degree of provocation given what was said to Mr Kenworthy," the lawyer said.

Mr Robertson added the 34-year-old offender was "a dedicated, devoted father", who did not have a history of aggression or violence.

He submitted that Kenworthy should not be required to serve time behind bars.

A prosecutor argued the threshold for a sentence of imprisonment had been crossed, saying Kenworthy had struck "an inherently vulnerable area of the body" with the bottle while on a good behaviour order for previous offending.

She accepted, however, that Kenworthy had acted in response to "disparaging or provocative remarks" and that he had not intended to use glass as a weapon.

In sentencing, Ms Campbell said she had come into the courtroom thinking nothing other than a sentence of imprisonment would be appropriate.

But she said she had changed her mind after hearing about the "disturbing, provoking and clearly inappropriate" comments made by the victim, and the fact Kenworthy had not deliberately glassed him.

Ms Campbell said Kenworthy "should not have acted the way he did", but she described the incident as "not your typical example of glassing".

This was in part because the offender had been the beneficiary of some good luck, with the victim having only sustained a small cut to the nose.

"I cannot, and should not, determine that nothing other than a sentence of imprisonment is appropriate," she said.

The magistrate ultimately fined Kenworthy $1500 and placed him on a 12-month good behaviour order, with a requirement he forfeit a further $1500 in the event of a breach.