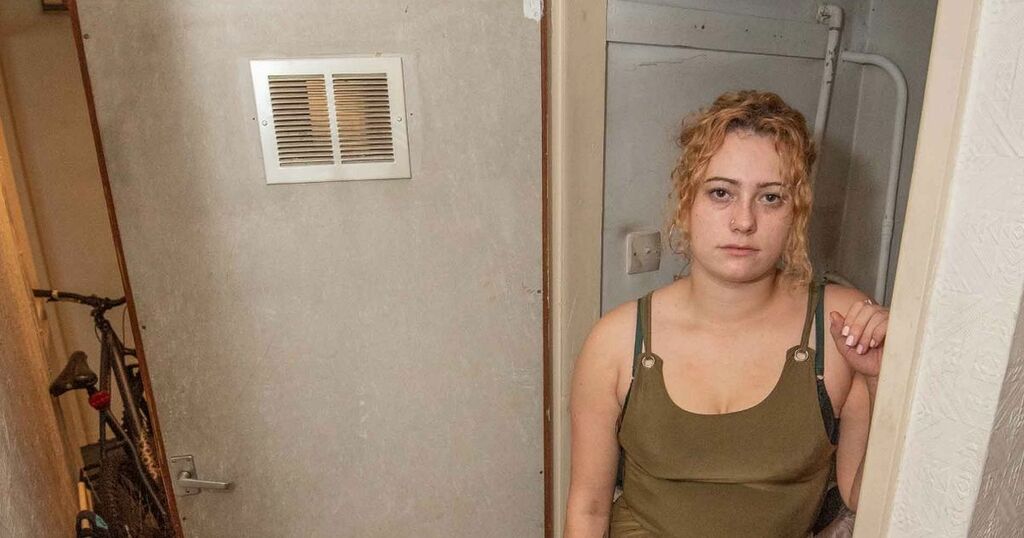 A single-mum claims her mouldy flat is making her children ill and one now suffers from a 'smoker's cough'.

Melanie Knowles-Morgan says her family have lived under "unsuitable conditions" since moving into the Cartland Road council property nine months ago.

The 21-year-old mum-of-two of Kings Heath, Birmingham said her youngest has developed a "smoker's cough" from the black mould and damp inside.

She told BirminghamLive : "My children are coughing all the time and I know it's because of the mould.

"My youngest's is particularly bad. It's like a smoker's cough."

There is also currently no heating at the two-bedroom flat, confirmed by the city council, who have arranged to rip out old pipes and radiators to fix the issue over three days of repairs.

"I have been without hot water and had no heating for weeks despite having children aged eight-months and two-years-old," said an emotional Melanie, who says her mental health is at an all-time low.

"The council told me to move all of my furniture out of the way during
these three days, whilst the repairs are being done.

"But I don't have anywhere I can go. I don't have close family and I'm not going to take my ill children to the park for nine hours each day.

"One of my children has autism and cannot be here whilst they are drilling holes and making loud noises as it will really frighten him."

The full-time mum says she doesn't have enough money to stay in a hotel.

She said Birmingham City Council asked her to move appliances into a cupboard full of black mould and damp, as the current fridge space is the only suitable location for a new boiler.

"I cannot do this," she said, "my children are already constantly coughing.

"When they visited, the repair team told me my best bet is to move out of the property as I also have asbestos. This is what I want to happen, we need to be upgraded."

Melanie added she is willing to fight the authority in court if they fail to find her new suitable accommodation, claiming negligence.

"As well as all this, I constantly have bugs, slugs and ants in my property due to the conditions.

"My bathroom is also really old. The water pressure is really bad and the bath has a crack which cut me before.

"The back garden is unsafe and there are rats and no fence."

Melanie added that she has contacted her local MP over her plight, but
is yet to hear back.

Birmingham City Council has apologised for the "distress caused by ongoing repairs" at the property and said the reported mould had "now been treated", which Melanie refutes.

She says some of it was painted over when she first moved in but that no work has been done since.

A council spokesman said: "The reported mould has now been treated and a further inspection is scheduled to ensure it has all been treated.

"The property has been asbestos surveyed by specialists. No asbestos was found apart from on the door of the airing cupboard which will be left as it is no danger to the tenant.

"In relation to the heating, a new boiler and radiators are being installed which will take place next week.

"An earlier appointment was offered to the tenant but they declined it."