Motorcyclist: 'I went under her car and was spat out the back' 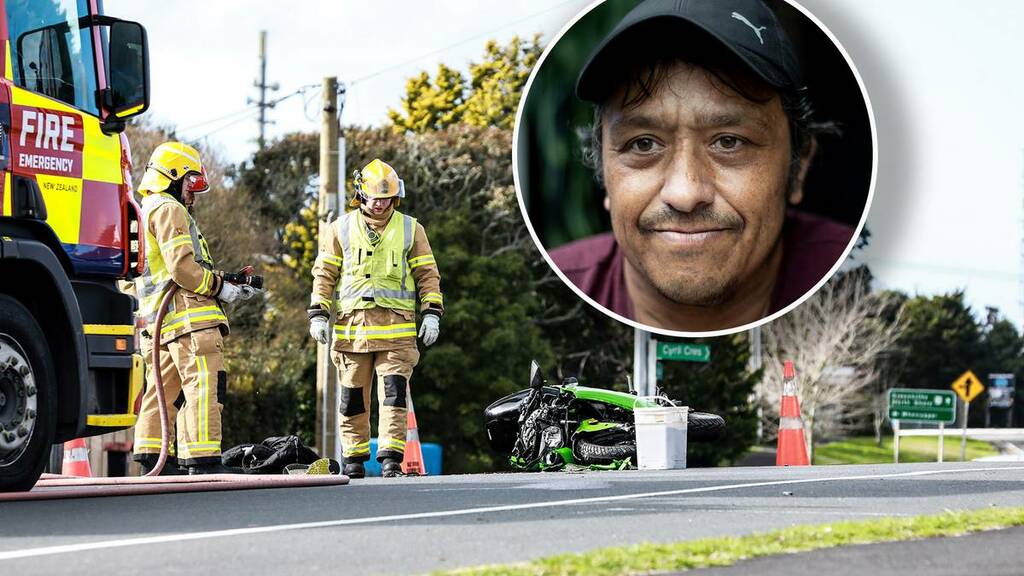 Motorcyclist Dave Gaffar is lucky to be alive.

The 47-year-old was riding along Hobsonville Rd in West Harbour when he was hit by an elderly motorist who was leaving church.

"When she pulled out of the driveway she hit me ... and I went under the front of her car and was spat out the back. She went completely over me and my bike, and she only stopped when she drove into the fence on the other side of the road."

The experienced rider doesn't remember the crash, nor much of what happened in the following days but doctors told his family they didn't know if he'd survive the horrific ordeal.

"After a week or so when they were able to take me off the ventilators, they were shocked ... I wasn't supposed to survive this accident."

Gaffar spent 23 days in hospital before being released – but his injuries are so extensive it will be months before he can even get out of a wheelchair.

"I've got 12 broken ribs in my back, broken pelvis, I've lost one kidney, I've lost my spleen, they are still a bit concerned about my liver ... they reckon I'll pretty much be wheelchair bound for up to six months."

His vision is blurred in one eye and he now has a metal plate in his back holding his ribs together and needs help with basic needs like bathing and going to the bathroom.

"The pain I've had to go through is amazing."

Gaffar was on his way to work on July 30 when the accident happened not far from his home. One of the people who helped him was a nurse on her way to work – and who would go on to look after him in hospital.

"She had to ring in and say she was going to be late because she was at a crash scene. She filled me in on how I was at the time but she was a few cars back from the accident."

He says the first thing he really remembers after the crash was a nurse trying to wake him after surgery.

"I vaguely recall someone saying 'you've been in an accident and you are in hospital'. For that first week I was hallucinating, I was on pretty strong drugs.

"They (doctors) couldn't tell my family if I would make it or not."

The road to recovery has been further hindered by the fact Gaffar's rental lease had finished and the rental he thought he had secured was given to someone else when he failed to turn up and sign papers – the agent was unaware that he was unconscious in hospital.

He's now sharing a room with his two sons Alex and Kingston at his sister's place while they try and find somewhere to live with all of his belongings in storage.

"Me and my two boys are bunked up in a single room with no place to live."

He said he's grateful to his sons who have helped him since he's come home from hospital.

"My kids almost didn't have me coming home that night."

Gaffar is keen to hear from anyone who saw the actual collision.

"I can't remember the day. I'm just wanting to tie some sort of memory of the day, to put pieces together."

He also wants to thank those who were there on the day and helped save his life, and those who worked so tirelessly in hospital.

"There were a lot of people who worked on me, all the emergency crew that helped me survive and all the public that came to my aid ... thanks to all of them because without them I wouldn't be here. The work that the doctors and nurses did – they were amazing."

Gaffar is upset at no longer being about to take his kids to sport or coach his youngest son's touch team. He also remains in pain, especially at night as he's unable to roll over and is not sure when, or if, he'll be able to work again.

But, he's trying to focus on the future.

"There's no point being angry, it happened," he said. "I just have to deal with it, it's just hard."

A police spokesman said the investigation into the crash is ongoing,

"While this process is still underway, no decisions have been made at this point around any charges being laid."