The forecasted rain stayed away for the crucial 45-minute FP3 session, though only Joan Mir’s Suzuki replacement Danilo Petrucci had made an improvement on the combined order after the first 25 minutes of running.

VR46 Ducati’s Luca Marini led the way in the early stages on the individual FP3 timesheet with a 1m31.018s, which stood for some time as the field focused on long running.

Jack Miller on the factory Ducati got closer to Johann Zarco’s 1m30.2s from FP2 with a 1m30.898s, but it only moved him up to top spot in FP3 and didn’t alter the combined standings.

With 12 minutes of the session remaining, championship leader Fabio Quartararo bested Miller with a 1m30.481s – before a follow-up effort of 1m30.310s set on a medium rear tyre proved to be the first significant time on the combined timesheet as it pushed him up to third.

Zarco’s time was finally deposed with just over two minutes remaining when his Pramac team-mate Martin – who fell off his GP22 at the last corner early on - shot to the top of the order with a 1m30.205s.

Miller produced a 1m30.217s at the end of the session to challenge Martin’s lap, but came up 0.012s short before crashing down at Turn 3 on his final lap.

Zarco held onto third on the combined order with his Friday best, though was seventh in the FP3 session, with fourth-placed Francesco Bagnaia on the sister factory Ducati - who was 17th in FP3 - also getting into Q2 by virtue of his Friday best.

Yamaha’s Quartararo completed the top five on the combined order with his 1m30.310s, with KTM’s Brad Binder safely sailing through to Q2 with the championship leader.

The final Q2 spots have gone to Suzuki’s Alex Rins, the Gresini Ducati of outside title bet Enea Bastianini and VR46 duo Marco Bezzecchi and Marini.

The late improvement for Binder proved costly for Marc Marquez, who made a mistake at the final corner on what turned out to be his last flying lap.

Having been on course for a big jump up the top 10, Marquez couldn’t improve on his 1m30.523s from Friday and was unable to complete a final lap – leaving him 0.007s outside of the Q2 cut-off in 11th.

It was another disastrous sessions for the factory Aprilia riders, as title challenger Aleix Espargaro and team-mate Maverick Vinales struggled for grip on the RS-GP.

Espargaro was able to improve on his Friday best in FP3, but it was only good enough for 14th overall and he faces Q1 along with Vinales, Marquez and KTM’s Miguel Oliveira.

After hurting the ankle he badly broke in 2018 on Friday, RNF Racing’s Cal Crutchlow did ride in FP3 and was 15th on the combined order.

Tech3 KTM rider Raul Fernandez didn’t take part in FP3 due to a stomach illness, with the Spaniard’s continued participation to be decided later on Saturday. 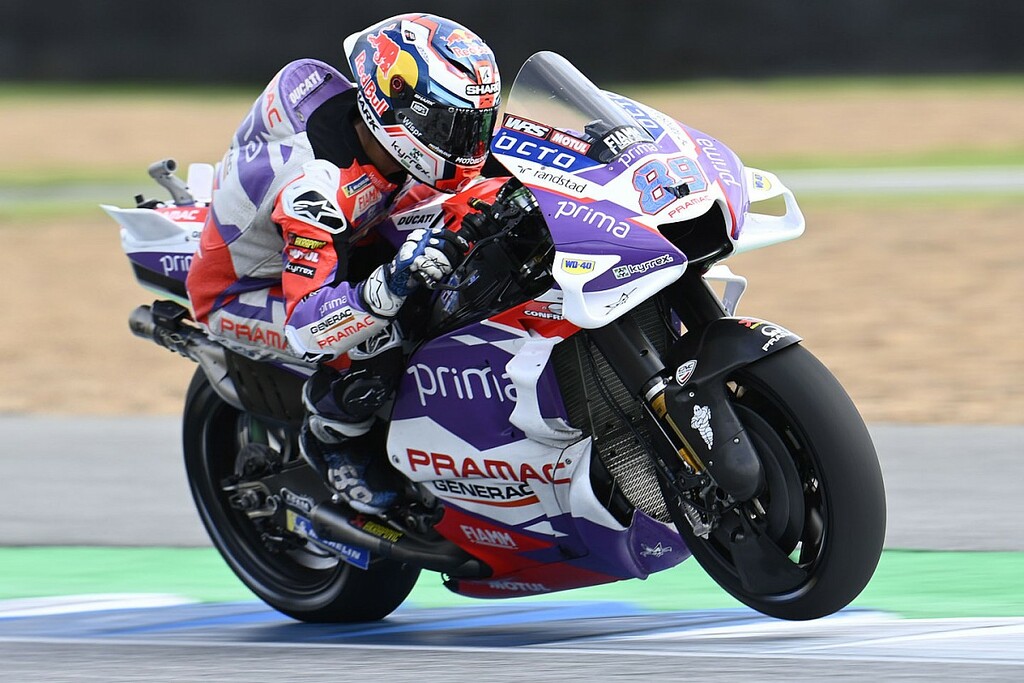 Motorsport
From analysis to the latest developments in health, read the most diverse news in one place.
MotoGP Thailand GP: Zarco leads Bagnaia in FP2 as Ducati lock out top four

Honda’s Marc Marquez topped a tight opening practice for the MotoGP Thailand Grand Prix despite suffering a crash in the early part of the session.

Marco Bezzecchi snatched a maiden MotoGP pole for himself and Valentino Rossi’s team after beating Jorge Martin by 0.021s in a thrilling Thailand Grand Prix qualifying.

Marco Bezzecchi snatched a maiden MotoGP pole for himself and Valentino Rossi’s team after beating Jorge Martin by 0.021 seconds in a thrilling Thailand Grand Prix qualifying.

Autosport
One place to find news on any topic, from hundreds of sites.
Thailand MotoGP: Zarco leads Ducati 1-2-3-4 in second practice