MotoGP returns to Buriram for the first time since 2019 as the easing of worldwide restrictions related to the COVID-19 pandemic have allowed the series to embark on its Asia-Pacific jaunt in 2022.

Having taken pole in a wet qualifying last week in Japan, Marquez – who was fourth in the dry race – ended FP1 in Thailand fastest of all by 0.032 seconds after a frantic end to the session.

With a forecast threatening rain all weekend, the dry FP1 session in Thailand on Friday morning descended into a mini qualifying in the final five minutes as the field made a potentially critical bid to secure a place directly in the Q2 qualifying session.

Reigning world champion Fabio Quartararo – who narrowly missed victory in Thailand in 2019 in a battle with Marquez – set the early pace on his factory Yamaha with a 1m33.801s.

As he posted this lap, Honda’s Marquez found himself on the deck at the Turn 3 hairpin when he ran out wide onto a damp run-off area and tucked the front.

No harm came from the spill, but Marquez wouldn’t see the top of the timesheets until the final two minutes when he fired in a 1m30.523s on his soft tyre time attack lap.

Zarco led the session with a 1m31.504s prior to the late qualifying sim, with Gresini Ducati’s Fabio Di Giannantonio deposing the Frenchman with four minutes remaining.

The Gresini rookie’s 1m31.357s only kept him top of the pile for a few seconds, as Pramac’s Jorge Martin streaked clear with a 1m31.012s.

This would fall when Quartararo blitzed the last sector on his factory Yamaha to dip under the 1m31s for the first time this weekend with a 1m30.644s to better the existing race lap record.

Japan race winner Jack Miller completed the top three behind Marquez and championship leader Quartararo, with VR46 Ducati rider Luca Marini carrying on his strong from at Motegi to finish fourth in FP1 in Thailand.

Alex Rins rounded out the top five for Suzuki as Francesco Bagnaia – who is now 18 points behind Quartararo after a crash last week in Japan – leaped up to sixth at the end on his factory Ducati having found himself down in 13th.

KTM’s Miguel Oliveira was seventh despite a crash early on at the final corner, with Yamaha’s Franco Morbidelli, Gresini’s Enea Bastianini and Martin securing the final provisional Q2 places.

RNF Racing Yamaha rider Cal Crutchlow was denied a place in the top 10 by just 0.039s from Zarco and Di Giannantonio, with Honda’s Pol Espargaro and Brad Binder (KTM) completing the top 15.

Aprilia’s Aleix Espargaro will be hoping the predicted rainfall expected to hit this afternoon stays away after slipping to 16th in FP1 – albeit just 0.564s off the pace.

The Spaniard, third in the championship after scoring no points at Motegi and slipping to 25 points behind Quartararo, headed his team-mate Maverick Vinales and the VR46 Ducati of Marco Bezzecchi.

Double MotoGP race winner Danilo Petrucci – who retired at the end of 2021- made a welcome return to the series at Suzuki in place of the injured Joan Mir on Friday morning at Buriram.

Having arrived on Wednesday from finishing second in the MotoAmerica Championship last weekend, Petrucci ended FP1 down in 22nd with a 1m32.706s ahead of RNF’s Darryn Binder and Takaaki Nakagami’s injury relief at LCR Honda Tetsuta Nagashima. 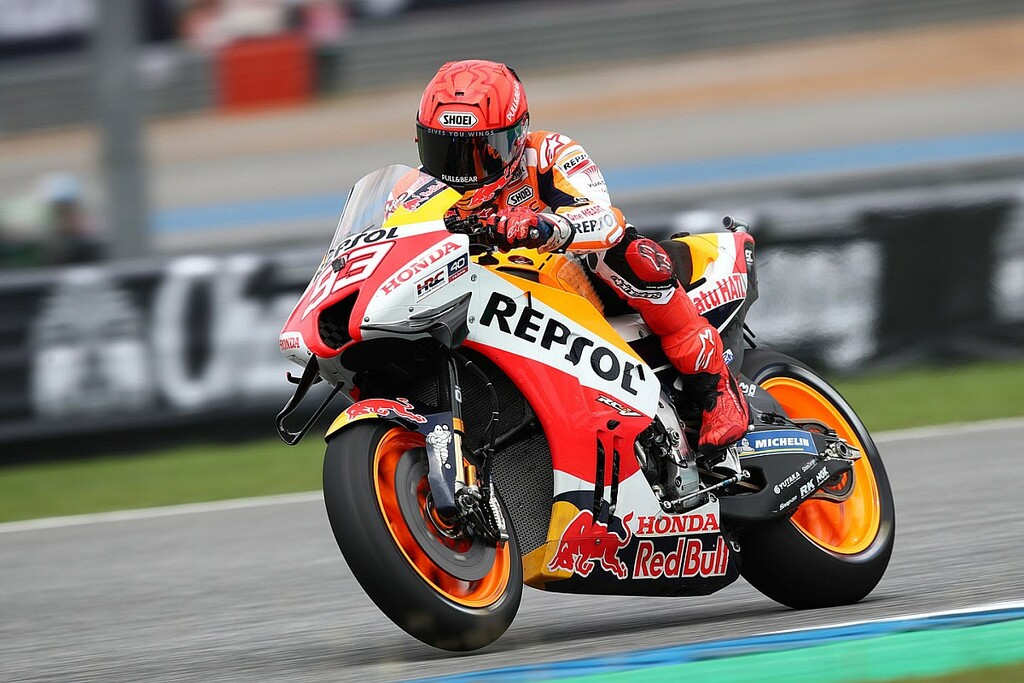 Thailand MotoGP: Marquez tops tight FP1 despite crash
Honda’s Marc Marquez topped a tight opening practice for the MotoGP Thailand Grand Prix despite suffering a crash in the early part of the session.

Motorsport
From analysis to the latest developments in health, read the most diverse news in one place.
MotoGP Thailand GP: Zarco leads Bagnaia in FP2 as Ducati lock out top four

Pramac’s Jorge Martin topped third practice for the MotoGP Thailand Grand Prix despite a crash as Honda’s Marc Marquez failed to get into qualifying Q2 directly.

Marco Bezzecchi snatched a maiden MotoGP pole for himself and Valentino Rossi’s team after beating Jorge Martin by 0.021 seconds in a thrilling Thailand Grand Prix qualifying.

Marco Bezzecchi snatched a maiden MotoGP pole for himself and Valentino Rossi’s team after beating Jorge Martin by 0.021s in a thrilling Thailand Grand Prix qualifying.

Motorsport
One place to find news on any topic, from hundreds of sites.
Thailand MotoGP: Zarco leads Ducati 1-2-3-4 in second practice