Morrison faces a key choice: stand up for vaccination or push for extremist votes 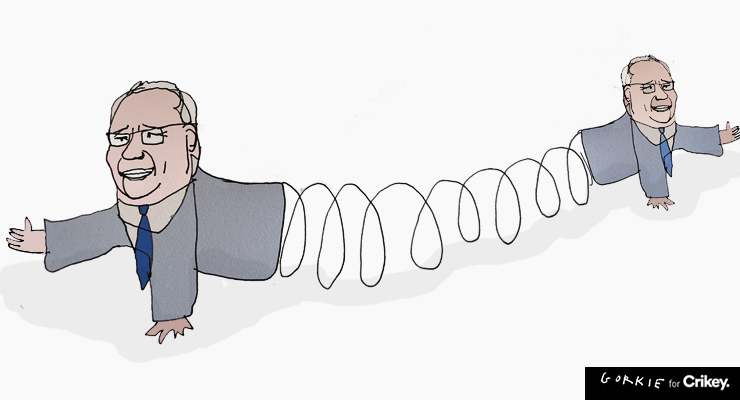 Scott Morrison is normally averse to leadership of any kind, but his reluctance to offer leadership of on businesses mandating vaccinations, or vaccine passports, has been especially stark.

What’s made it starker is that the prime minister is relying on a lockdown-driven uptake in vaccination to turn his political fortunes around, encouraging voters to forget about how badly he bungled the vaccine rollout and quarantine. Despite that, he has preferred to leave it to business to pursue the issue of vaccination mandates in a fragmented, costly fashion, and leave it to the states to deal with vaccine passports and privileges for the vaccinated.

That’s because there’s a deep tension within the Liberal Party between pro-business figures who want to reopen as fast as possible, no matter what the human cost — the types who dominate the leadership of the NSW government — and right-wing extremists who see the entire pandemic as just another culture war for whom vaccine mandates and passports are another form of socialist compulsion.

The latter lurk on the backbench and in the fringes of the party at state and federal level — but for Morrison, who is teetering on minority government, they can’t be ignored.

As David Hardaker showed yesterday, there’s a large intersection between these anti-vax groups (though they insist they not be described as anti-vax) and fundamentalist Christian groups, who for a variety of reasons — tenuous links between vaccines and abortion, incoherent arguments about coercion — either oppose vaccination outright or adopt the same coded opposition as the George Christensens and Craig Kellys of the world.

In that context it’s worth noting that Morrison’s close friend, mentor and spiritual guide Brian Houston — currently facing charges in relation to allegedly concealing evidence of his late father Brian Houston’s child abuse crimes — has pandered to fundamentalist anti-vaxxers. He has described vaccination as “a personal choice” after a high-profile anti-vaxxer congregant in the US died from COVID.

Phraseology like “personal choice” is virtue-signal to the freedom obsessives and conspiracy theorists who oppose any kind of vaccination compulsion. Houston’s Hillsong operation is, above all, a business which relies on not alienating its customer base, particularly in the US where there’s plenty of competition for evangelical cults.

Morrison’s problem isn’t merely that he has a backbencher he prefers to keep onside until the election. He was able to secure a surprise victory in 2019 partly off the back of a surge in right-wing support in Queensland that ate deep into Labor’s vote and delivered extensive second preference votes to the LNP. As an experienced walker of a narrow path to electoral victory, Morrison desperately wants to keep his Queensland vote as high as possible, even if it won’t match its 2019 height.

And problematically, Clive Palmer — who spent tens of millions demonising Bill Shorten on Morrison’s behalf in 2019 — is this time campaigning not just against vaccination mandates but against vaccines.

The government’s chances of keeping the fall in the LNP vote to a minimum are small indeed if Palmer decides to go hard against Morrison on vaccines. That’s why Morrison won’t say boo on mandates or passports — but leaves it to business and the states to cop the blame. He wants the right-wing extremists who went for Pauline Hanson last time, and the disgruntled voters who paid attention to Palmer’s advertising, to second-preference the LNP again — or at least not be turned off the idea by an advertising blitz about freedom.

But every moment Morrison drags his feet on encouraging vaccination is a moment lost in the race to reopen Australia. Every moment the claims of anti-vaxxers, conspiracy theorists, extremists and the Kellys and Palmers go unchecked by the national leader is a backward step. If we accept at least 10% of the population will be hard-core refuseniks, there are probably about 4-5% who are in play on getting a shot — and who could make the difference between Australia merely doing OK on a national vaccination rate or hitting 80%.

Hitting that mark means a lot in terms of reopening — and in terms of lives lost and illness suffered.

So Morrison has a moral choice. He can either continue to softly pander to the anti-vax fringe in the hope of securing their votes, or he can stand up for health and the economy by displaying some leadership on mandates and passports.

NSW charging ahead with its reopening plan based on privileges for the vaccinated — many say recklessly fast — will only increase the tension for Morrison. But don’t hold your breath waiting for the prime minister to do the right thing. It’s all about staying in power. Not about using power wisely.