As Australians grapple with rising prices, the new treasurer, Jim Chalmers, is banking on a surge in capital spending to boost productivity in the economy and ease a “cost of living crisis”. His comments come after news that standard power prices would go up by as much as 20% for some customers – but that’s not the only thing hurting household budgets. “Electricity prices are the pointy end of the cost of living crisis,” Chalmers said. Economic data from the Australian Bureau of Statistics found 38% of businesses planned to lift prices in the next three months, with almost all of them citing rising costs of goods and services, and just over 75% reporting rising energy costs. Meanwhile, the foreign minister, Penny Wong, has used her trip to Fiji to suggest Pacific nations think about the long term consequences of China’s proposed economic and security deal, saying Australia won’t “impose unsustainable financial burdens”.

Texas law enforcement agencies are facing escalating criticism over their response to the mass shooting at Robb elementary school in Uvalde, after it emerged the gunman remained locked inside a classroom for up to an hour while large numbers of police were amassed outside the room without taking any action. Texas authorities confirmed “numerous” police officers decided to wait for a specialist tactical unit to arrive before confronting and killing the shooter in the classroom. The shooter committed all his 21 murders inside that room – including 19 children and two teachers.

Australian police have renewed their plea for a proper national firearms database in the wake of the Texas school shooting, a reform that successive Australian governments have struggled to implement since it was first recommended 30 years ago. Australia’s gun control laws, introduced by the Howard government after the Port Arthur massacre, have been widely celebrated for their effectiveness at reducing gun deaths, massacres, and suicides using firearms. But significant gaps remain in Australia’s regulation of firearms, including the lack of a genuine national firearms database. Each Australian jurisdiction maintains its own register of firearms, creating inconsistent data holdings and weapons classifications.

A Palestinian investigation into the shooting death of Al Jazeera journalist Shireen Abu Akleh has concluded that she was deliberately killed by Israeli forces, the Palestinian Authority has announced. Israel is likely to reject the findings as biased and unfounded. The Palestinian attorney general, Akram Al Khateeb, announced the results of the investigation at a news conference in the West Bank city of Ramallah. “The only shooting was by the occupation forces, with the aim of killing,” he said.

Any new coalmines in Australia’s Galilee Basin, including Adani’s Carmichael mine, will not be economically viable in the long run under even the most generous assumptions about the future of the fossil fuel, according to an analysis by German academics.

The Law Society of New South Wales has called on the premier, Dominic Perrottet, to “urgently” review thousands of Covid fines issued to the state’s most vulnerable, warning many were invalid, unfair, and have caused the disadvantaged to amass “debt they are unable to pay”.

A Melbourne woman with cerebral palsy is fighting to stay in her home just a year after moving in because the agency running the national disability insurance scheme has decided her funding is no longer “value for money”.

Public hospitals in Australia are postponing non-urgent screening tests and are recommending doctors consider alternative imaging options as the health system grapples with a global shortage of medical imaging dyes, widely used in diagnostic tests such as CT scans.

Officials in Ukraine have admitted that Russia has the “upper hand” in fighting in the country’s east, as Ukrainian forces fell back from some of their positions in the Donbas region.

The US secretary of state, Antony Blinken, has called for a vigorous defence of the existing global order, but stressed that Joe Biden’s administration did not seek a “cold war” with China. The Biden administration’s policy towards the world’s most populous country contained three words: invest, align and compete.

The actor Kevin Spacey is facing four counts of sexual assault against three men, the Crown Prosecution Service has said. The CPS said it had also authorised a charge against the 62-year-old of causing a person to engage in penetrative sexual activity without consent.

Ray Liotta, star of Goodfellas and Field of Dreams, has died at the age of 67. According to his representative who confirmed the news, the actor died in his sleep in the Dominican Republic while shooting his latest film.

From ancient Egyptian cubits to fitness tracker apps, humankind has long been seeking ever more ways to measure the world – and ourselves. But what is this doing to us? “Measures, then, are both meaningful and arbitrary; iron guides in our lives that are malleable if we want them to be,” writes James Vincent.

What is Sydney without sunshine? It’s full of personal trainers who can’t train, dog walkers who can’t walk, tradies who can’t build, gardeners unable to garden and swimmers who don’t swim for fear of developing pink eye from the befouled waterways. As of 24 May, Sydney had only experienced 48 days this year without rain. Melbourne, on the other hand, had experienced 128.

In Paul Dalla Rosa’s An Exciting and Vivid Inner Life, young people try – and fail – to live gorgeously in the Melbourne writer’s debut collection, which is bleak, acute and stealthily tender.

The comedian and showrunner Josh Thomas’s new podcast, How To Be Gay, marries interviews with personal stories. But he saved his “last secret” for us.

The dust is beginning to settle on an election where Australians overwhelmingly voted for the end of politics as usual. But during the election campaign, voters were continually bombarded with gaffes, gotcha questions and empty political theatre. In this episode of Full Story, Gabrielle Jackson talks to Lenore Taylor and Mike Ticher about the disconnect between the media, the major parties and voters who are clamouring for a more productive and representative political debate.

Full Story is Guardian Australia’s daily news podcast. Subscribe for free on Apple Podcasts, Spotify or any other podcasting app.

More than 200 school students will perform at Suncorp Stadium Friday night for NRL’s Indigenous round. It’s the result of a partnership between the Brisbane Broncos and the Bangarra Dance Theatre aiming to empower Indigenous youth.

Scott Morrison instructed the Australian Border Force to publicise an interception of a suspected asylum seeker boat on election day, the ABC reveals. The Age reports that women are giving birth in emergency departments or discharging themselves early due to a shortage of midwives. And NSW Health is warning of a potential legionnaires’ outbreak in Sydney’s CBD in the Daily Telegraph.

And if you’ve read this far …

Top Gun for hire: why Hollywood is the US military’s best wingman.

If you would like to receive the Guardian Australia morning mail to your email inbox every weekday, sign up here.

If you have any questions or comments about any of our newsletters please email newsletters@theguardian.com.

Every Saturday at 6am, enjoy early access to the best journalism planned for the weekend in one elegant app, plus a curated selection of the week’s news and analysis from Australia and the world. 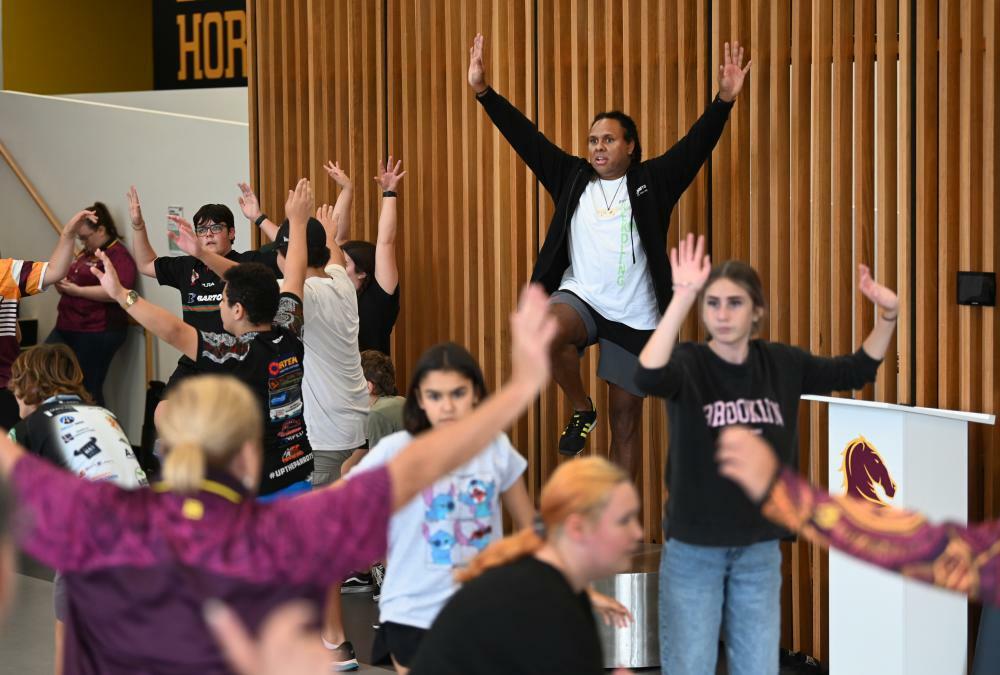 Snakes, goannas and stingrays: the kids dancing into NRL’s Indigenous round
Partnerships such as that between the Brisbane Broncos and the Bangarra Dance Theatre are aiming to empower Indigenous youth through…

The Guardian - AU
One subscription that gives you access to news from hundreds of sites
The Loop: Calls for gun control after US mass shooting, and more Aussies eligible for fourth COVID-19 vaccine dose

Thursday: ‘You are all doing nothing,’ Texas governor told after worst attack on a school since Sandy Hook. Plus: what’s…