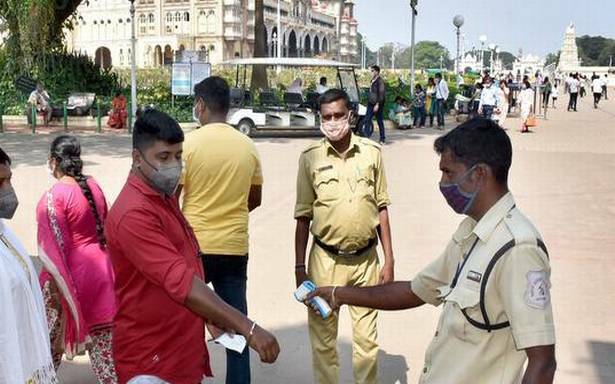 India recorded 2,41,003 new COVID-19 cases on January 12, the highest single-day increase in the ongoing wave. The infections increased by more than 165% compared with the case count a week ago.

Eminent rocket scientist S. Somanath has been appointed as the Chairman of the Indian Space Research Organisation (ISRO) and the Space Secretary.

BJP leaders in a huddle amid speculation on Ayodhya ticket

The under-construction Ram temple in Ayodhya is all set to occupy the central place in the Bharatiya Janata Party’s (BJP) campaign for Assembly elections in Uttar Pradesh, with speculation gaining ground that Chief Minister Yogi Adityanath is likely to contest the polls from that seat.

Home Minister Amit Shah is expected to seal the final agreement to end the dispute in six areas of the Assam-Meghalaya boundary ahead of Meghalaya’s 50th Statehood Day celebration on January 21.

Ratings by Broadcast Audience Research Council (BARC) for the news channels will resume, after the organisation revised its procedures and protocols.

Congress to blame for blockade of PM’s cavalcade in Punjab: Tripura CM

Tripura Chief Minister Biplab Kumar Deb on Wednesday charged the Congress with orchestrating the plot for the blockade of Prime Minister Narendra Modi’s cavalcade in Punjab on January 5.

A day after he quit the Bharatiya Janata Party (BJP) government in Uttar Pradesh, rebel Other Backward Class (OBC) leader Swami Prasad Maurya was served an arrest warrant by a local court in Sultanpur for a 2004 speech in which he had allegedly asked Dalits and OBCs to not worship some Hindu gods.

The number of new coronavirus infections in the last week jumped by about 55%, although the number of deaths remained stable, the World Health Organization said in its latest pandemic report.

The two new franchises in the Indian Premier League (IPL) have been asked to submit their pre-auction signings by Jan. 22.

Stating that the Trinamool Congress strategy and purpose in Goa were hard to understand, All-India Congress Committee (AICC) in-charge for Goa Dinesh Gundu Rao on Wednesday said speculation about alliance between the Congress and the Mamata Banerjee-led Trinamool in the coastal State was ‘unfounded’.

Jasprit Bumrah rediscovered his mojo, Keegan Petersen conjured an innings of sublime beauty and the South African seamers hit back hard on an engrossing second day at Newlands.