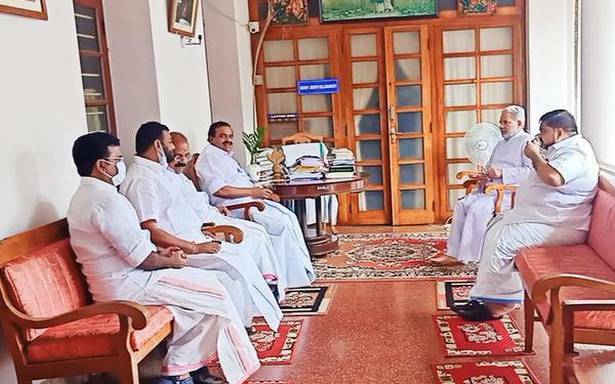 Days after Pala Bishop Mar Joseph Kallarangatt set off a controversy with his remarks about jihad by way of love and narcotics, the issue continued to boil over on Monday with more support pouring in for the prelate.

Addressing mediapersons here on Monday, Bharatiya Janata Party State president K.Surendran said the party would not stand as mute spectator to attempts to intimidate the bishop. He also highlighted the need for society to discuss and debate on the subject.

“What the bishop has said is a relevant issue and the BJP does not want to cash in on it politically. At the same time, we will not stand as silent spectators if a few goons from Erattupetta stage protest in Pala and issue threats to the bishop,” he said.

Asserting that there were ample evidence for the existence of narcotic jihad, he accused the United Democratic Front and Left Democratic Front for finding fault with the bishop to appease extremists.

During the day, a delegation from the BJP comprising senior leaders P.K. Krishnadas and A.N. Radhakrishnan visited Mar Joseph Kallarangatt at the Bishop’s House at Pala.

Meanwhile, the Nair Service Society (NSS) came up with a statement expressing concern over the forced conversion of girls. “That the terrorist activity of forced religious conversion of girls using the weapon of love or other means is indeed a matter of concern. The State and Union governments have the responsibility to find out and quell such elements,” read the statement issued by G.Sukumaran Nair, general secretary of the organisation.

Earlier in the day, Deepika daily, mouthpiece of the church, published an article by Metropolitan Archbishop Mar Joseph Perumthottam in support of the Pala bishop.

“There are a few elements who are defrauding women by pretending love and in the cover of married life to abuse them for other purposes. It could be narcotics trafficking, terrorism, religious fundamentalism, or even prostitution. No matter if it is love jihad or narcotic jihad, enslaving to such elements on one’s own or by force or fraud is dangerous to any family or any community,” noted the Archbishop.