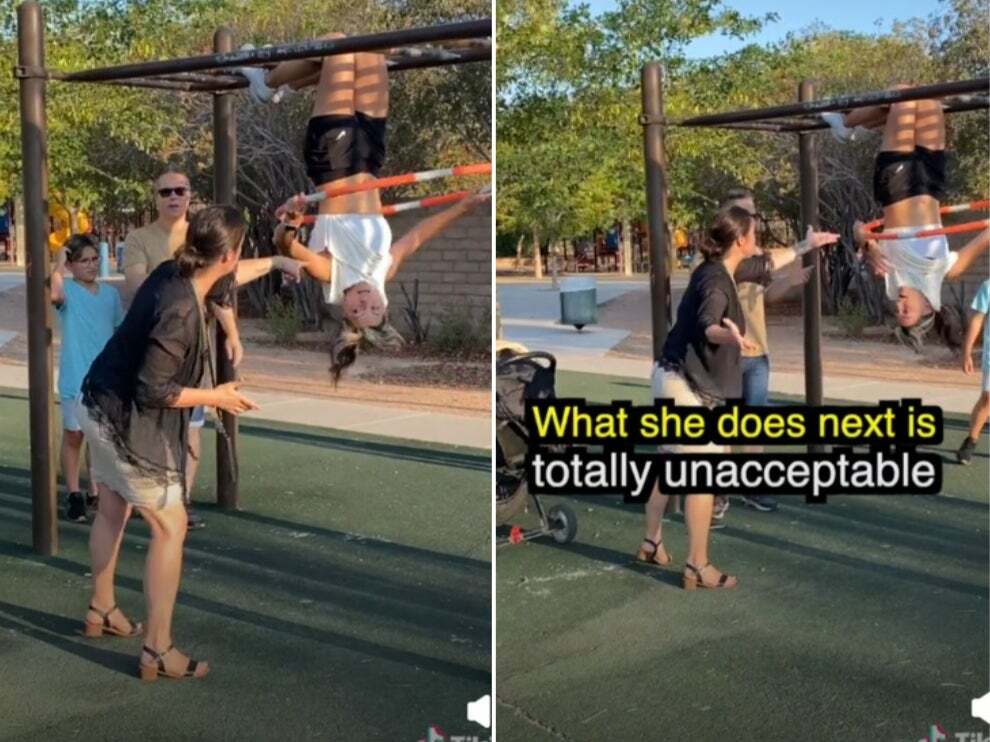 An angry woman was filmed berating another woman and telling her to “cover up” because she happened to show her sports bra while exercising in a park.

TikToker Getti (@gettishow) – the person on the receiving end of the shouting – posted footage of the entire confrontation, which began while she was hanging by her legs from set of monkey bars while using a hula hoop (a pretty impressive trick, if you ask us).

In the video, which is filmed by another man, the woman is seen wearing a pair of Nike shorts and a white shirt as she exercises. Inevitably, due to the small matter of gravity, the shirt slips down while she is hanging upside down, causing part of her sports bra underneath to be revealed.

It was this gap that was apparently enough to anger the random woman, who took it upon herself to approach the TikToker and start berating her. The clip shows her accusing Getti of being “half naked” in a “family park”, adding: “Everybody around here can see this.”

She then turns to the man who Getti is with – presumably her husband – and says: “Are you OK with this?”

As he tries to deescalate the situation and asks the women to leave, she continues to rant. “This is where kids play, this is a place for families,” she says. She then spots Getti’s son filming his mother’s moves and yells about how everyone’s always on “the TikTok.”

“I can’t believe you’re doing this in our neighbourhood park with almost no clothing,” she goes on. “That is totally revealing.”

Attempting to ignore the woman’s complaints, Getti keeps doing her exercise, but this only enrages the woman further who then encroaches on her space and grabs the hoop, shouting that it’s “unacceptable”.

“What are you doing?” both of them ask, as Getti jumps down off the bars.

She then gets up in the face of the person filming, who has intervened at this stage.

The confronting woman is wearing a knee-length skirt and partly sheer blouse.

Seemingly touching a nerve, the woman grabs the hula hoop again and launches it across the park, adding: “This is what you can do for a TikTok.”

“Find somewhere else to bare your belly,” she then snaps, causing Getti and her husband to admit defeat and leave the park.

Understandably, Getti described in her video caption how the incident left her “shaken.”

Since posting the clash to TikTok, it has been viewed 1.8m times, with over 240,000 likes along with thousands of comments from people sharing their shock at what happened.

One person wrote: “Has she never been to a public swimming pool?! Smh.”

“‘Little kids can see you,’ good and they’ll think she’s cool as hell for being able to hula hoop UPSIDE DOWN!!” Another person said.

Someone added: “I could never imagine thinking someone’s stomach is more harmful to a child than her behaviour and language.”

“I can’t believe you didn’t punch her,” a fourth person replied.

This TikTok account is promoting the only acceptable way of catcalling