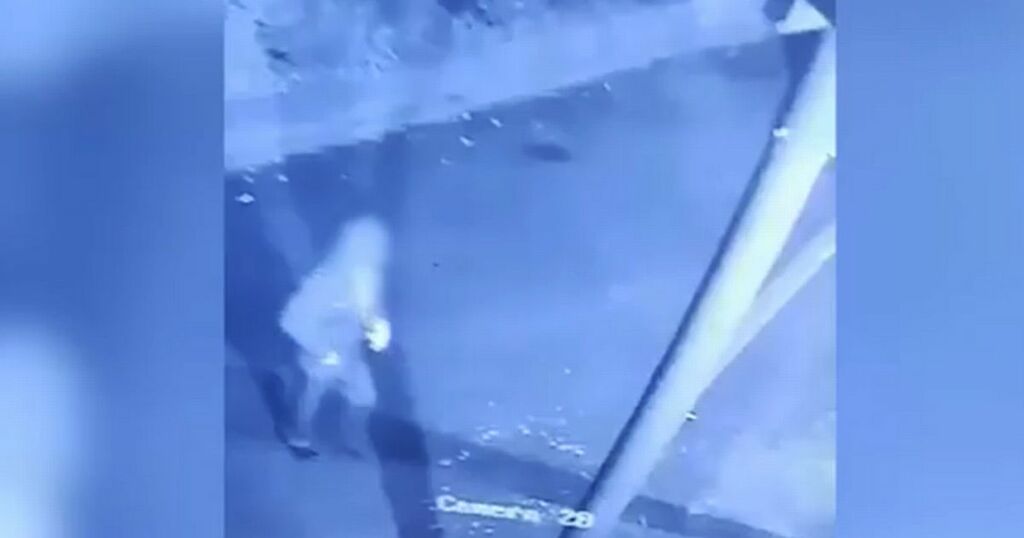 This is the moment a hooded figure approached a mosque the night it was targeted in an arson attack.

They walk towards the building before appearing to crouch down.

They then slowly and calmly walk away. The footage was shared with the Manchester Evening News by the mosque.

A fire was started at the doors to Didsbury Mosque at around midnight on Friday night.

READ MORE: In the wake of a vicious hate crime, once again, Mancunian solidarity won

Greater Manchester Police say it is being treated as a hate crime.

Two men who were passing threw their coats on the fire and tried their best to put it out.

Fire crews arrived within minutes and extinguished the fire, which was prevented from spreading.

Fortunately, no one was hurt.

Scorch marks were visible on the door and burnt canisters were found on the ground outside.

GMP said no arrests had yet been made, but that they had seized CCTV and items from the scene as part of their enquiries.

On Saturday dozens of people gathered for a vigil outside the mosque at the junction of Barlow Moor Road and Burton Road - to send a message that the area would not be divided.

Mosque leaders thanked the four Good Samaritans for stepping in.

Paying tribute to them in a speech on the steps of the mosque, chair trustees Fawzi Haffar, said they 'saved the building for the community'.

He said he wants to track them down so he can say thank you.

Speaking to the Manchester Evening News , he added said: "Without a doubt, they saved it.

"This is an old building and the door is wooden. If they hadn't done what they did, this could have been so much worse."

Mr Haffar said he was left 'wanting to cry' after more than 100 people gathered outside the mosque for the impromptu event organised by Greater Manchester Stand Up to Racism.

"It was very overwhelming," he added.

Inspector Shoheb Chowdhury, from GMP's south Manchester district, said: "This is a dreadful incident which will no doubt have caused concern in the community and we are doing all we can to find who was responsible and continue to engage the mosque and those concerned in the community.

"Detectives have been carrying out enquiries and have already seized CCTV and items from the scene as part of the investigation.

"Our officers will be in and around the area today and anyone concerned can speak to officers who will address any concerns.

"Hate crime will not be tolerated. We're fortunate in that Greater Manchester is a diverse place that our communities call home and those who wish to commit a crime motivated by hate will be brought to justice."

Anyone with any information that may assist with our investigation can report it online or by using our LiveChat service at www.gmp.police.uk or by calling 0161 856 4973.