Several people have been injured after a Chinese passenger jet caught fire shortly after takeoff.

Dramatic footage captured the moment the Tibet Airlines jet erupted into flames shortly after 8am local time on Thursday at an airport in the southwestern city of Chongqing.

The Airbus A319-115 jet had 113 passengers and nine flight crew onboard, all of whom were safely evacuated with some taken to a hospital with minor injuries, the airline said in an statement.

The plane itself had sustained fire damage, it said.

"In the process of taking off, the flight crew discovered an abnormality with the aircraft and stopped the takeoff, after which the aircraft left the runway," the statement said.

More than 40 passengers with minor injuries were taken to hospital, according to a statement from the Chongqing Jiangbei International Airport.

Some 36 people suffered bruises and sprains during the evacuation, the Civil Administration of China (CAAC) said.

"According to the flight crew, the plane experienced an anomaly during takeoff. They stopped the takeoff following the procedures," the CAAC said.

"After the plane skidded off the runway, the engine scraped the ground and caught fire. (The fire) has been extinguished."

The flight was bound for Nyingchi in Tibet.

The incident follows the crash of a Chinese Eastern Boeing 737-800 in southeastern China on March 21 in which all 132 people on board were killed.

It remains under investigation.

The plane went into a sudden nosedive and slammed into the ground in a mountainous area. 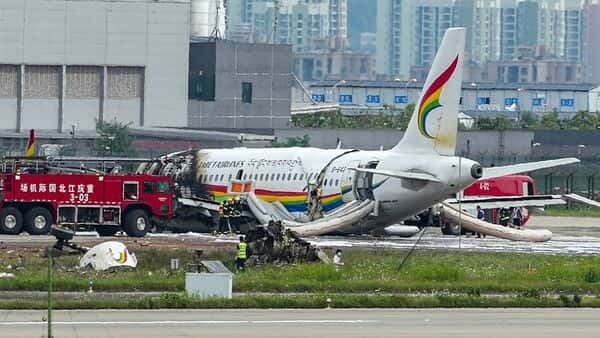 The Independent UK
Plane Veers Off Runway in China and Catches Fire; 36 Injured

A Chinese passenger jet veered off the runway during takeoff and caught fire on Thursday, sending black smoke billowing into…