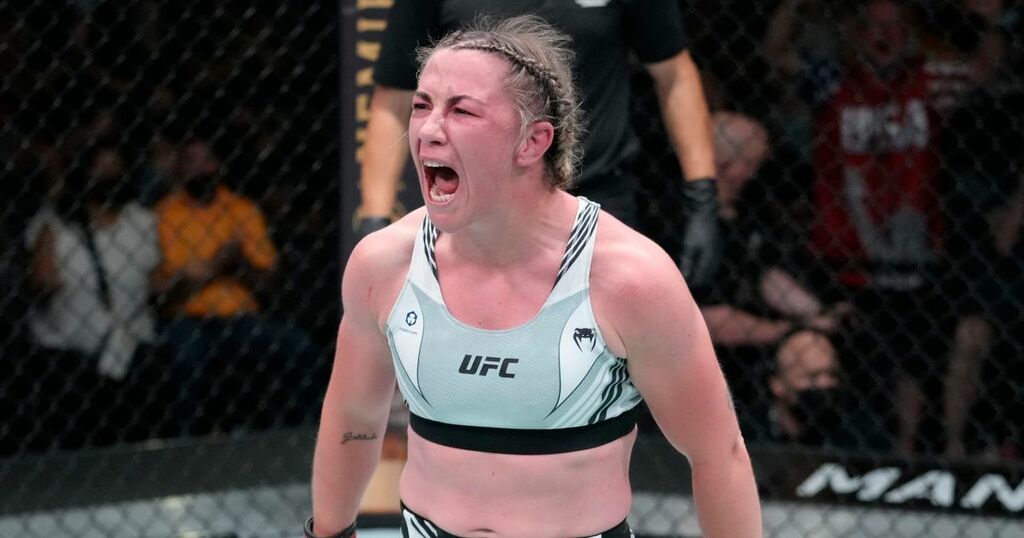 UFC star Molly McCann was overcome with emotion after winning the UFC's 'Fight of the Night' bonus on Saturday.

McCann defeated Ji Yeon Kim for her first victory since 2019, and in the process put in a performance worthy of winning the massive $50,000 bonus prize.

The Liverpool native was caught on camera being told that she had been given the award, and broke down in tears on the streets of Vegas after receiving the news.

And speaking with Mirror Fighting , McCann explained that the reaction came from much more than simply the financial reward.

"I promised the best me was coming," she explained. "I think it was just that I felt so much gratitude.

"The big wigs finally saw my worth and I believe when you get that 'Fight of the Night' bonus sometimes it's better than 'Performance of the Night'.

"It's three slugged out hard rounds, and I've been pipped to the post a few times, especially at UFC London when I broke my orbital."

McCann picked up the horror injury in a fight with Priscila Cachoeira at the O2 Arena in 2019.

But Jorge Masvidal and Darren Till's stunning main event clash proved too entertaining to ignore and they took the $50k bonus.

"So to finally get recognition from my peers, colleagues and people in charge of the UFC, you couldn't put it into words," McCann continued.

"But then the journey that I've been on and how fight week went and how prep had been, it was just deserved."

McCann now believes that she deserves to return to the flyweight rankings, and given the state of the division could be in line for a big fight next time out.

She's nursing a minor hand injury and a hurt jaw, but despite the gruesome contest on Saturday night McCann is plotting a return before the year is out.

Who should Molly McCann fight next in the octagon? Let us know in the comments!

"I don't see why I wouldn't be ranked," she says. "I struggled without the crowd.

"But you saw with the crowd how I'm able to turn it on.

"I need the hand to recover, and my jaw, but I'll be straight back out - I haven't put much weight on, which I'd normally do.

But McCann will insist that her next opponent is 100 per cent clean of any performance enhancing drugs.

And she would be willing to say no to a challenge for the first time in her career if it comes from anyone with a chequered history when it comes to fighting on a PED.

"I've never turned a fight down," she insisted. "But I'd like to not fight drugs cheats any more.

"I'd like to fight people who are definitely clean and even those who have a big long reach, I can still absolutely put a pasting on them."

McCann was joined on the bonus list by fellow Brits Tom Aspinall and Paddy Pimblett.