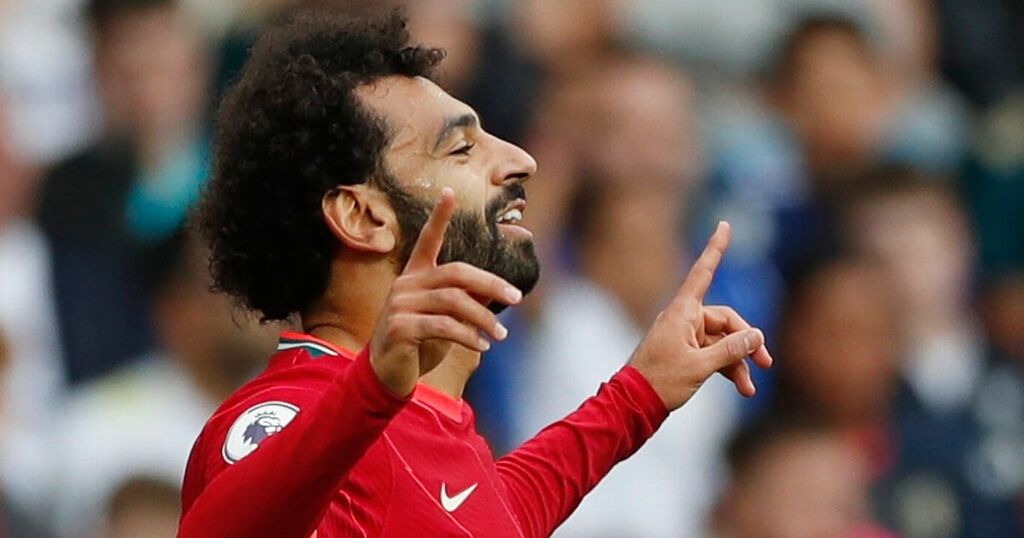 Mo Salah put himself alongside some elite company after joining the Premier League’s 100 club.

Incredibly, Salah has scored a century of league goals in just 162 games and only Alan Shearer, Harry Kane, Sergio Aguero and Thierry Henry reached that milestone in fewer games.

That is what underlines Salah’s class, he was magnificent again at Elland Road and is the reason why Liverpool must not be overlooked as being back among the title challengers this season.

It will be remembered also for the shocking injury to Liverpool teenager Harvey Elliott after one of those horrible moments when other players look away in horror and it is not replayed on TV.

Elliott, 18, has been a revelation this season, seizing his chance in midfield and it is heartbreaking to see a young player cut down. Liverpool will be desperate for it not to signal another spell of bad luck with injuries.

But Liverpool are in the groove as they are now 14 games unbeaten in the Premier League, a run which stretches back from last season and has put them joint top with Manchester United and Chelsea.

Liverpool managed a remarkable 30 shots (nine on target), Sadio Mane missed a glut of chances before finally scoring in injury time as they made it look relatively easy.

That is no mean feat at Elland Road where the noise, atmosphere and passion is always a test for even the best teams. But Jurgen Klopp’s men passed it with flying colours.

Liverpool were sharp, dangerous and if they had been more ruthless then it could have been a more emphatic scoreline.

Leeds deserve credit for never giving up, always pushing until the end and yet ultimately it was Liverpool’s extra quality which told.

It does look worrying for Leeds as it is the first time they have failed to win any of their opening four games in the top flight since 1958 and they have conceded 11 goals in the process.

Liverpool dominated midfield with Fabinho at his commanding best, they tore forward and opened Leeds up at will with Salah, in particular, looking razor sharp.

Liverpool went ahead after just 20 minutes when Joel Matip charged forward, Trent Alexander-Arnold fired in a low cross and there was Salah to score from point blank range.

Mane missed a sitter as he looked like a player in desperate need of a goal to lift his fragile confidence. Leeds had their moments but were not clinical enough and they lost Diego Llorente to injury and he was replaced by Pascal Struijk.

Liverpool thought they were going to get a second and appealed for a penalty but Mane missed rather than get clipped in the box and Struijk stopped Salah scoring at the far post.

From the resulting corner, Fabinho saw his first effort blocked and then scored with the follow-up after 50 minutes. Liverpool were in command.

Elliott’s injury came after 59 minutes. Struijk challenged Elliott, his left ankle buckled under the Leeds defender and the whole stadium looked on in horror. Struijk was sent off, Leeds fans largely clapped Elliott down the tunnel on a stretcher and both teams looked shell shocked.

Elliott is one of English football’s brightest young talents, do not bet against him for the 2022 World Cup squad and he will be back.

Leeds striker Patrick Bamford nearly caught out Liverpool keeper Alisson after Thiago Alcantara lost the ball in midfield as the home side tried to come back. But Liverpool’s win was never in doubt.

Mane missed another chance before, finally, his luck changed. Substitute Jordan Henderson found Thiago, his clever flick set up Mane who scored with a low shot on the turn to seal victory.