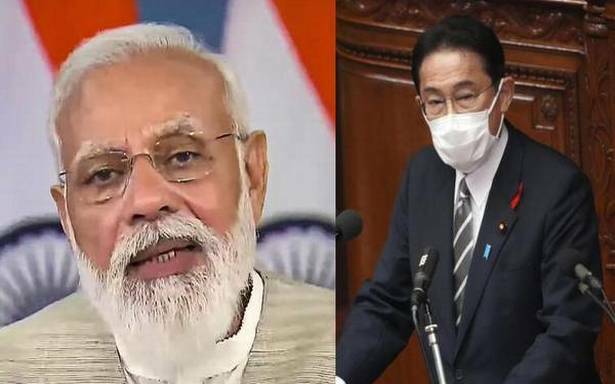 Prime Minister Narendra Modi spoke to new Japanese Prime Minister Fumio Kishida on Friday evening, in their first conversation since the latter took charge this week, committing to strengthen bilateral relations and opposing the use of military and economic force in the Indo-Pacific region through the Quad with the U.S. and Australia.

“The leaders discussed the increasing alignment of perspectives, and robust cooperation, between India and Japan in the Indo-Pacific region. They reviewed the progress of cooperation under the Quad framework in this regard,” said a Ministry of External Affairs (MEA) statement, which gave details of the talks that lasted about 25 minutes. It stated that Mr. Modi invited Mr. Kishida, who has met him earlier in his role as Foreign Minister, to visit India for a summit.

A statement issued by the Japanese Ministry of Foreign Affairs, noted, “Both leaders shared their strong opposition to any unilateral attempt to change the status quo by force and to economic coercion, while confirming that the two countries would deepen cooperation on economic security such as through resilience of supply chains”.

The statements are significant as tensions have been rising in the South China Sea over a record number of Chinese jets being flown into Taiwan’s Air Defence Identification Zone (ADIZ) in the past week, after recent military exercises involving the U.S., Japan, the U.K. and other allies in the region. On Tuesday, Mr. Kishida, who was earlier known for a moderate foreign policy line and now taken a tough posture on countering China, spoke to President Biden and Australian Prime Minister Morrison. His call to Mr. Modi also follows a day after his conversation with Russian President Putin.

Mr. Modi and Mr. Kishida discussed plans for celebrating the 70th anniversary of the establishment of diplomatic relations between the two nations next year, and promote cooperation on “green technology, digital, healthcare, enhancing connectivity”. They discussed the construction of the Mumbai-Ahmedabad High Speed Rail, which is a Japan-India flagship project. It is marked by delays over land acquisition and pricing issues, which could push the project well beyond its 2023 deadline.

A visit by Mr. Kishida to Delhi has been pending since former Prime Minister Shinzo Abe cancelled his visit over the Citizenship (Amendment) Act (CAA) protests in Assam and his successor Yoshihide Suga had to put off his visit due to the Coronavirus pandemic. Mr. Kishida, who won the leadership election for his party, the LDP, last week after Mr. Suga stepped down from the post, is expected to call for general elections to be held by the end of this year. While he may be unable to travel before that, Mr. Modi and him discussed holding “2+2” talks between the Foreign and Defence ministers “at an early date”.