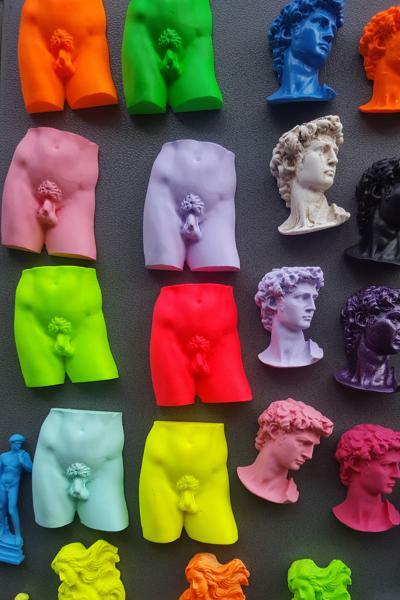 A 3D printed copy of Michelangelo’s iconic David sculpture is currently on display at the Dubai Expo — or some of it is anyway. Parts of the statue deemed inappropriate for public viewing have been concealed, much to the ire of Italy’s most outspoken art historian.

The life-sized resin replica of David, the original of which is housed in Florence’s Accademia Gallery, is on show in the Italian pavilion at the Dubai Expo. It was chosen to boast Italy’s manufacturing prowess, but it has turned out to be an unintentionally controversial choice.

Concerned about offending conservative Muslims, Expo organizers fretted over how to display the naked figure. “We even thought of putting undergarments on the statue, or changing it all together, but it was too late,” one staff member told Italian newspaper La Repubblica. "We understood too late that it was an error to bring a statue of a nude man to the Emirates.” The team finally settled on the decision to block the warrior’s private parts from view completely.

The duplicate of the Renaissance masterpiece was placed inside an octagonal glass gallery with viewing platforms on two floors. The lower provides a view of David’s athletic legs as he readies to battle the giant Goliath and the upper is positioned at head height.

David’s penis and buttocks remain behind a stone panel thus ensuring no visitors are embarrassed by the sight of his nudity. A ledge on the upper level also prevents viewers from peeking over to get a glimpse.

The statue’s manhood can only be seen by standing close to the glass on the lower floor and peering upwards. This area, however, is apparently only accessible to those with authorization.

Though perhaps a drastic decision, organizers deemed it necessary considering public nudity is forbidden in the United Arab Emirates. But this argument did not convince notoriously vociferous art critic Vittorio Sgarbi. He condemned the censorship as “grotesque and ridiculous.”

“This is a biblical theme, not a pagan theme, so cancelling a part of Michelangelo’s David at the Italian pavilion of the Dubai Expo is just bowing to their religion and culture,” Sgarbi told Adnkronos.

Davide Rampello, the director of the Italian Pavillion, defended the decision suggesting instead that it provides a novel way to look at the world-renowned statue. David is supposed to look like an actor in a theater and viewers have the unique opportunity to look the warrior directly in the eye.

The David duplicate on display in Dubai was created by first laser scanning the original 1504 sculpture and then producing various parts using a 3D printer. The 17-foot tall replica is hyper-realistic, complete with stains, cracks and other imperfections.