Miyan Mishk Mahal is a picture of neglect 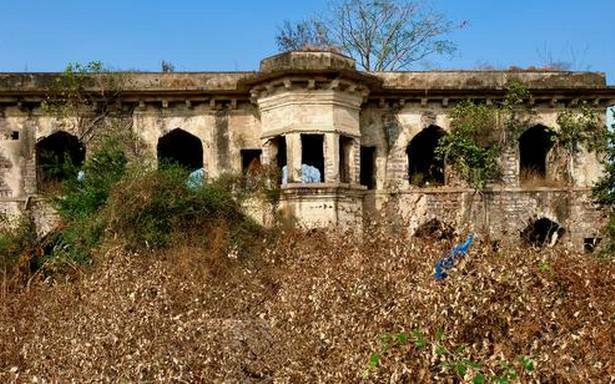 Days after word spread about the clean up of Miyan Mishk Mahal by the GHMC, the ground reality is completely different.

The inner chambers of the 350-year-old palace of Miyan Mishk was covered in soot after the civic workers lit up the waste there.

The massive palace complex in Attapur, off the road near pillar number 137 of PVNR Expressway, remains littered with liquor bottles, building debris and domestic trash that the nearby residents dump every day.

“There are snakes on the ground floor and that’s why, we don’t go there. During Sankranti, we climb to the terrace and fly kites,” said Zaheer Khan, a Class IX student, who lives in the neighbourhood.

The two-storied palace has a staircase in the middle to take visitors to the upper storey and terrace. According to historical accounts, the palace was built by Abyssinian general of the last Qutb Shahi king Abul Hasan. While the masjid built by the general on a land grant in 1674 is in a good condition near Purana Pul area, the palace has become rundown in the absence of maintenance.

Not a protected site

The Miyan Mishk Masjid is among the list of 27 sites that the State government is planning to protect and carry on conservation effort. However, the Miyan Mishk Mahal doesn’t find a place in the present list of protected sites.The building is a Grade-I protected site under the HUDA Heritage Regulation 13, which has been upheld by the Telangana High Court in its ruling on the Irram Manzil case.A 2004 satellite image shows how the palace was protected by a walled compound enclosing 10-acres before a road was laid from one end to the other breaking the symmetry of the complex. Now, it is an asphalted road with heavy traffic.

While a razor wire fencing used to protect the site earlier, now it’s a free-for-all dumping site as well as an open toilet that gives a lie to the city’s Outdoor Defecation Free status. Construction material, agriculture equipment, trash and even large rocks have been dumped around the site.

Despite the absence of any conservation effort, Miyan Mishk Mahalretains traces of its glory with delicate limestone stucco work that has survived centuries. It remains to be seen how long the palace remains intact despite the creeping encroachments all around it.