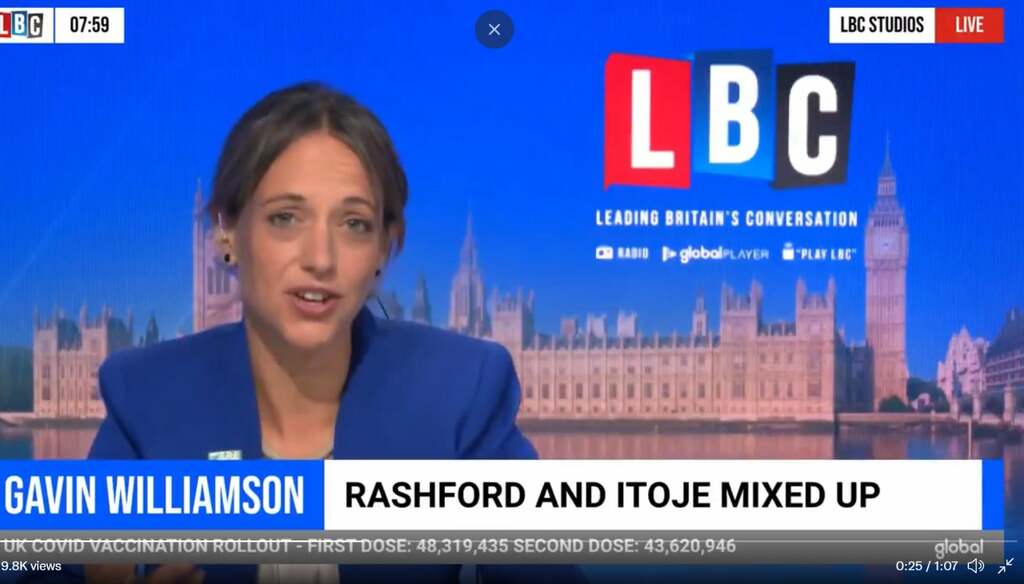 A government minister has said she “doesn’t know” if Gavin Williamson is “racist or incompetent” for confusing two Black sports stars.

In a car crash interview with LBC’s Nick Ferrari, care minister Helen Whately spluttered and tried to dodge the question about Williamson’s embarrassing mix-up between Marcus Rashford and Maro Itoje (as you don’t).

When asked about the error, Whately replied to Ferrari: “I’ve probably seen no more of this than what you’ve seen.”

Asked again if the blunder was through “racism or incompetence”, she simply said: “Honestly, I don’t know.”

She added: “He’s put out his explanation and there’s really nothing more I can say about it.”

Ferrari then asked if that meant Williamson could be racist. Whately replied: “I can’t believe for a moment that he is. I think that sounds highly unlikely.”

“So he’s incompetent then!” Ferrari replied.

A visibly frustrated Whately said: “You’re trying to put me in a trap.

“I don’t accept the choice that you’ve offered me there.”

It comes after Williamson was left with his head in his hands after confusing Rashford and Itoje. In an interview with the Evening Standard, Williamson described how he had ‘met’ Rashford – the Manchester United player who forced the Government into a U-turn on free school meals provision during the pandemic – over Zoom.

Except he hadn’t. Williamson’s team then told the paper that he had actually met rugby player Itoje, who plays for Saracens and England.

People were embarrassed and hurried to criticise Williamson for his mistake, while Rashford and Itoje themselves mocked the education secretary.

Perhaps they are being harsh, though. Williamson famously has a bad memory. He can’t remember his on A-Level results after all.

Anyway - reacting to Whately adding to the gaffe, people cringed as one:

Asked on LBC if Mr Williamson was either racist or incompetent, care minister Helen Whately said: “Honestly, I don’t know.”https://t.co/PThr4iVkub

We are blessed with some truly memorable ministers.

Jeez, Helen's quick on her feet. 🙄

NF: "So he's incompetent then!"

Gavin Williamson slammed for comments on schools reopening and Covid