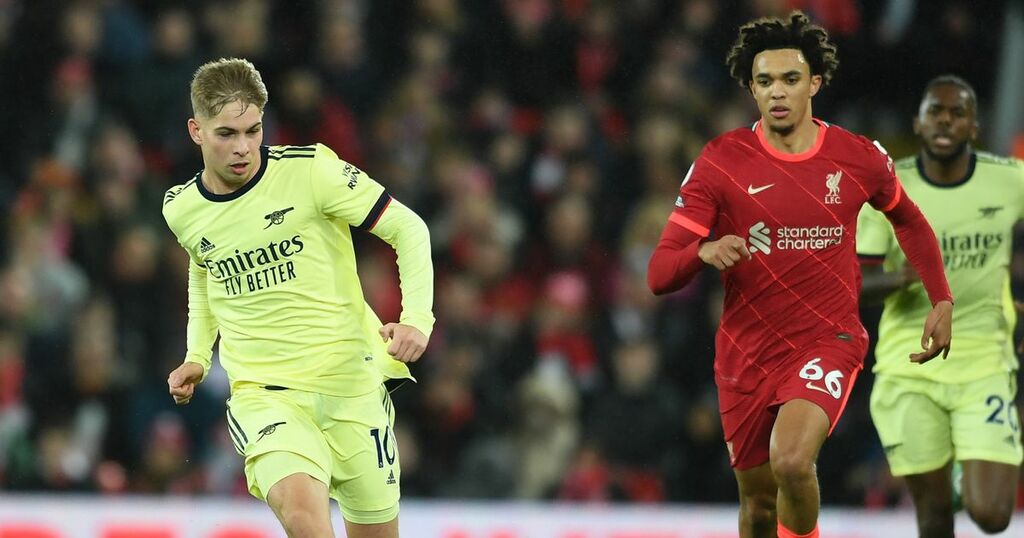 Smith Rowe has scored in three of his last four Premier League matches for the Gunners - with his fine form earning him his first call-up to the England senior squad, where he did not disappoint.

The 21-year-old made his first Three Lions start away at San Marino and found the back of the net in a thumping 10-0 win against the European minnows.

The Hale End academy product has become one of the first name on the team sheet under Mikel Arteta.

Petit, who represented Arsenal for three years between 1997 until 2000, has now drawn comparisons between Smith Rowe and England icon Gascoigne.

“I think Smith-Rowe is improving because of his character, humility and desire,” Petit said to bookmakers.co.uk. “He’s got a lot of ambition and he has so much support from the crowd because he plays with love on the pitch.

“He has shown so many qualities and improvements, just like Saka did, and they are the two best examples from the academy right now and could be the future of England as well.

“If Smith-Rowe can continue to improve on his statistics in terms of goals and assists and maintain his personality then he can be Arsenal’s number 10 for some time, but he needs to stay focussed because he can go missing for 20 minutes here or there. But if he can do that then he has a big future.

“He reminds me sometimes of Paul Gascoigne when he has the ball at his feet and when he runs with it, he’s a natural player in his mind and in his feet.”

Petit also spoke about Arsenal this season, and the advantage they have over their rivals in securing European football. The Gunners are currently not competing on the continental front and Petit thinks that could benefit Arteta and his side in the coming months.

“His body language now compared to August has changed so much. You only have to look at his face to see it," Petit said on Arteta.

“You could see in his face in the first few weeks of the season that he was under a lot of pressure, he looked tired, annoyed and angry.

“Now, when I look at him, everything has changed. He’s a young manager but the way you show your emotions can have an impact on your players, especially young players like he has at Arsenal. But he’s improving as a manager and so are his players.

“The big thing for Arsenal this season is not playing in Europe, which means more time to recover and work towards the weekend.

"It’s a big chance for Arsenal to focus domestically and over the next five weeks or so we’ll see how much of a chance they have of competing for the top four. It will be very difficult because there’s a lot of competition.”