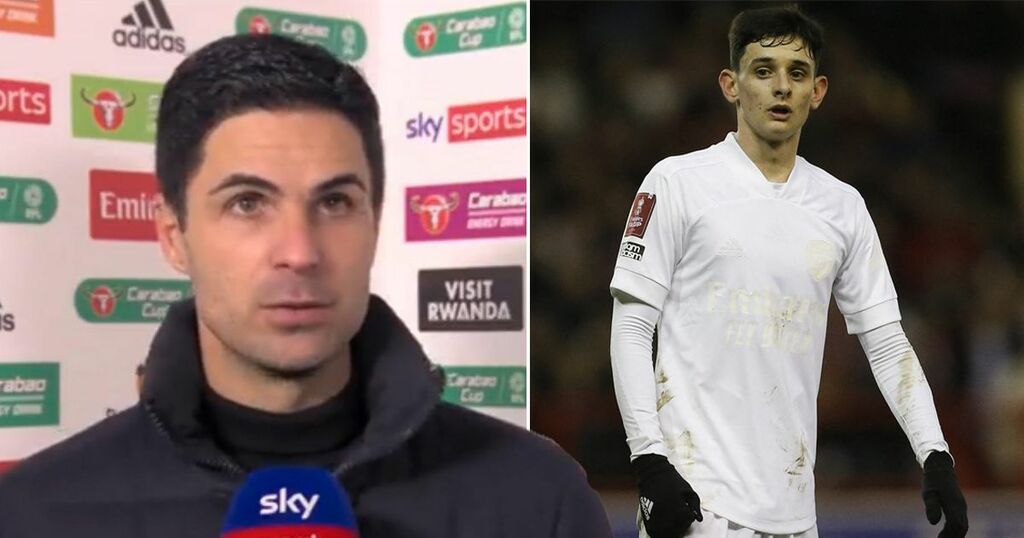 Arsenal manager Mikel Arteta has been warned about throwing Charlie Patino in at the deep end against Tottenham Hotspur after the teenager endured a difficult full debut for the club.

The Gunners face a midfield dilemma ahead of Sunday's North London Derby, with suspension, illness and international duty depleting Arteta's side.

Thomas Partey and Mohamed Elneny are away at the Africa Cup of Nations, while Martin Odegaard missed the midweek Carabao Cup clash with Liverpool after a positive Covid test and Granit Xhaka picked up a red card in the same game which will rule him out this weekend.

Patino could be a candidate to start alongside Albert Sambi Lokonga in the middle, having done so in the FA Cup defeat at Nottingham Forest, but former Arsenal midfielder Paul Merson has urged caution in Arteta's treatment of the youngster.

Should Charlie Patino start against Spurs? Have your say in the comments section

"The lad Charlie Patino played the other day - I felt sorry for him," Merson said on Sky Sports before the Liverpool game.

"If you’re going to make your debut for a big club like Arsenal you’ve got to be around top draw players, you can’t come into a team of bit-part players and people looking after their own job.

"You’ve got to be fair on the youngster. You’ve got to play him in a team where you’ve got experience around you. Even if it’s one experienced midfield player, like a Xhaka, who can talk to you through the game. I felt sorry for him and the younger lads in the team."

Patino played more than an hour against Forest, leaving the field before the Championship side scored their late winner, and Xhaka's suspension means the experienced player cited by Merson will not be available.

It was only his second appearance for the Arsenal first team, after he made a goalscoring cameo from the bench in the Carabao Cup quarter-final victory over Sunderland.

The 18-year-old was one of four academy players on the bench at Anfield, along with Salah-Eddine Oulad M'Hand, Mika Biereth and Omari Hutchinson, highlighting Arsenal's lack of available numbers.

Bukayo Saka spent much of the Liverpool game in a deeper midfield role than usual as Arsenal attempted to regroup, while defenders Ben White and Calum Chambers have also played in the position in the past and Emile Smith Rowe could also return against Tottenham after sitting out the last two matches.

"He felt something in the last minutes, he was really fatigued," Arteta told reporters after Saka made way for Nuno Tavares in the closing stages of the match.

"I don’t know. He’s a young boy and he recovers really quickly. But he’s played a lot of minutes in the last few months so let’s see who is available."