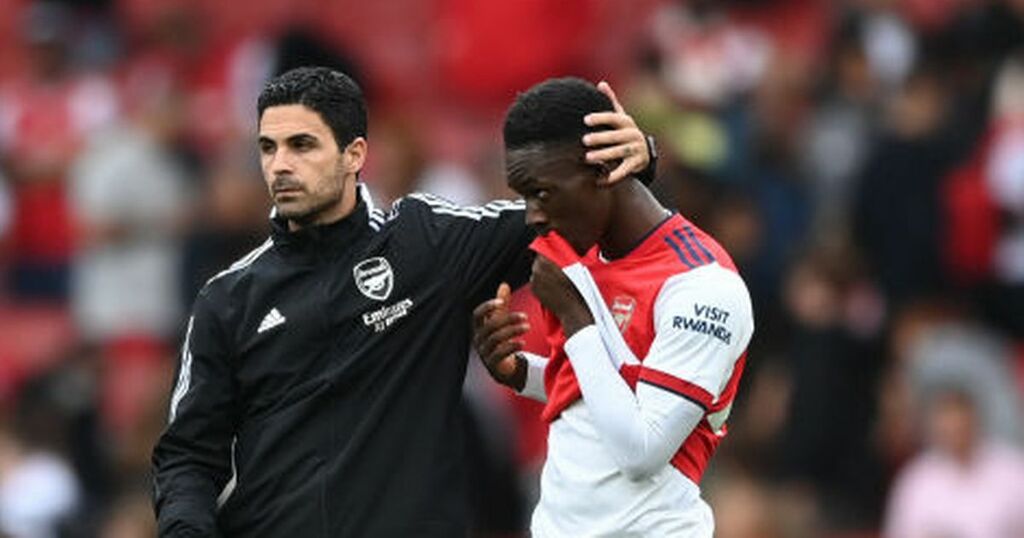 Folarin Balogun's brother declared Mikel Arteta's system "doesn't work" as he railed against the Arsenal manager for his treatment of the striker.

Balogun, 20, started the Gunners' opening game of the season and failed to make an impression before he was taken off in the 2-0 defeat by Brentford.

The England Under-21 star scored two goals in six senior games last season and is considered one of the most-exciting youngsters to emerge from the club's Hale End academy in recent years.

But Royce Balogun is convinced Arteta's tactics are failing to get the best out of his brother - or any of Arsenal's forwards.

He told What The Footie Podcast : "When you look at that striker problem, in terms of chances created, it’s not just Folarin, it was there when (Gabriel) Martinelli was playing there, when (Pierre-Emerick) Aubameyang was playing there… the system doesn’t work.

"You can’t blame one player for that, it’s more the actual systematic thing.

"Whenever I talk to Folarin I tell him to keep going but the system just doesn’t really work at the moment.

"Soon it will work, there will be a movement and you’ve got to be ready when it does.

"At the same time, there’s nothing really you can do, you just have to support, keep on talking and keep telling him to keep maintaining."

Arsenal failed to score in their subsequent defeats by Chelsea and Manchester City, but Aubameyang's goal saw them edge out Norwich City on Saturday.

Balogun's only other senior appearance this season was a late cameo in the 2-0 loss to Chelsea and he spent the weekend with the Under-23s in Premier League 2.

How did you rate Folarin Balogun's performance against Brentford out of 10? Comment below.

The youngster sent Arteta a timely reminder of his talent with two goals in a 3-1 victory over Manchester United Under-23, and Royce Balogun insists more first-team minutes are on the way for his brother.

"It was his time, it was really deserved, it wasn’t by luck or by chance, he fully deserved that chance," said Royce of Folarin's start against Brentford.

"It was a good game for him, it was a baptism of fire, I think it was something he needed, he needed to see that this is the level.

"I think him going through that really showed he’s just started, it’s just the beginning, there’s always the next step, to me you’ve never made it until you retire, until you’re finished and you can sign off and say, ‘this is my career, my stats, my numbers’, that’s when you can see you’ve made it, you’ve done your career.

"I think the tactics and the system… I’m not going to say much, but to see him on the pitch I was really proud of him."