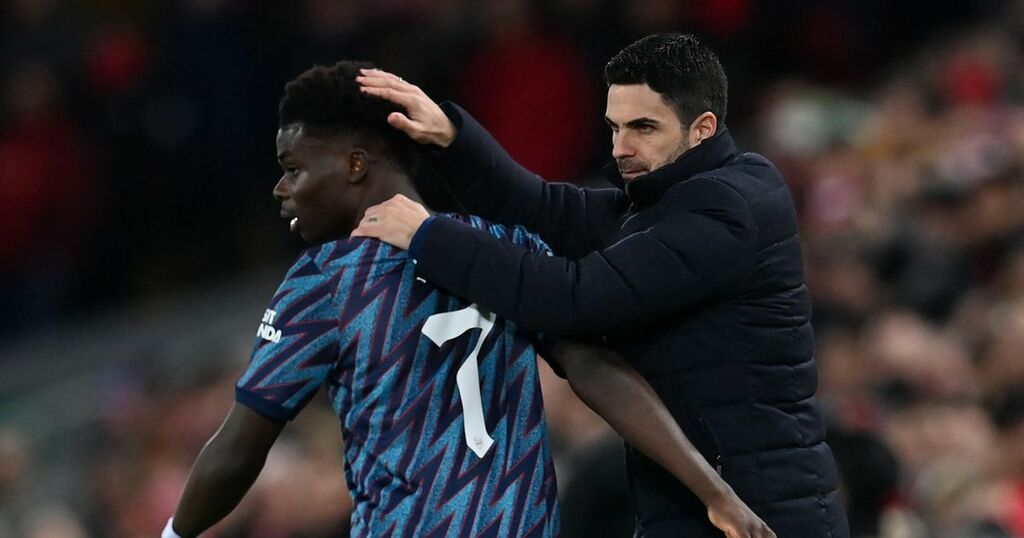 Mikel Arteta remains unsure as to whether he will have Bukayo Saka available for Sunday's north London derby.

The Arsenal winger was forced off in the Carabao Cup stalemate with Liverpool at Anfield.

Saka was able to walk off in the latter stages but faces a race against time to face Tottenham.

The Gunners are already dealing with a host of absentees due to AFCON, Covid and injuries but could be dealt a further blow.

Saka continues to grow in stature and is a leading light for Arteta's side, scoring in the 3-1 win over Tottenham at the Emirates back in September.

Now though he could join a host of other players on the sidelines for their clash with Spurs.

"He felt something in the last minutes, he was really fatigued," Arteta told reporters regarding Saka. "I don’t know. He’s a young boy and he recovers really quickly.

Have Your Say! Will Arsenal finish in the top four? Tell us your prediction here.

"But he’s played a lot of minutes in the last few months so let’s see who is available."

Arsenal are looking to continue their top four push when they make the short trip to the Tottenham Hotspur Stadium on Sunday afternoon.

The Gunners hold a two-point lead over their neighbours but have played two games more.

Arteta's team battle to a morale boosting draw with Liverpool on Thursday night despite being down to 10-men for over an hour.

The Spaniard insists their depleted squad is no excuse come Sunday however.

"We came here (to Liverpool) and we were missing nine or ten players already," claimed Arteta.

"We don’t know what to expect the next day, so we cannot use that as an excuse."

The Arsenal boss also refused to rule out the possibility of Arsenal's derby clash being called off due to a player shortage, which has been a regular occurrence in recent months.

He said: "I don't know. It's a possibility in every game, from our side and the opponent's side because of the amount of issues happening every week."

Tottenham boss Antonio Conte is yet to lose a Premier League game since taking charge.

He did see his side limp out of the Carabao Cup on Wednesday night however.