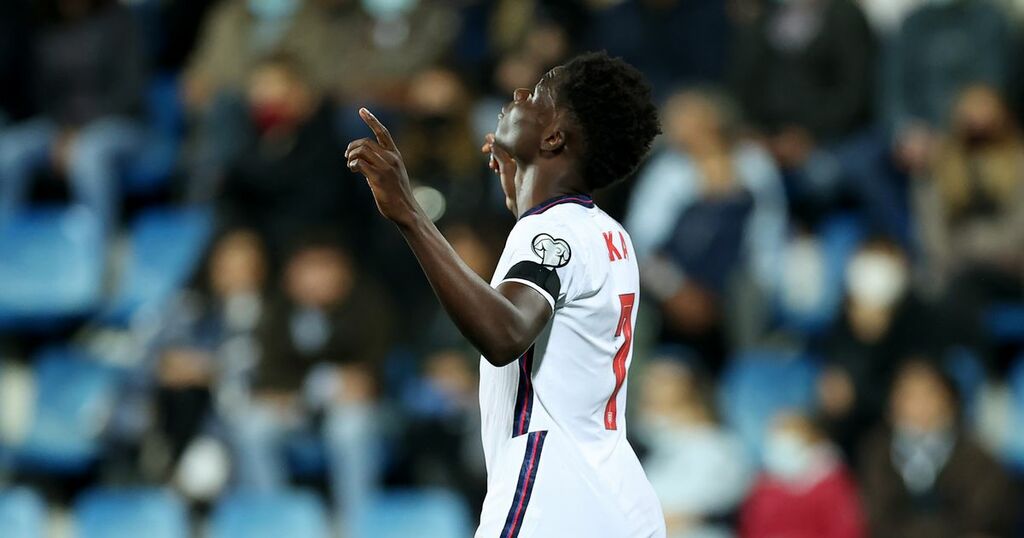 No matter where you put Bukayo Saka on the pitch, chances are he's going to be a very good player.

The 20-year-old only made his Premier League debut on New Year's Day in 2019, but since then he has gone to play left-back, right-back, central midfield, left-wing, right-wing and number 10.

In that time he has won an FA Cup and a Community Shield, started a European Championship semi-final, been nominated for the Golden Boy award and been crowned Arsenal's player of the season, proving he really can do it all.

Where exactly his best position is, though, is still up for debate.

While it seems that thanks to the signings of Nuno Tavares and Takehiro Tomiyasu this summer, Saka's days of playing as a full-back are long behind him, he is yet to have really found a home along the front line in a Gunners shirt.

In an England one, though, the exact opposite is the case.

Despite coming into the squad initially as a left-back towards the back end of 2020, the 20-year-old is well and truly viewed as a righ winger by the Three Lions set-up.

Gareth Southgate has proved himself to be a fan of playing inverted wingers, and it is for this reason why Saka has excelled so much at international level.

On Saturday night against Andorra, the Hale Ender scored a second goal in as many matches for his country, making him the youngest ever Arsenal player to do so.

The fact that he's doing it from the right-wing is no coincidence.

Of course, the quality of the opposition has to be taken into account, but Saka's ability to make runs from outside to in was a consistent thorn in the side of the Andorran defence on the night.

Phil Foden was in fine form operating as England's quarter back, picking out his teammates movements in behind from deep throughout the night, with Saka a willing beneficiary.

Upon getting into the final third, the 20-year-old has the ability to go to the by-line and put in a cross with his right or cut in and shoot with his left. Ironically enough, his goal in Andorra came from an angled shot with his right proving how difficult he can be to defend against.

This ability to go either way is what sets him aside from competition at club level.

Nicolas Pepe started the season on the right wing for Arsenal, and while he has the ability to cross on his right, he rarely does, instead preferring to somewhat predictably cut inside onto his left.

It is for this reason why Saka should stay on the right when he returns to the Emirates Stadium after this current round of international fixtures.

However, as Mikel Arteta seeks to come up with solutions to Granit Xhaka's absence, there is a possibility that this will not be the case.

When the Swiss international was suspended for three matches following a red card in the 5-0 defeat to Manchester City, Arsenal opted to switch to a 4-3-3 system, with Thomas Partey as the sole pivot.

While this formation looked different on paper, it was essentially adopted to allow Martin Odegaard - situated on the left of the midfield trio - to drop into the deeper half spaces usually filled by Xhaka, so that the ball could be more smoothly progressed from defence into attack.

In this system though, with the luxury of having the ability to get more attacking players onto the pitch, Arteta opted to play Saka on the left-wing, with Pepe on the right.

The 20-year-old struggled somewhat in this role though, particularly against Burnley where Arteta was forced to defend his player post-match.

"I think there are still things to improve there, but he is trying hard," said the Spaniard.

"He is another one who struggled in the final minutes. But it's great that he's able to suffer and somehow come through that and manage these difficulties and adversities during games where it is not really going for him.

With a home game against Crystal Palace fast approaching, it seems possible that Arteta may revert to the 4-3-3 seen at Burnley, after Albert Sambi Lokonga struggled to replicate Xhaka's role in the 0-0 draw with Brighton.

Having shown once again with England that he is at his best on the right, the onus will now be on the Arsenal manager to ensure that Saka doesn't end up back on the left.