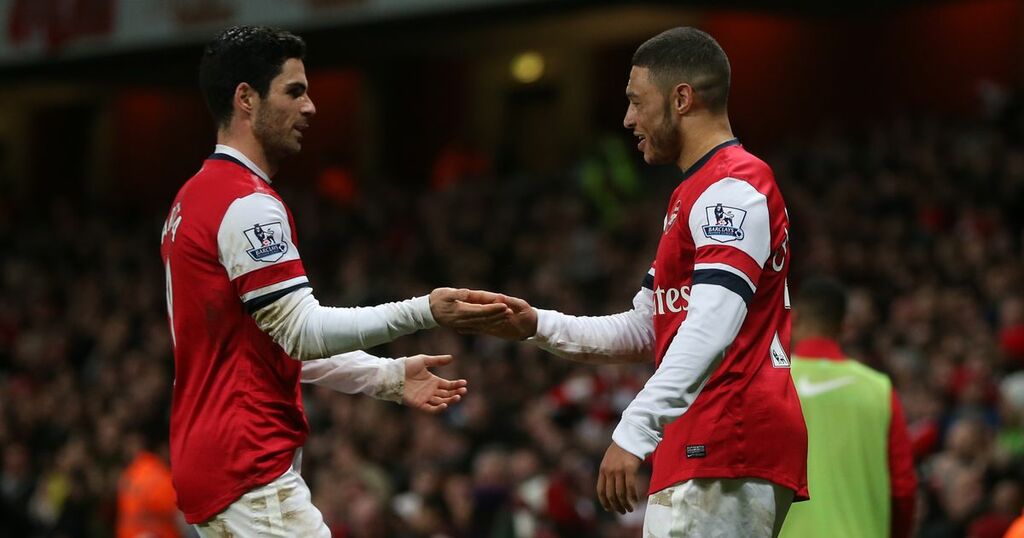 Mikel Arteta and Edu have formed a strong partnership regarding Arsenal’s recruitment over the last 18-plus months. The pair have made significant improvements to the transfers brought in when compared to previous regimes of the last decade.

However, some players linked with the club continue to divide fans. The Arsenal Way’s Tom Canton and Bailey Keogh disagreed on the pursuit of Houssem Aouar.

Whilst the talents of the player was deemed an improvement on the current roster by Keogh, Canton argued the player’s consistency was too much of a risk for the club to spend a serious amount of money to bring the Frenchman to the club.

Now the club has been linked with yet another divisive character. Liverpool midfielder Alex Oxlade-Chamberlain, according to reports, is subject to interest from Arsenal in the form of a January loan with an option to buy.

The link has left both Canton and Keogh at different ends of the spectrum regarding what Arsenal should do.

If Arsenal had a fully fit squad and the African Cup of Nations wasn't taking place during the season then maybe I would be against the club re-signing Alex Oxlade-Chamberlain.

But with our current circumstances, the signing almost becomes a no-brainer.

Thomas Partey will be at the African Cup of Nations to represent Ghana, whilst Mohamed Elneny will be playing for Egypt leaving Arsenal incredibly short in midfield.

What makes matters worse is that Granit Xhaka is likely to still be ruled out by injury in January meaning that Albert Sambi Lokonga and Ainsley Maitland-Niles will be the only available central midfielders at the club which does not bode well for Arsenal.

They are both inexperienced and it is Imperative that Edu brings in a new signing, but the winter transfer window is always a difficult time to bring in a player of real quality due to the club’s reluctance to let their players go midway through the season.

Oxlade-Chamberlain would be an excellent acquisition due to his ability if he is able to maintain his fitness. This signing only being a six-month period means Arsenal can’t lose by making this signing, due to how short his spell with the club will be.

His versatility can also be a major boost for squad depth as he can cover in multiple positions such as the wing and at full-back but most importantly he can be a ball carrier in midfield which Arsenal struggle with from deeper positions.

Since his switch from the Gunners, he has gone on to win multiple honours such as the Champions League and the Premier League, so he could inspire a winning mentality at Arsenal if he was to re-join the club.

The main doubt about signing Oxlade-Chamberlain is due to fitness concerns but only having him on a six-month loan deal should eradicate this reasoning as, without Granit Xhaka or Thomas Partey in the side, the Englishman would walk into the centre of midfield without a doubt.

I understand that the club needs to address the lack of depth in the midfield. Without Partey and Elneny due to the AFCON, and Xhaka’s fitness status uncertain, Arsenal are light.

However, this threat of a light midfield does not mean Arsenal should abandon their strategy laid out by Edu. The Brazilian has worked well with Mikel Arteta to improve the club’s recruitment policy and whilst there have been mistakes, progress has been made.

That progress would be threatened to take a risk on a player like Oxlade-Chamberlain. Ignoring the fact he has suffered serious injuries which have a long-term impact, he hasn’t progressed since leaving north London.

Positionally he has changed his role from a wide player to the central midfield responsibility he always was touted to shift to whilst at Arsenal. However, his ability hasn’t been able to develop significantly due to injury and competition.

Furthermore, it is not as if the Ox is the only option the Gunners can look at. Just 3 months ago players like Manuel Locatelli, Ruben Neves, Bruno Guimaraes and Yves Bissouma were being talked about.

Bringing in a player to provide 'cover' does not mean that a club cannot choose to still bring in exceptional talent. This is what separates the stagnating sides from those with ambitions to improve.

Oxlade-Chamberlain has had his time. Arsenal needs to continue their ruthless streak in the market and bring in a first-team quality consistent player. A player who those they are ‘covering’ become the ‘cover’ for that player upon their return.

Would you like to see Arsenal re-sign Chamberlain? Make sure you have subscribed to The Arsenal Way! The Fan Brands team along with plenty of your football.london favourites will be producing daily Arsenal content for you to enjoy including match reactions, podcasts, football fun and interviews.