Mike Pompeo: Israel might need to attack Iran due to US 'appeasement' 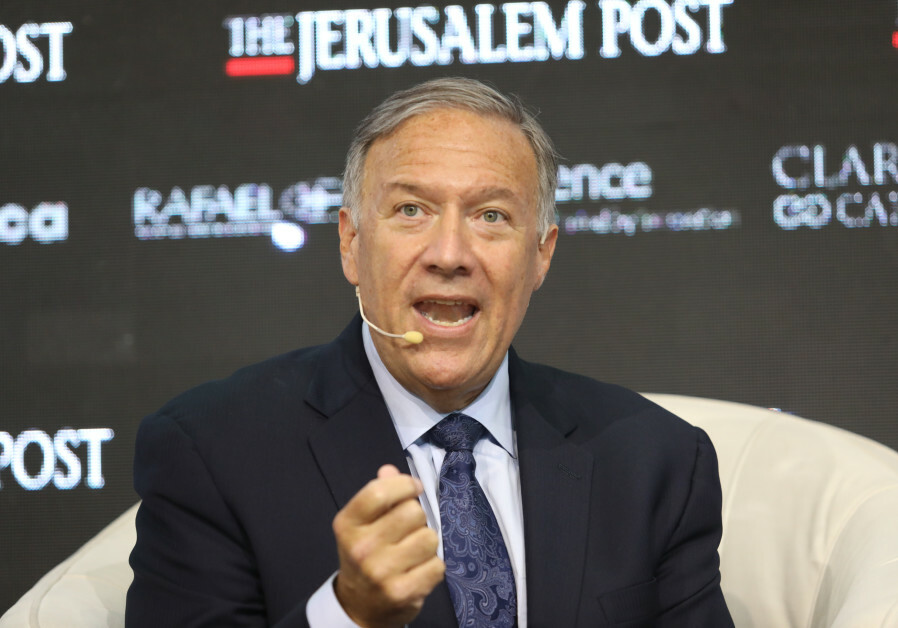 An Israeli last-resort military action against Iran is a risk of American appeasement and emboldens the Islamic Republic, former US secretary of state Mike Pompeo said Tuesday at the Jerusalem Post Conference.

Military action is “not in the best interests of anyone,” he told Jerusalem Post editor-in-chief Yaakov Katz.

Pompeo defended the Trump administration’s decision to leave the Joint Comprehensive Plan of Action (JCPOA), known as the Iranian nuclear deal, in 2018, saying the policies it adopted had made the world safer from the Iranian regime.

“We denied them resources, and we denied them the ability to build out a Gulf-threatening culpability,” he said. “The strike on [former Islamic Revolutionary Guard Corps Quds Force commander] Qasem Soleimani demonstrated our willingness to defend American interests around the world. The work we were engaged in would have prevented Iran from getting a nuclear weapon.”

In a speech to the UN General Assembly in September, US President Joe Biden said the US was seeking a return to the JCPOA.

“The current administration wants to re-enter the deal, longer, better, stronger? Well, I want it longer, I want it better, and I want it much, much stronger,” Pompeo said.

Had the Trump administration stayed in office for another year or two, the cooperation between it and Israel would have been able to prevent Iranian nuclear advancements, he said.

“We were never going to let Iran get a nuclear weapon on our watch,” he added.

Pompeo criticized the Biden administration for complying and returning to a “false principle that Israel is an illegal occupier” and called on Israel to confront that narrative, which he said is the beating heart of modern antisemitism and dubbed the “lie of occupation.”

“Occupation is a legal term whose definition does not apply to the State of Israel under the law,” Pompeo said, adding that US support of Israel is an expression of American patriotism.

“We want a legitimate discourse on policy, not a bunch of name-calling rhetoric that antisemitic squads like to throw around,” he said, referring to progressive Democrats who led efforts to defund the Iron Dome missile-defense system.

Pompeo said opening a US consulate for Palestinians in Jerusalem is “a terrible idea for the United States, Israel and the Palestinian people.”

A Jerusalem consulate would be illegal under US law, he said, adding that a US-recognized nation such as Israel should not host a consulate in the same city where a US Embassy is located.

It is in the best interest of the Palestinians to engage in conversation with Israel, Pompeo said, but Palestinian Authority President Mahmoud Abbas is not a partner for peace.

“The only way you get to a resolution in this conflict is through dialogue,” he said. “There are complex issues, but you cannot resolve them by urging your people to threaten intifada when things do not go your way.”

Asked how close Israel was to achieving normalization with Saudi Arabia, Pompeo said he is convinced there are multiple nations that will come to recognize Israel as a “partner in peace and prosperity.”

“The Abraham Accords are a demonstrable path forward that every people in this region can choose,” he said. “Israel is a nation of peace, and Palestinians can have better lives.”