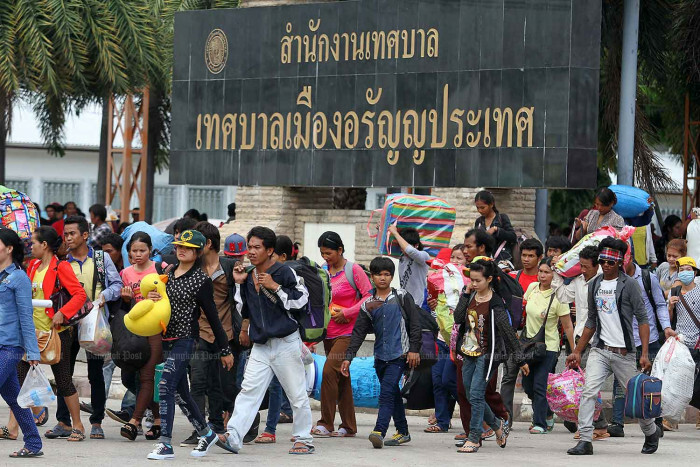 Carrying a large rucksack, I bought a ticket and walked into a crowded bus terminal in Ekamai where thousands of passengers, wearing face masks, were counting down the clock to return home for the long holidays. The vast station was packed as New Year drew closer. When I got on the bus, a familiar luk thung song was being played, evoking memories.

In the approaching dusk,
I will return home when finding fame.
I will shoulder the burden at all costs.
This countryside singer will enchant all my fans.

This snippet of Countryside Singer by the late Pumpuang Duangjan, a legendary songbird who rose from child labourer in a sugar plantation, an epitome of the rags-to-riches story, tinged with pain and nostalgia. Becoming part of mainstream culture in the 1960s, luk thung, which literally translates as child of the field, conveys the aspiration of rural migrants dreaming for a better life.

I have listened to this song untold times because I have made interprovincial trips my whole life. I grew up in Klaeng district in Rayong, but studied at boarding schools outside my hometown from an early age. In high school, I joined my friends in taking a van to cram schools in Chon Buri. Then I went to university in Bangkok where since graduation I have been working and returning to my provincial home on holidays.

As time goes by, my quiet hometown has changed and grown more urbanised. In those days, my parents would have to go shopping downtown, one hour away from home. Now our neighbourhood has department stores, hipster cafes, delivery service offices, and public parks. One thing remains the same; an urbanised town hardly offers many career choices for young people, forcing them to migrate to cities, mainly Bangkok, the hub of hopes and dreams.

In my view, rural migration is emblematic of structural problems, a mirror of how unequal development in Thailand has been. Lopsided development is a footprint of the post-WWII legacy of the United States, which used Thailand as an anti-communist base in Asia. In the process, it promoted development and economic growth to integrate the country into its camp. Field Marshal Sarit Thanarat bought into the idea of progress (phatthana in Thai) to strengthen the nation state. In 1961, the country saw the first five-year development plan -- known as the first National Economic and Social Development Masterplan.

Rapid urbanisation, growing export-related industries and demand for workers in factories all quickened rural flight. Some migrants came to work and live in the city only for a short period of time, while many stay for good, leaving behind rural backwaters.

Many decades have gone by, but development remains relatively concentrated in Bangkok and secondary cities. Lopsided development arguably boils down to Thailand's centralised power structure. Under this, the government in Bangkok oversees the whole of national development. Despite local administrative organisations (LAOs) managing their own affairs, they do not have enough autonomy and budget. That structure only widens the development gap and prompts more rural migration.

The Decentralisation Act 1999 stipulated the government's allocation of financial resources to local government organisations. However, critics say the allocation is far from enough.

Unlike big cities, some communities get small budgets, insufficient to improve basic infrastructure and public services. Under this law, a small community gets less money, so it remains a rural backwater. Moreover, the current charter strips local bodies of power, and gives more power to provincial governors.

Decentralisation can unlock the pent-up potential of rural communities. However, politicians must put aside their differences in enacting such a law. Recently, Thanathorn Juangroongruangkit, leader of the Progressive Movement, announced that a new sign-up campaign for amending Section 14 of the charter, relating to power decentralisation, will kick off in April.

It will be an improved version of the now-defunct charter of 1997 because it will scrap provincial bodies and require that governors come from elections. It will also introduce budget allocation rate that encourages rural development.

In fact, decentralisation is not only good for development; it might be a solution for Thailand's demographic shift. Last year, the country fully entered the so-called aged society, meaning those aged 60 and over account for 20% of the population. It will become a super-aged society in 2031, with 28% of the population 60 and over.

While adult workers fulfil their dreams, they can also stay close to greying family members and offer much-needed support in their final days.